Will Cannibalism In Culture Change The Unthinkable Into The Acceptable ?

"A Census Taker Once Tried To Test Me. I Ate His Liver With Some Fava Beans And A Nice Chianti." 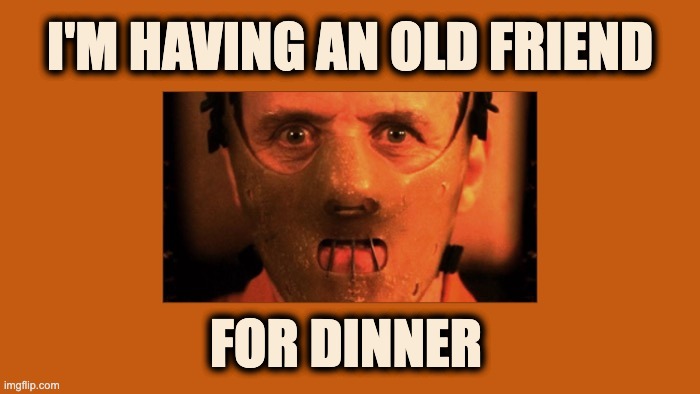 unthinkable into the acceptable

The believers in the climate change hypothesis can be a bit crazy. First, they want to take away our juicy steaks because cows fart… Three years ago, they crossed the line of decency with the suggestion of reversing climate change by eating people. The original suggestion was made by a  Swedish scientist who said it may be necessary to turn to cannibalism and start eating human flesh to save the planet (giving new meaning to the expression bite me).  Now the NY Times is explaining that cannibalism is becoming acceptable in modern American culture.

A 2017 conference about the food of the future called Gastro Summit held in Stockholm, Sweden, featured a presentation by Swedish Magnus Söderlund’ claiming that we must get used to the idea of eating human flesh in the future as a way of combating the effects of climate change. Söderlund’ did say we should eat bugs and see if that works first.

As they said in the old country, “Ewww!”

On July 23rd, the NY Times ran an article discussing the rise of cannibalism in popular American culture called A Taste for Cannibalism? The article covered the claim, “A spate of recent stomach-churning books, TV shows, and films suggests we’ve never looked so delicious — to one another.” Did the Times publish that article to protect Biden? Eating your neighbor is now popular, so you don’t have to worry about the supply chain crises or Bidenflation.

The Times started out by giving examples of the many books, movies, and TV shows using people eating as part of their plot lines. Not one of those examples of modern culture uses Sheb Wooley’s classic “purple people eater.” Nor did the NY Times story mention the Broadway musical hit from 1979 about cannibalism called Sweeney Todd: The Demon Barber of Fleet Street.

The “Old Grey Lady” listed the yummy people media and asked the question, “Can you stomach it?” In a rare move, the NY Times didn’t find a way to blame the trend on conservatives.

The pilot episode of “Yellowjackets” shows a teenage girl getting trapped, bled out like a deer and served on a platter in a terrifying ritual. Bloodthirsty fans continue to dissect the scene on Reddit, where a subreddit message board dedicated to the series has more than 51,000 members.

The show’s tension is in the knowledge that you know cannibalism is coming, but when? And why?

The creators of “Yellowjackets,” Ashley Lyle and Bart Nickerson, who live in Los Angeles, say they wanted the plot to hint that human consumption wasn’t merely for the characters’ survival. This not only adds a spine-tingling creepiness to the already dark story about the soccer team stranded in the wilderness, but also separates it from the real-life tale of a Uruguayan rugby team trapped in the Andes in 1972, whose members resorted to cannibalism to survive. (That event was later dramatized in a 1993 movie, “Alive,” starring Ethan Hawke.)

Alive was very different. The true story resorted to cannibalism because they were stranded and starving. It seems the cannibalism in the books, movies, and TV shows mentioned in the NY Times would appear on the menus of fine restaurants just above chateaubriand.

A course on cannibalism in contemporary fiction would include “Lapvona,” “A Certain Hunger,” and “Tender Is the Flesh.”

“Lapvona,” by Ms. Moshfegh, is also not overtly cannibalistic; unlike “A Certain Hunger,” there’s no braising with bouquet garni. But one scene involving a toenail is harrowing.

Known for her unsettling, delving-into-the-darkness stories including “Eileen” and “My Year of Rest and Relaxation,”Ms. Moshfegh, 41, who lives in Los Angeles, wrote “Lapvona” during the spring of 2020, in the early days of the pandemic. “I wrote it in such complete isolation that I felt this incredible freedom to go wherever I was being led,” she said.

The character who eats another human, the greatest sin in his religiously vegetarian village, does so in an act of “depraved desperation,” said Ms. Moshfegh, a vegetarian herself.

If that ever happens, I promise to stop making fun of vegetarians (vegans are still fair game).

So far, when cannibalism is threatened in real life, it is not as accepted as it seems in modern culture. As explained in Vulture:

“Recent accusations of sexual and physical abuse against the actor Armie Hammer,  have included that he allegedly sent cannibalistic messages to a romantic partner. Mr. Hammer has denied the accusations and, through his lawyer, declined to comment for this article.

The accusations started with these tweets from an ex-girlfriend:

these are not in order i am just posting what i have saved. same trigger warnings apply. if you are a victim of his i encourage you to DM @/ houseofeffie on instagram. my dms are also open if you just need to talk. stay safe. pic.twitter.com/mjikF4pN0t

Other exes took a bite out of Hammers’s career. But at this point, there have been claims but no proof or arrests.

Some of the authors of this concept admit that their own stories eat away at their stomachs:

Ms. Moshfegh said her theory was “that it might be an antidote to the actual horror of what’s happening to the planet.” Like Ms. Moshfegh, at times couldn’t stomach her own work, describing the process of writing about cannibalism in “Lapvona” as “a bit disturbing.”

“I had to think about what part of the body would be an interesting place to start,” she said, “and how it would feel to hold someone’s severed hand in yours.”

Personally, I would start with sorbet and a glass of wine or a box of Oreos. The question is if cannibalism becomes accepted in popular culture, does it start becoming accepted in real life? We have a Swedish scientist saying it  And an author saying, “t might be an antidote to the actual horror of what’s happening to the planet.”

There is a history of humans eating other humans:

Bill Schutt, the author of “Cannibalism: A Perfectly Natural History,” says that fictional plots about eating human flesh are as old as literature itself.

(…) Historical examples in the book include “mumia,” a practice of using ground-up mummified bones to soothe various ailments that was popular in 17th-century Western Europe; the infamous Donner Party pioneers who became trapped in the Sierra Nevada in 1846; ritual cannibalism that took place in Papua New Guinea until the 1950s; and famine-induced cannibalism in China in the 1960s.

Mr. Schutt’s book also features the story of the so-called Cannibal Cop, a former New York Police Department officer who was arrested in 2013 for participating in fetish forums that fantasized about cannibalizing women, and later acquitted. The New York Post has published more than 30 articles about the case, including one suggesting the Halloween costume of a policeman’s uniform with a severed hand on a plate.

When the kid said “trick or treat,” I supposed the answer was “treat.”

Is the rise l of cannibalism in today’s culture change the unthinkable into the acceptable? I am not a sociologist, nor have I ever played one on TV, so I cannot give an answer based on probability. All I can say is I pray that it doesn’t. I also pray that the government doesn’t try to stop the books, movies, etc. Losing the freedom of speech will prevent Americans from spreading the news and fighting back against any potential cannibalism.

Thankfully I won’t have to participate in the eating people part. I keep Kosher, and we are not supposed to eat animals that don’t have split hooves and chew their cud, Humans fail in both categories, so I won’t be eating human flesh.