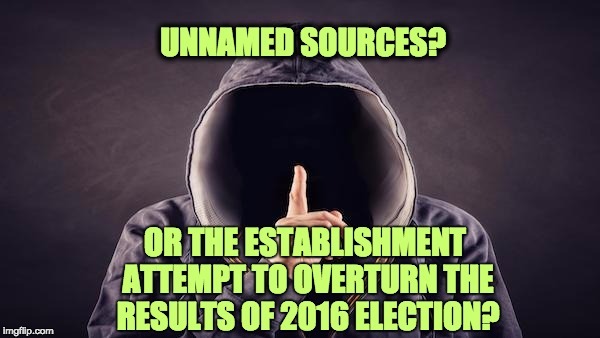 I am reluctant to report this because–well–how many people will believe a scandalous story whose only source is “unnamed sources,” but for the future of this great land I feel I must go with it.

Twenty-nine different unnamed sources, plus one that had a name but forgot it, ten of whom are close to the NY Times management (they live in Manhattan), ten close to Washington Post management, and ten play in the Atlanta Corporate softball league with CNN management,  shared some scandalous information today.

All thirty of my unnamed sources report that the NY Times, Washington Post, and CNN unnamed sources are drug addicts who don’t smoke crack, they smoke belly button lint. Not one of them has made a truthful statement since they started smoking lint.

The Washington ten revealed that the Mother’s of the Post’s unnamed sources are sluts who will do or say anything to satisfy their lovers in the liberal wing of the Democratic Party.

Nine unnamed sources who live in the Hell’s Kitchen neighborhood of Manhattan, plus one who lives in the Chelsea neighborhood (or maybe he said he was friends with Chelsea Clinton), revealed some secrets about the unnamed sources used by the New York Times, apparently all of them have fat bald cowardly fathers who have tiny hands and aren’t really their biological dads cause their moms wouldn’t touch them with a ten-foot-pole.

As for the CNN sources…well its really sad, these are people who are all named Ralph, because they are so ugly if anyone looks at them all they do is “call Ralph.”

I just received a call from an unnamed source who is a very distant relative of James Comey. He read me a letter from Comey that said in part , if Trump ever really said those things that the NY Times said he wrote about, the ex-FBI director would have screamed it out in public. Comey gave him the letter and said the real reason he leaked that NYT letter is…well…let’s just say payback’s a b**ch.

If any of the media wants me to provide proof of my unnamed sources…or even to provide their names to prove what I quoted above is true, I would be happy to do that.  But first, they need to provide THEIR unnamed sources…have them come out and verify the charges they make about President Trump.

Some have asked if this post is a satire.  It very well may be–or it can be just as truthful as the MSM stories using anonymous sources.  Perhaps it’s both.