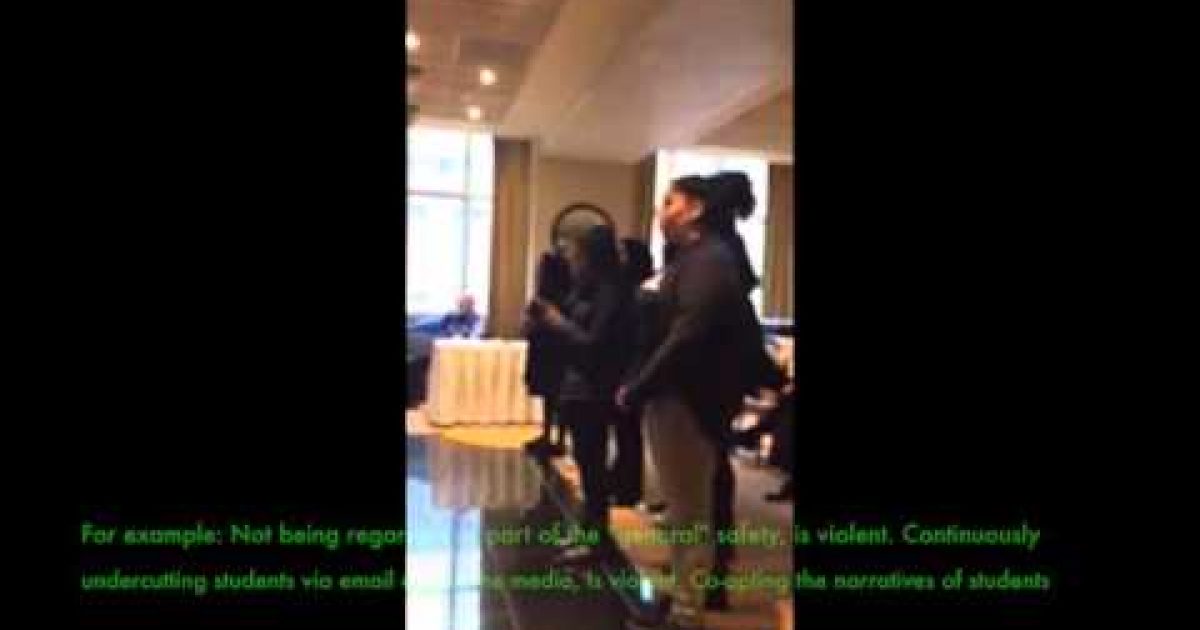 Student activists at Western Washington University, a public university in Bellingham, Washington, have presented a list of demands that go much further than those of students at other universities in the rash of student protests during the 2015/16 school year. The activist group called the “Student Assembly for Power and Liberation” presented a list of demands to help the campus’ oppressed persxns (the “x” is not a typo that’s how they spell it on their document). Their demands include the creation of an entirely new school as well as hiring/firing power, and a student committee to discipline the “oppressive behavior” of faculty and staff.

Seen in the picture above, the Student Assembly for Power and Liberation began its quest by barging into a February 12th Board of Trustees meeting (see video below). When they didn’t get a response, they published a petition detailing a list of demands which included the creation of an entirely new school called, “The College of Power and Liberation” which will create “academic programs that are committed to social justice.” The college will serve all students by bringing the study of histories and communities that continue to be mis- and underrepresented into the mainstream curriculum at Western.”

Of course the students want the power to hire and fire faculty in that school and demand that WWU build an entirely new staffed “interdisciplinary library.”

And when the college is all ready, they demand that school to spend at least $50,000 on an opening event that will mark “the beginning of the momentous history of the College of Power and Liberation” and introduce its mission to students.

While they’re at it, the students want the school to create a student emergency fund to help retain those excellent students from underrepresented communities who are unable to remain at Western due to financial hardship, and work study positions for at least 20% of the students enrolled in the college. They do not explain how any of these new programs will be financed.

They demand “the creation and implementation of a 15 persxn paid student panel to monitor documents and archive all monitor, document, and archive all racist, anti- black, transphobic, cissexist, misogynistic, ablest, homophobic, islamophobic, xenophobic, anti-semitism, and otherwise oppressive behavior on campus.”

Oh, and their list of the people they be able to judge includes the campus police – so, any student who is arrested, disciplined and/or gets looked at by the police can bring that cop up on charges. There will be a three-strike policy for anybody who engages in “oppressive behaviors,” which are not defined – but, must include the offense of using the word “person” without the “x.”

Thankfully university president  Bruce Shepard told the Student Assembly for Power and Liberation “No,” albeit much too nicely. As reported by the  Bellingham Herald:

In response, WWU President Bruce Shepard sent the Associated Students a letter March 1 saying many of the demands needed to go through established university procedures from the bottom up, not top down. Adding a college and curriculum needs to start with committees of the Faculty Senate, he wrote. He also pointed out that the ideas lacked ways to fund them and that some would violate union contracts, university policies and federal law.​

Finally, the manifesto fails to explain how – while they are planning and running this new college and hiring and firing faculty, Campus Police and other staff – students will they have the time to do what they were sent to the school for in the first place: take classes and learn something.