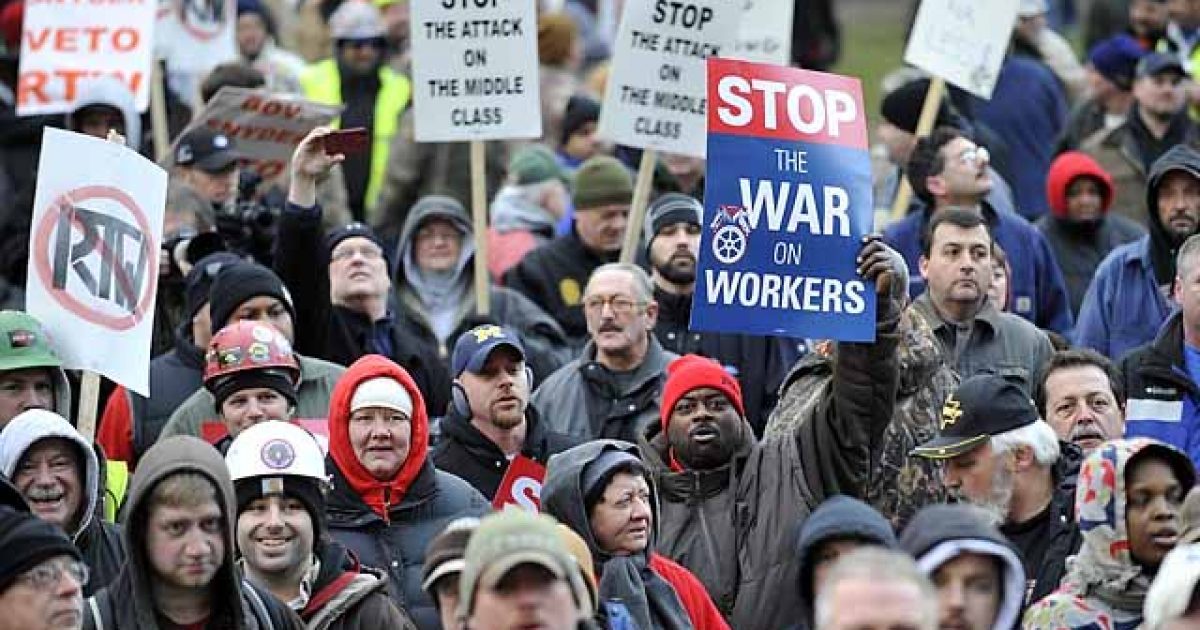 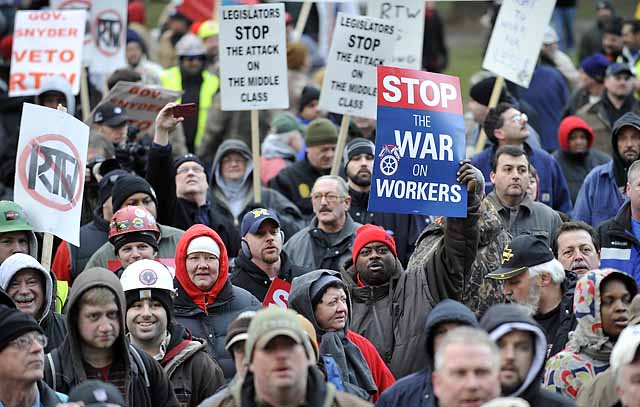 The Unions have been massing in Lansing, the Capital of Michigan all day to demonstrate their objection to a new law giving people the freedom to decide for themselves whether they pay union dues or not. At issue is Michigan becoming the country’s 24th right to work state.

The Union leaders understand that many people will not join their organizations if not forced to by law.

“We are union!” could be heard throughout the Capitol building as union members turned out early, dead set on protesting the controversial legislation, which is expected to pass through the Legislature later Tuesday, heading to a pen-ready Gov. Rick Snyder.

Outside, two tents were torn down by protesting union members who have gotten more rowdy as the day goes on.

Multiple men grabbed a hold of sticks supporting the structures and unearthed them, sending them toppling to the ground. The second tent had people inside and a fight broke out after it came down.

One volunteer marshal got into the skirmish, trying to hold union members back, and another altercation broke out between a man and a woman.

Inside by late morning, confusion began to set in among the more than 2,400 protesters inside the Capitol as demonstrators used the human microphone technique, popularized during the Occupy Wall Street movement, to try to communicate the status of the bills being considered by legislators.

After several minutes of chanting, a woman wearing short pig tails in her hair walked onto the rotunda floor and incorrectly announced that the public sector section of legislation was approved.

“Shame!” and “kill the bill” chants began to fill the rotunda.

Shame? I wonder what happened to freedom of choice?  I thought the constitution guaranteed  that we could assemble (or not assemble) with whomever we chose to—well not according to the unions.

Michigan State Police said the public were allowed to enter the Capitol from the east side as authorities stepped up restrictions on entrance into the building to avoid situations similar to Thursday when tempers flared and eight protesters were pepper-sprayed after trying to rush past troopers into an unauthorized entrance of the Capitol, Capt. Herold Love said Tuesday.

Lansing police are estimating the protests could attract up to 30,000 union members from across the Midwest and right-to-work advocates mobilized by the state Republican Party.

“Our game plan is to allow everyone to express their constitutional rights safely and orderly,” said Adamczyk, whose agency was criticized for blocking entrance to the Capitol on Thursday during the first day of union protests against the right-to-work bills.

Not all the protesters were against the bill:

Don Peterson, 73, of Williamston, was also among a handful of people who started the line to get into the Capitol just after 5 a.m.

The retired writer says right-to-work is “morally right” to allow workers to decide whether to financially support labor unions that negotiate contracts in the workplace.

“Why should a person be a slave to unions because he or she wants to work,” Peterson asked. “People should have the right to work without having to pay union dues.”

Understand this legislation has nothing to do with busting unions and everything to do with free choice. The bill will be passed today and it will be a great moment for freedom in Michigan.

In the video below we see the union members attack Steven Crowder: