Get Ready For “Peace Talks” –>UN Resolution 242 For Dummies 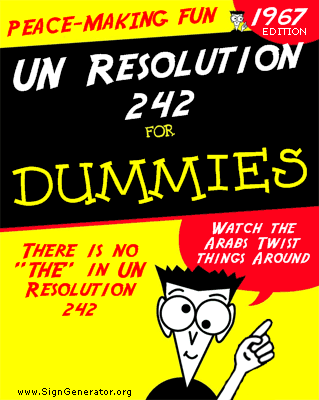 Since we are about to embark on another fruitless peace effort in the Middle East, it probably makes sense to take another look at the UN Resolution we will be hearing a lot about over the next few months, UN Resolution 242.

You will hear politicians and diplomats claim that Israel must withdraw to the pre-1967 borders per UN Resolution 242. These people have no Idea what the resolution calls for, which is

“..withdrawal of Israel armed forces from territories occupied in the recent conflict;”

It all surrounds the use (or non-use) of one simple article “the.”

It was no accident “the” was left out. Diplomats are very exact in their language. During the negotiations to create resolution 242, Arab governments tried three times to have “the” inserted in the resolution and their request was rejected. But, by repeating what they wanted the resolution to say all these years, the Arabs succeed in convincing many people to accept their distorted interpretation of 242.

But, if you read the statements of the drafters of the resolution there is no ambiguity about what they meant. Below are those statements by country and participant:

Lord Caradon, interviewed on Kol Israel in February 1973:
Question: “This matter of the (definite) article which is there in French and is missing in English, is that really significant?”
Answer: “The purposes are perfectly clear; the principle is stated in the preamble, the necessity for withdrawal is stated in the operative section. And then the essential phrase which is not sufficiently recognized is that withdrawal should take place to secure and recognized boundaries, and these words were very carefully chosen: they have to be secure and they have to be recognized. They will not be secure unless they are recognized. And that is why one has to work for agreement. This is essential. I would defend absolutely what we did. It was not for us to lay down exactly where the border should be. I know the 1967 border very well. It is not a satisfactory border, it is where troops had to stop in 1947, just where they happened to be that night, that is not a permanent boundary… “

Mr. Michael Stewart, Secretary of State for Foreign and Commonwealth Affairs, in reply to a question in Parliament, 17 November 1969:
Question: “What is the British interpretation of the wording of the 1967 Resolution? Does the Right Honourable Gentleman understand it to mean that the Israelis should withdraw from all territories taken in the late war?”
Mr. Stewart: “No, Sir. That is not the phrase used in the Resolution. The Resolution speaks of secure and recognized boundaries. These words must be read concurrently with the statement on withdrawal.”

Mr. Michael Stewart, Secretary of State for Foreign and Commonwealth Affairs, in a reply to a question in Parliament, 9 December 1969:
“As I have explained before, there is reference, in the vital United Nations Security Council Resolution, both to withdrawal from territories and to secure and recognized boundaries. As I have told the House previously, we believe that these two things should be read concurrently and that the omission of the word ‘all’ before the word ‘territories’ is deliberate.”

Mr. George Brown, British Foreign Secretary in 1967, on 19 January 1970:
“I have been asked over and over again to clarify, modify or improve the wording, but I do not intend to do that. The phrasing of the Resolution was very carefully worked out, and it was a difficult and complicated exercise to get it accepted by the UN Security Council. “I formulated the Security Council Resolution. Before we submitted it to the Council, we showed it to Arab leaders. The proposal said ‘Israel will withdraw from territories that were occupied’, and not from ‘the’ territories, which means that Israel will not withdraw from all the territories.” (The Jerusalem Post, 23.1.70)

Mr. Joseph Sisco, Assistant Secretary of State, 12 July 1970 (NBC “Meet the Press”):
“That Resolution did not say ‘withdrawal to the pre-June 5 lines’. The Resolution said that the parties must negotiate to achieve agreement on the so-called final secure and recognized borders. In other words, the question of the final borders is a matter of negotiations between the parties.”

“The agreement required by paragraph 3. of the Resolution, the Security Council said, should establish ‘secure and recognized boundaries’ between Israel and its neighbors ‘free from threats or acts of force’, to replace the Armistice Demarcation lines established in 1949, and the cease-fire lines of June 1967. The Israeli armed forces should withdraw to such lines as part of a comprehensive agreement, settling all the issues mentioned in the Resolution, and in a condition of peace.” (American Journal of International Law, Volume 64, September 1970, p. 68)

USSR
Mr. Vasily Kuznetsov said in the debate that preceded the adoption of Resolution 242:
“… Phrases such as ‘secure and recognized boundaries’. What does that mean? What boundaries are these? Secure, recognized – by whom, for what? Who is going to judge how secure they are? Who must recognize them? … There is certainly much leeway for different interpretations which retain for Israel the right to establish new boundaries and to withdraw its troops only as far as the lines which it judges convenient.” (S/PV. 1373, p. 112, of 9.11.67)


Brazil
Mr. Geraldo de Carvalho Silos, Brazilian representative, speaking in the Security Council after the adoption of Resolution 242:
“We keep constantly in mind that a just and lasting peace in the Middle East has necessarily to be based on secure, permanent boundaries freely agreed upon and negotiated by the neighboring States.” (S/PV. 1382, p. 66,22.11.67 )

Source for the Above Statements
From now on when you hear a diplomat, politician, terrorist or newsman say that 242 calls for Israel to withdraw from the territories please send them a copy of this article with a note telling them the bias is pouring out of their mouths.

NASCAR vs NBA: What The Differences About Their Two Anthems Tell Us About America
February 17th, 2020 Clash Daily

More Americans Now Identify as Republicans Than They Do As Democrats
February 16th, 2020 Big League Politics

Unearthed Clip Shows Bloomberg Mocking Farmers, Says He ‘Can Teach Anyone’ How to Do It
February 16th, 2020 Flag And Cross
Thanks for sharing!
We invite you to become a Lid insider. Sign up for our free email newsletter, and we'll make sure to keep you in the loop.