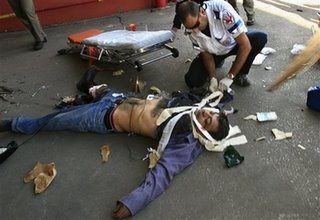 Today In Sderot Palestinian rockets fell right near the car of , United Nations High Commissioner for Human Rights Louise Arbour. One of the rockets hit a factory in town severely injuring one of the workers and starting a fire
Arbor gave the typical UN Response:

For those of you who don’t understand UN double-speak I will translate for you, she said: it is OK for Palestinians to bomb Israel, but retaliation is not OK, Especially if Hamas breaks international law by using human shields. It is UN policy that only Israelis are allowed to die.
Arbor went on to say:

The position of the High Commissioner is that Qassam rockets are illegal under international law. The reason is that they are not accurate and [those firing them] cannot make a distinction between combatants and non-combatants,”

OMG, is the commissioner HIGH? She just said it is ok to fire Qassams into Israel, but guys, try to aim for military targets. Since when is it ok to fire missiles into another country for ANY reason? These attacks were not provoked; they have been going on ever since Israel pulled out of Gaza.

Early this morning I received a comment from a highly placed source within the Prime Minister’s Office, apparently Omert is very angry with the High, High Commissioner. He feels it shows a total lack of understanding of what is going on. [DUH!!] Of course the tower of Jell-O will not react in public; he refuses to make a statement vilifying the commissioner’s double standard. Hey Echud….let it out! It is not healthy to keep things in. If you spoke out people might even believe that you have leadership potential. Unlike the feeble PM, the residents of Sderot, showed some backbone. They tried to show displeasure at the UN double standard. According to Reuters:

Several workers in the industrial zone where the rocket landed tried to storm Arbour’s car and one woman threw a clump of dirt and pebbles at the vehicle. Police pushed them back.
“No one wants to help us. We have no government,” one of the protesters shouted.

No word yet on whether France is going to introduce a UN resolution condemning Israel for allowing one of its citizens to bleed near the High Commissioner’s Car.

I was only joking when I wrote the above but then I read this clip from Israpundit: France DID find a way to complain:

This article that came fluttering over the French news agency AFP today is tbe best example I could find recently of the egregious bias that afflicts media coverage of Israel.
Continue reading this article

Note the title: “Israeli protestors throw stones at UN commissioner’s convoy.” Imagine the suffering! Poor, poor, UN officials being bombarded with stones, blood splattering, injured people filling the hospital.
Actually, if you look closely, you find that somebody maybe threw something at a car, and nobody was hurt. Even a UN spokesman downplayed the incident as it was, which was a big fat nothing.
Meanwhile, three Italian aid workers are kidnapped and that gets the same amount of coverage from the AFP.