“There is no purgatory for war criminals…” 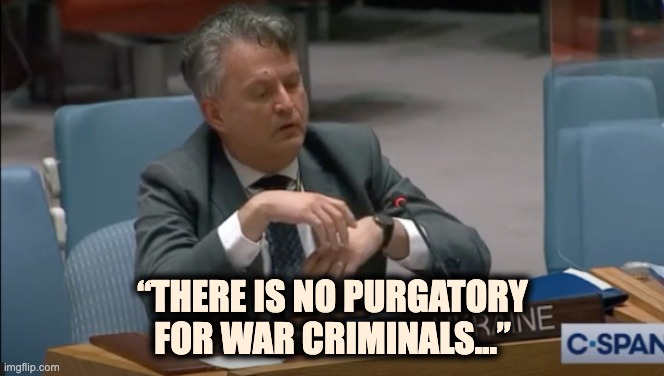 With Russia’s unconscionable invasion of the sovereign nation of Ukraine today, the world was shaken. We had all seen it coming to some degree. Putin certainly wasn’t trying very well to hide his intentions.

But, for many of us, we were never really sure that it would come so swiftly and succinctly. Throughout time, Putin and the Kremlin have both preferred to work dirty diplomacy in the grey areas of the international modicum. It’s often a bit baldfaced, sure, but nothing like what we’re seeing in Ukraine today. Tanks. Missiles. Bombs. Friggin’ paratroopers like they’re trying to make a shoutout directly to World War II itself.

For many, there was anger. And angst. And an outright damning of the entire situation.

An 11th-hour United Nations meeting seeking to stem potential fighting between Ukraine and Russia produced a rare, spontaneous exchange between the countries’ representatives.

During the meeting, Ukrainian Ambassador Sergiy Kyslytsya told the council that his country wants peace but warned they were on the precipice of war and called on the council to stop Russian aggression.

“It’s too late, my dear colleagues, to speak about de-escalation,” Kyslytsya said, as Russian forces piled near the border of the two countries. “I call on every one of you to do everything possible to stop the war.”

Then came the fireworks.

Later in the meeting, Kyslytsya called on Nebenzia to relinquish his duties as the chairman of the meeting while thanking other members for condemning the aggression.

“There is no purgatory for war criminals. They go straight to hell, Ambassador,” the Ukrainian said.

During a Thursday afternoon speech, Joe Biden pledged U.S. support to Ukraine and Ukraine. He also issued new sanctions mostly against Russian oligarchs and banks, nothing to hit Putin personally yet, but might in the future. Biden was correct when he said sanctions’ effect on the Russian people will take a long time—but that is frustrating. Putin has been talking about Wednesday’s action since last July. Why did Biden wait so long? His cutback of U.S. fossil fuel production, raised prices, giving Russia higher profits that it used to fund their Ukraine action. Why didn’t he go back to previous production levels seven months ago? He told America that we would have to feel pain, but that pain would worsen thanks to his energy policy.