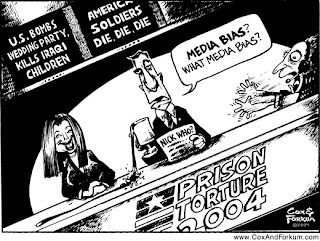 I wonder if David Frost and Dave Marash are the least bit embarrassed, probably not–I certainly would be. These two legends of TV news have cast a shadow upon their once storied careers. Each of them are each working for Al-Jazeera English associating with a network that sells a terrorist agenda. This time it is not a Jewish organization calling Al-Jazeeras reporting biased toward terror nor is it even an American group. Al-Sharq Al-Awsat, an Arabic Daily in London has scolded Al-Jazeera for it’s one sided views. Al-Jazeera has taken a positive stance toward Fath Al-Islam, the terrorist group fighting the Lebanese Army in northern Lebanon. Egyptian Columnist Diana Muqallid, takes the network to task:

“Yet again, Al-Jazeera has not hesitated to play the role it played in Afghanistan, Iraq, and Palestine – that of official spokesman and activist for fundamentalist groups. It seems obvious that the Fath Al-Islam fighters were dealing with a ‘friendly’ camera, not with a journalistic camera”

Al-Jazeera Criticized for Once Again Acting as ‘Official Spokesman for Fundamentalist Groups… As It Did in Afghanistan, Iraq and Palestine’

In a recent column titled “Al-Jazeera to The Rescue of Fath Al-Islam,” in the London daily Al-Sharq Al-Awsat, Egyptian columnist Diana Muqallid harshly criticized the Al-Jazeera network’s coverage of the clashes between the Lebanese army and Fath Al-Islam for its lack of objectivity, and for its disregard of the latter’s aggressive actions. She wrote that Al-Jazeera was playing the same role it had played in Afghanistan, Iraq, and Palestine – that of spokesman for fundamentalist groups.

An example of Al-Jazeera’s bias towards Fath Al-Islam is an article by senior Al-Jazeera presenter Dr. Faisal Al-Qassem, that was published in the London daily Al-Quds Al-Arabi – a paper known to support Saddam Hussein and Osama bin Laden. In it, he attacked the way the Lebanese army was waging the clashes, and the harm it was doing to the residents of the refugee camps where the clashes were taking place, while disregarding the part that Fath Al-Islam was playing in the violence.

The following are excerpts from both articles.

Columnist Diana Muqallid wrote: “On the fourth day of the battles around the Nahr Al-Bared refugee camp in northern Lebanon, the Al-Jazeera network opened its evening news with a preface, in which the announcer said that the story that was about to be broadcast included exclusive photos from inside the Palestinian refugee camp showing the scope of the killing and the extent of the ‘human suffering’ of the camp residents.

“The footage that followed showed Fath Al-Islam fighters in their positions, firing at targets that clearly belonged to the Lebanese army. The footage showed not one sight reflecting the suffering of the Palestinian residents; the focus was on the armed fighters, who repeated over and over… statements such as ‘satanic tyrants’ and ‘infidels,’ as they exchanged information on the positions of their fighting ‘brothers.’

“Yet again, Al-Jazeera has not hesitated to play the role it played in Afghanistan, Iraq, and Palestine – that of official spokesman and activist for fundamentalist groups. It seems obvious that the Fath Al-Islam fighters were dealing with a ‘friendly’ camera, not with a journalistic camera. [This friendly coverage of Fath Al-Islam] quickly created a connection between [Fath Al-Islam] – which accuses [others] of heresy and regularly carries out massacres and indiscriminate killing, and whose members blow themselves up – and the [Al-Jazeera] channel, which from its outset has ignited Islamic populism and whose influence is growing…

“[Al-Jazeera] did not mention the fact that [this] group had slaughtered [Lebanese] soldiers in their sleep. [But] the most important point is that the [special] news flashes and news headlines about the ongoing shelling [of the refugee camp] by the [Lebanese] army never referred to the ongoing entrenchment of the Fath Al-Islam fighters among the residents, and to their shelling of aid and rescue convoys.

“Concealing or ignoring the suffering of the Palestinian residents would be a black stain on any [political] body or media outlet, whether it be Lebanese or Arab. But extolling the Fath Al-Islam murderers, and making efforts to associate them with civilians, is first and foremost a crime against the Palestinian residents [of the camp], even more than it is a crime against Lebanon…”(1)

In an article in the pro-Saddam and pro-bin Laden London daily Al-Quds Al-Arabi, Dr. Faisal Al-Qassem, well-known presenter of the Al-Jazeera talk show The Opposite Direction, harshly criticized the operations of the Lebanese army in the Nahr Al-Bared camp, accusing it of aggression against the helpless refugees:

“Oh Allah, how strong are our Arab armies, and how brave they are, against anyone who raises his hand or his voice against them in the country!… I have seen the ‘heroism’ of the ‘great’ Lebanese army against the children, the women, the elderly, and the wretched in the Nahr Al-Bared camp in northern Lebanon.

“I never imagined that Lebanon [even] had tanks, armored vehicles and a military until it [i.e. the Lebanese army] showed us its ‘heroism’ against the unarmed Palestinians in Lebanon. I am ashamed to say that I thought that Lebanon’s armed forces were [merely] a name that does not stand for anything concrete – as proved by the fact that they have not intervened in any significant armed conflict with Israel, despite Israel’s daily attacks [on Lebanon] since the 1970s. [This is what] caused Israel to demand from the U.N., more than once, that the submissive Lebanese army be posted along the border with the Hebrew state – instead of the men of the strong Lebanese resistance [i.e. Hizbullah] who gave the [residents of] Tel Aviv no respite, day or night…

“We never heard any mention of the Lebanese regime’s armed forces in the recent war [in July 2006]… All we saw were the destroyed Lebanese vehicles, wounded soldiers, and [other] sorrowful sights among the regime’s forces. But we never saw the smoke emerging from their cannon and their missile launchers, [and we never saw them] in the skies [fighting] against the Israeli airplanes – as they are now deployed in the skies over Nahr Al-Bared during the ‘victorious’ attack on the residents of that wretched camp…

“The Lebanese army justifies its ‘heroism’ against the unarmed in the Nahr Al-Bared camp by [saying that] it wants to preserve its prestige and honor as a national army – particularly after being accused, more than once, of not being an army at all. But the question is whether it should act in this way – killing, terrorizing, and expelling thousands of innocent [people], and turning a region crammed with wretched refugees into the scene of a war of destruction…?”(2)