The U.N.’s Antisemitism Is Showing Again 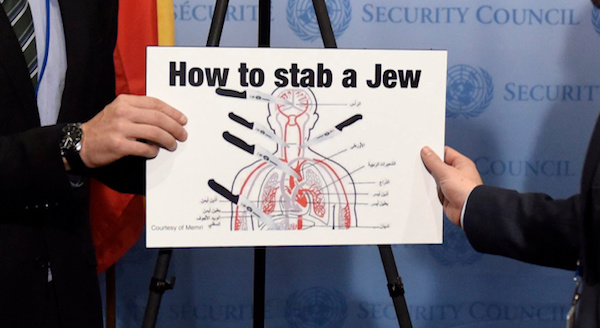 On Friday, the U.N. organization, UNESCO (United Nations Educational, Scientific and Cultural Organization) doubled-down its hatred of the Israel and the Jewish people by denying their biblical connection to the old City of Hebron. Hebron is home the Tomb of the Patriarchs, purchased nearly four millennia ago by Abraham, as a burial place for his wife Sarah. Twelve countries voted in favor of the Palestinian request to name Hebron a Palestinian heritage site, while only three voted against it. Six countries abstained.

This resolution, like last year’s UNESCO action regarding Jerusalem and the Temple Mount has only one purpose to delegitimize Israel by denying the Jewish connection to the Holy Land. At its heart, this resolution is not simply directed at Israel, but at all Jews everywhere. Next to Jerusalem, Hebron is the holiest city in the Jewish faith.

Israel will reject Friday’s anti-Semitic resolution, as they did the one last year which named the Temple Mount a Palestinian heritage site. Already the Jerusalem Post reports:

Israel’s Deputy Foreign Minister Tzipi Hotovely described the vote as a “badge of shame for UNESCO, which time after time prefers to stand with the side of lies.”

Israel’s Defense Minister Avigdor Liberman reacted to the vote by describing UNESCO as a “politically-biased, embarrassing and anti-Semitic organization.”

Education Minister Naftali Bennett also criticized the vote. “It is disappointing and disgraceful that, time and again, UNESCO denies history and distorts reality, knowingly serving those attempting to erase the Jewish state,” said Bennett. “Israel will not resume its cooperation with UNESCO so long as it remains a political tool, rather than professional organization.”

Chairperson of Israeli party Yesh Atid Yair Lapid also responded, saying, “UNESCO’s decision to recognize the Cave of Patriarchs as a Palestinian heritage site is a despicable falsification of history. Does UNESCO not believe that the Bible is heritage? It’s a decision that, at best, stems from utter ignorance and, at worst, from hypocrisy and antisemitism.”

Christians across the world should realize the UNESCO resolution not only rejects Jewish heritage, but the heritage of everyone who believes in what they call the “Old Testament.” As described in B’reisheet chapter 23, before Abraham purchased the land that became the Cave of the Patriarchs, he rejected the Hittites’ offer to receive the land as a gift. Eventually he overpaid for the land so there would never be a doubt or a complaint that it is Jewish-owned territory. Eventually Abraham, his son Isaac and his wife Rebekah, Jacob and one of his wives Leah, and Esau’s head (long story) were also buried in the cave.

Hebron’s been a Jewish city since biblical times for the past 38 centuries (with a break from 1929-1967). The Jews had owned that cave and land in the city land until they were massacred and force out by Arab terrorists in 1929.  For most of that time, the majority of the population most of that time were Jews. From that 1929 massacre until the Six-Day-War in 1967, Hebron was a Jewish city occupied by the Arabs.

Hebron’s Arab occupation began on a Friday evening in August 88 years ago when a group of Arab terrorists massacred the Jews of the city while the British (who ruled over the Holy Land) knew what was happening but didn’t lift a finger to prevent the carnage.

Sensing that earlier riots were moving to Hebron, on that Friday night, the son of Sephardic Rabbi Ya’acov Slonim’s s invited any fearful Jews to stay in the Rabbi’s house. The Rabbi was highly regarded in the community, and he had a gun. Many Jews took him up on this offer, and most of those Jews were murdered in his home

On Saturday morning, before the slaughter began, all of Hebron’s Rabbis appealed to the British Governor for protection. They received assurances of safety. They also turned to the British officer in charge of the Police who made the same assurances.’

As early as 8:00 a.m. on Shabbat Arabs began to gather en masse. They came in mobs, armed with clubs, knives and axes. While their wives and children threw stones, Arab men ransacked Jewish houses and destroyed Jewish property. With only a single police officer in Hebron and the promised help absent, the Arabs entered Jewish courtyards with no opposition.

Rabbi Slonim, who was sheltering Jews in his home was approached by the rioters and offered a deal. If all the Ashkenazi yeshiva students were given over to the Arabs, the rioters would spare the lives of the Sephardi community. Rabbi Slonim refused to turn over the students and was killed on the spot.

“On hearing screams in a room I went up a sort of tunnel passage and saw an Arab in the act of cutting off a child’s head with a sword. He had already hit him and was having another cut, but on seeing me he tried to aim the stroke at me, but missed; he was practically on the muzzle of my rifle. I shot him low in the groin. Behind him was a Jewish woman smothered in blood with a man I recognized as a[n Arab] police constable named Issa Sherif from Jaffa in mufti. He was standing over the woman with a dagger in his hand. He saw me and bolted into a room close by and tried to shut me out-shouting in Arabic, ‘Your Honor, I am a policeman.’ … I got into the room and shot him.” (Bernard Wasserstein, The British in Palestine: The Mandatory Government and the Arab-Jewish Conflict 1917-1929, Oxford England, Basil Blackwell, 1991)

“Now let me tell you about the massacre. Right after eight o’clock in the morning we heard screams. Arabs had begun breaking into Jewish homes. The screams pierced the heart of the heavens. We didn’t know what to do. Our house had two floors. We were downstairs and a doctor lived on the second floor. We figured that we would be safe in the doctor’s apartment, but how could we get up there? The stairs were on the outside of the building, but it wasn’t safe to go out. So we chopped through the ceiling and that way we climbed up to the doctor’s house. Well, after being there only a little while, we realized that we were still in danger because by that time the Arabs had almost reached our house. They were going from door to door, slaughtering everyone who was inside. The screams and the moans were terrible. People were crying Help! Help! But what could we do? There were thirty‑three of us. Soon, soon, all of us would be lost.” (Letter From a Survivor of the Hebron massacre).

When the massacre finally ended, the surviving Jews resettled in Jerusalem. Some Jewish families tried to move back to Hebron, but were removed by the British authorities in 1936 at the start of the Arab revolt. In 1948, the War of Independence granted Israel statehood, but further cut the Jews off from Hebron, as the city was captured and officially occupied by King Abdullah’s Arab Legion and ultimately annexed to Jordan.

Why did the local Arabs slaughter sixty-five slaughtered, and wound fifty-eight wounded, there was no Jewish State of Israel to hate back then, only Jews….so what is their excuse? Why does the U.N. refuse to recognize the 38 centuries of Jewish heritage in Hebron? For the same reason as the 1929 slaughter…the victims are only Jews.

The Memorial of the Jews of Hebron, as submitted to the High Commissioner of Palestine includes these accusations:

“The [British Mandatory] Government, which did not fulfill its duty and provide protection for its peaceful and defenseless charges.

The Governor, Abdullah Kardos, and the Commander, Cafferata, who deprived us of the means of appealing for help and defense, betrayed us with empty promises and gave the murderers and robbers their opportunity.

The police, which did not fulfill its duty, and behaved with contemptible baseness.”

On that Sabbath in 1929 the very first Jewish city became occupied territory. And the Jews of Israel and worldwide learned that they cannot rely on anyone else for protection. A lesson that was reinforced during the Holocaust by FDR and Churchill.

Now some 88 years later that memorial still rings true. TheU.N., which was formed in the wake of WWII and the attempted Nazi genocide of the Jews, now commits Antisemitism in its own name. Friday’s Hebron vote was just another example.  Their anti-Israel resolution is simply Antisemitism dressed in nicer clothing.

In recent years there have been Jewish stabbing victims, and other Jews crushed by cars and trucks, left bleeding in the streets of Israel courtesy of Palestinian terrorists and just like 1929 Hebron, just like murder of six million Jews in Nazi Germany, the world watches and does nothing. Even today when terrorists are captured and put in jail, the supposedly moderate Palestinian Authority pays them and/or their family for murderous service. But just as the British did in 1929, the U.N., sits back and watches the violence, and then encourages even more with resolutions like the UNESCO vote about Hebron, denying centuries of Jewish heritage in Eretz Yisroel