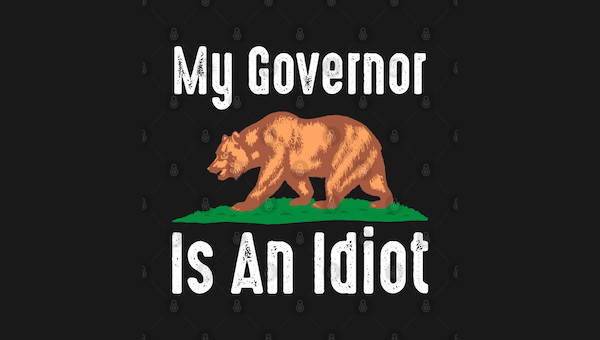 The left is nothing, if not vindictive, and their willingness to make absurd comparisons to get their way is nothing new.

The latest example of Democratic delusion comes to us from California, where nearly-recalled Governor Gavin Newsom is attempting to suggest that abortion rights and the Second Amendment are somehow commensurate.

In responding to the U.S. Supreme Court decision allowing the Texas abortion ban to stay in place, California Gov. Gavin Newsom on Saturday said he plans to propose a gun control law that would be modeled on the Texas one.

Newsom said the Supreme Court’s decision has set a precedent that will allow states to avoid federal courts when enacting laws.

If Newsome had brains as big as his ego, he would realize that the big part of the supreme court ruling was that Texans could sue about the Abortion law. That is what the case is about. The court will not rule about states and abortion until they decide on the Missouri case. The ruling will probably not be announced until the end of the session in late June.

There is no denying that Newsom was acting out of emotion rather than out of concern for his constituents.

“I am outraged by yesterday’s U.S. Supreme Court decision allowing Texas’s ban on most abortion services to remain in place,” Newsom wrote in a statement Saturday. “But if states can now shield their laws from review by the federal courts that compare assault weapons to Swiss Army knives, then California will use that authority to protect people’s lives, where Texas used it to put women in harm’s way.”

“If the most efficient way to keep these devastating weapons off our streets is to add the threat of private lawsuits, we should do just that,” he wrote.

It was difficult to ascertain whether or not Newsom was serious in all of this, given that his suggestion is both absolutely ludicrous but delivered with the sort of gravity that could see the embattled lawmaker actually attempt to move forward.

In the recent decision in Chief Justice John Roberts noted that

“The clear purpose and actual effect of S. B. 8 has been to nullify this Court’s rulings. … Indeed, “[i]f the legislatures of the several states may, at will, annul the judgments of the courts of the United States, and destroy the rights acquired under those judgments, the constitution itself becomes a solemn mockery.” United States v. Peters, 5 Cranch 115, 136 (1809). The nature of the federal right infringed does not matter; it is the role of the Supreme Court in our constitutional system that is at stake.”

With his bravado, Newsom has guaranteed that courts will strike down his law as an open “mockery” of gun rights precedent and he will actually box in liberal judges and jurists in voting against the California law on the same grounds.

Using some of the words of abortion supporters; it is clear that Gavin Newsom’s brain isn’t human, It’s just a clump of cells.