Two Rallies in Washington D.C. One Honored Dr King, The Other Spread Divisiveness

Unless you spent the last week on a different planet, you knew that there would be two rallies in Washington D.C. today, one to honor Doctor Martin Luther King Jr., the other to restore Honor to America. In the days leading up to today, there was much conjecture about each gathering. Liberals in the media blasted the Glenn Beck-run Restoring Honor rally predicting that it would be a political event filled with hatred, they also predicted the Al Sharpton-led rally would honor the memory of Dr. King. At the end of the day, it was the Glenn Beck rally on the steps of the Lincoln Memorial that Honored Dr. King, while Sharpton’s taught hatred and divisiveness.

On August 28th 1963, Dr. King sent a message to all Americans that combined his great faith, his honor for all people and his hope that together people could create a better America.

I say to you today, my friends, that in spite of the difficulties and frustrations of the moment, I still have a dream. It is a dream deeply rooted in the American dream.

I have a dream that one day this nation will rise up and live out the true meaning of its creed: “We hold these truths to be self-evident: that all men are created equal.”

I have a dream that one day even the state of Mississippi, a desert state, sweltering with the heat of injustice and oppression, will be transformed into an oasis of freedom and justice.

I have a dream that my four children will one day live in a nation where they will not be judged by the color of their skin but by the content of their character. 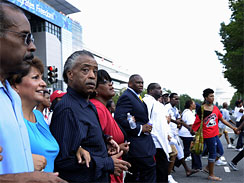 Forty-Seven years later Al Sharpton and a host of speakers stood in front of a group of 3,000 people and declared that Reverend King’s dream was their property alone.

“We will not stand silent as some seek to bamboozle Dr. King’s dream,” said Marc Morial, president of the National Urban League. “We reclaim the dream of Dr. King for the 21st century. We reclaim this dream because we are here to say we must be one nation. We stand on the shoulders of our fathers and mothers, grandfathers and grandmothers.”

Jaime Contreras, president of SEIU-32BJ, said those gathered at the Mall with Beck “represent angry white people and hate-mongering.” He added: “We will not let them stand in the way of the change we voted for!”

Avis Jones DeWeever, executive director of the National Council of Negro Women, drew thunderous roars when she challenged those gathered to stand up for their place. “Don’t let anyone tell you that they have the right to take their country back,” she said. “It’s our country, too. We will reclaim the dream. It was ours from the beginning.”

Sharpton, the man who incited two anti-Semitic riots that killed a total of nine people, also pushed a message of divisiveness.

Dr. King did say that one day some of you will own my dream. He never said that some would own his message, and others had to stay away, he said that we should unite in faith and freedom:

Across town at the Lincoln Memorial, the message was much different

Martin Luther King’s niece Dr. Alveda King, addressed the crowd of 3-500,000  with a plea for unity and prayer “in the public squares of America and in our schools.” She called for national unity by echoing her uncle’s declaring “I have a dream.”

“I have a dream that America will pray and God will forgive us our sins and revive us our land,” King said. “On that day, we will all be able to lift every voice and sing of the love and honor that God desires of all his children.”

Governor Palin’s message was also one of unity:

“We must not fundamentally transform America, as some would want,” Palin said. “We must restore America and restore her honor.”

“Here today, at the crossroads of our history, may this day be the change point,” Palin said. “Look around you. You’re not alone. You are Americans! You have the same steel spine and the moral courage of Washington and Lincoln and Martin Luther King. It is in you. It will sustain you as it sustained them.”

Beck’s message was an inclusive return to God, no matter how you worship. He called on Americans to go back to their churches, back to synagogues, and back to mosques.

“Something beyond imagination is happening. Something that is beyond man is happening,” Beck said” America today begins to turn back to God.”

….”Find out what you truly believe. When the storm comes up and your ship is being tossed, you gotta rely on something.”
“It happens the same way, it has since the Burning Bush. Moses. Freedom. And then they forget. They wander ’til they remember that God is the answer. He always has been. And then they begin to trust.”

The only mention of politics he made was a call for unity between Democrats, Republicans and Independents.

“Somewhere in this crowd — I know it. I have been looking for the next George Washington. I can’t find him. I know he is in this crowd. He may be 8 years old, but this is the moment. This is the moment that he dedicates his life, that he sees giants around him. And 25 years from now, he will come not to this stair, but to those stairs. And he can proclaim, ‘I have a new dream.’ That must be our goal: to raise the next great monument.”

Two rallies in Washington DC, one emphasized that the legacy of Martin Luther King was theirs and theirs alone.  The other called for people to join together and find their way to God.

Forty-Seven years ago, Dr Martin Luther King Jr. stood on the steps of the Lincoln Memorial and said.

Today at the Lincoln Memorial, that legacy was honored and renewed.

Trillions Of Microplastic Particles Are In Our Air, Water & Bodies – It’s Not Looking Good
April 21st, 2021 Sons of Liberty Media