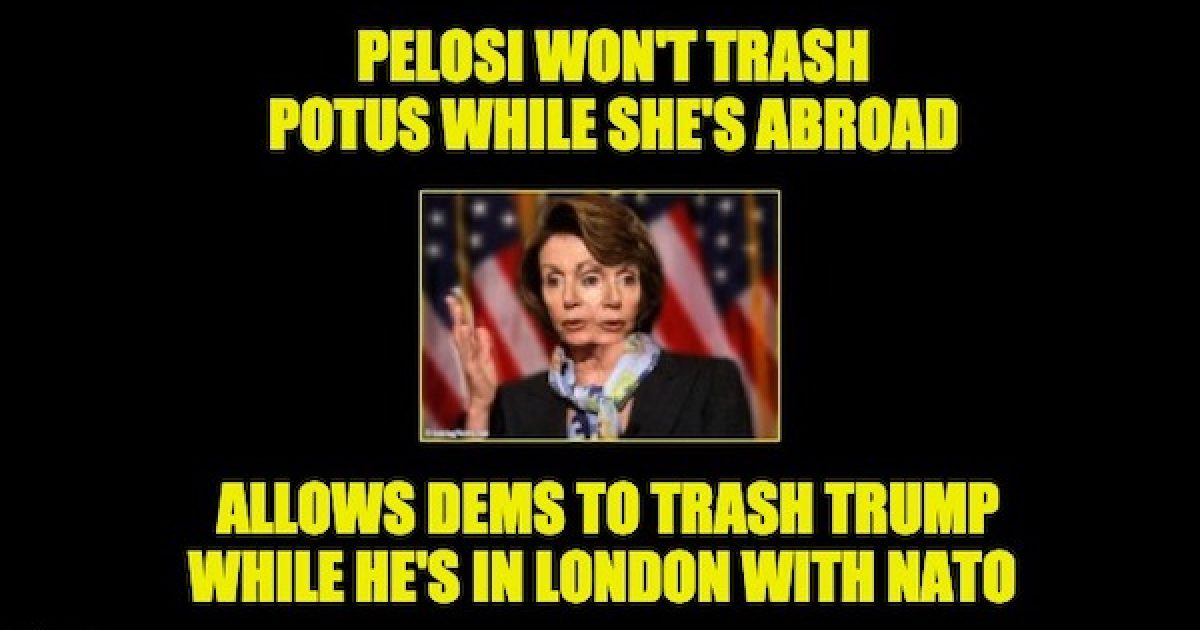 While leading a bicameral Congressional Delegation to Madrid, Spain, for the 2019 United Nations Framework on Climate Change, House Speaker Two-Faced Pelosi told reporters she has a rule forbidding her from speaking ill of President Trump but only while she’s abroad. But she allows her caucus to speak ill of President Trump in the name of impeachment while he is overseas.

‘We Don’t Talk About The President In A Negative Way’: Nancy Pelosi Talks Impeachment While Abroad In Spain https://t.co/tLv80ZYgtI

That is the tradition. But there is a similar tradition. One doesn’t speak poorly of the President when he’s overseas. For most of this week, President Trump is in Great Britain for essential meetings with NATO leaders. That didn’t stop Adam Schiff from releasing his bogus impeachment report and hold a press conference accusing the president of made-up crimes.  It also won’t stop Jerrold Nadler’s  House Judiciary Committee from holding a hearing Wednesday on the constitutional grounds for impeachment while the President is still overseas meeting with the leaders of NATO countries.

Sec. of  State Mike Pompeo was angry about the Democrat’s lack of consideration. He told Fox News:

“There is a long tradition that we support presidents when they travel overseas to do their work. For them to hold hearings back here in Washington to distract America’s president from his important mission overseas … it’s very unfortunate,”

Ken Starr, the former Special Prosecutor in the Clinton Impeachment case agrees with Pompeo, although he didn’t seem quite as diplomatic:

“It is, I think, outrageous, a great disservice to our country,” Starr said. “We have continuances and trials all the bloody time. So, why would you do this?”

Pelosi’s statement, along with allowing the bogus impeachment proceeding to continue while President Trump is negotiating with foreign leaders, shows that she is two-faced and doesn’t care about the country. She only wants to reverse the vote of the American people who elected President Trump to the presidency.