Did Twitter Suspend Cortes Because He Shared A Study He Found On The NIH Site Or Was It Because He Is A Conservative Who Worked On Trump's Campaign? 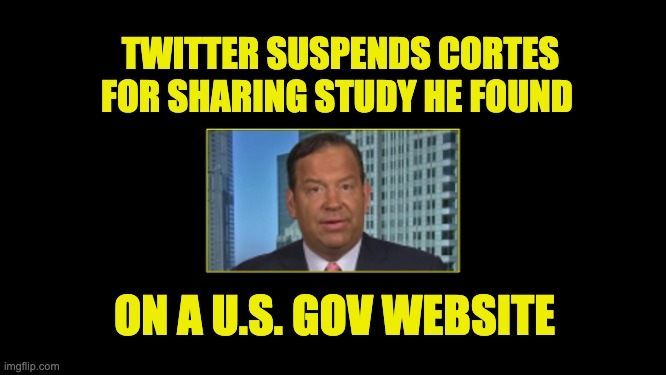 On Friday, National Pulse’s Editor-In-Chief Raheem Kassam posted that Cortes had been suspended along with a screenshot of the offending tweet.

Twitter has suspended @CortesSteve for citing a Stanford NIH study about masks. pic.twitter.com/2y460zkN0Z

What exactly was so controversial in this Stanford NIH study, besides the fact that the person sharing the study is a conservative who worked for Trump?

The peer-reviewed study basically says that masks don’t stop human-to-human transmission of COVID-19 and may actually be harmful to overall health both physiologically and psychologically. It was written by Baruch Vainshelboim of Stanford University and included citations from 67 scholars, doctors, scientists, and other studies to support his conclusions.

The article was posted on the National Center for Biotechnological Information — a government website. The NCBI is a branch of the National Institute for Health. It’s not surprising the study didn’t garner any attention from the corporate media, who are forever promoting “medical experts” and The Science, because it disagreed with their holy man Dr. Fauci. But the study was archived in the National Institutes of Health’s National Library of Medicine (NIH/NLM).

Not just any study gets posted on the NIH/NLM PubMed Central (PMC) site:

PMC is a repository of content primarily from two sources: peer-reviewed journals that overall have met NLM’s standards for PMC; and peer-reviewed author manuscripts deposited in compliance with the public access policy of NIH or other collaborating funders.

In other words, they don’t post fake studies, although they don’t always agree with them. “The presence of an article in PMC does not reflect an endorsement of, or concurrence with, the contents of the article by NLM.” Fair enough.

The purpose of the study was published as follows:

Many countries across the globe utilized medical and non-medical facemasks as non-pharmaceutical intervention for reducing the transmission and infectivity of coronavirus disease-2019 (COVID-19). Although, scientific evidence supporting facemasks’ efficacy is lacking, adverse physiological, psychological and health effects are established. Is has been hypothesized that facemasks have compromised safety and efficacy profile and should be avoided from use. The current article comprehensively summarizes scientific evidences with respect to wearing facemasks in the COVID-19 era, providing prosper information for public health and decisions making.

Here’s a selection from the hypothesis:

SARS-CoV-2 primarily affects respiratory system and can cause complications such as acute respiratory distress syndrome (ARDS), respiratory failure and death. It is not clear however, what the scientific and clinical basis for wearing facemasks as protective strategy, given the fact that facemasks restrict breathing, causing hypoxemia and hypercapnia and increase the risk for respiratory complications, self-contamination and exacerbation of existing chronic conditions…

…Although several countries mandated wearing facemask in health care settings and public areas, scientific evidences are lacking supporting their efficacy for reducing morbidity or mortality associated with infectious or viral diseases. Therefore, it has been hypothesized: 1) the practice of wearing facemasks has compromised safety and efficacy profile, 2) Both medical and non-medical facemasks are ineffective to reduce human-to-human transmission and infectivity of SARS-CoV-2 and COVID-19, 3) Wearing facemasks has adverse physiological and psychological effects, 4) Long-term consequences of wearing facemasks on health are detrimental.

Early on, when it was thought that the virus spread through droplets, Dr. Fauci said that masks “might stop a droplet or two,” and the World Health Organization said that the misuse of masks could create a “false sense of security” and actually increase the spread of the virus. Now, it’s practically heretical to suggest that masks might not be so effective at preventing human-to-human transmission even after vaccination. Boy, The Science™ on masks changed pretty quick!

An important note in the study is something that the people called “COVID deniers” have been saying from the beginning when there were calls for mask mandates — a cloth mask will do nothing against an airborne respiratory virus, and a medical mask won’t fare much better because the virus is so small it could pass right through.

According to the current knowledge, the virus SARS-CoV-2 has a diameter of 60 nm to 140 nm [nanometers (billionth of a meter)], while medical and non-medical facemasks’ thread diameter ranges from 55 µm to 440 µm [micrometers (one-millionth of a meter), which is more than 1000 times larger. Due to the difference in sizes between SARS-CoV-2 diameter and facemasks thread diameter (the virus is 1000 times smaller), SARS-CoV-2 can easily pass through any facemask.

And here is the entire conclusion:

The existing scientific evidences challenge the safety and efficacy of wearing facemask as preventive intervention for COVID-19. The data suggest that both medical and non-medical facemasks are ineffective to block human-to-human transmission of viral and infectious disease such SARS-CoV-2 and COVID-19, supporting against the usage of facemasks. Wearing facemasks has been demonstrated to have substantial adverse physiological and psychological effects. These include hypoxia, hypercapnia, shortness of breath, increased acidity and toxicity, activation of fear and stress response, rise in stress hormones, immunosuppression, fatigue, headaches, decline in cognitive performance, predisposition for viral and infectious illnesses, chronic stress, anxiety and depression. Long-term consequences of wearing facemask can cause health deterioration, developing and progression of chronic diseases and premature death. Governments, policy makers and health organizations should utilize prosper and scientific evidence-based approach with respect to wearing facemasks, when the latter is considered as preventive intervention for public health.

Cortes’ tweet that violated Twitter’s policy on spreading “misleading and potentially harmful information relating to COVID-19” quoted directly from the conclusion of the study he found on a government website, “The data suggest that both medical and non-medical facemasks are ineffective to block human-to-human transmission of viral and infectious disease such SARS-CoV-2 and COVID-19, supporting against the usage of facemasks.”

The study has some other great little tidbits in it, including this portion detailing the fatality rate of the virus that spread from Wuhan, which specifically cites Saint Fauci.

As of October 1, 2020, worldwide 34,166,633 cases were reported and 1,018,876 have died with virus diagnosis. Interestingly, 99% of the detected cases with SARS-CoV-2 are asymptomatic or have mild condition, which contradicts with the virus name (severe acute respiratory syndrome-coronavirus-2). Although infection fatality rate (number of death cases divided by number of reported cases) initially seems quite high 0.029 (2.9%), this overestimation related to limited number of COVID-19 tests performed which biases towards higher rates. Given the fact that asymptomatic or minimally symptomatic cases is several times higher than the number of reported cases, the case fatality rate is considerably less than 1%. This was confirmed by the head of National Institute of Allergy and Infectious Diseases from US stating, “the overall clinical consequences of COVID-19 are similar to those of severe seasonal influenza”, having a case fatality rate of approximately 0.1%.

Citing the flip-flopping Dr. Fauci to show that the infection fatality rate is actually lower than it seems…

At 5:01 PM on Monday, Cortes announced that he was back on Twitter.

Served my sentence for daring to use data to doubt the holy religion of masks.

Did Twitter suspend Cortes because he shared a study he found on the NIH site or was it because he is a conservative who worked on Trump’s campaign?

I can’t wait till the next time Twitter Jack testifies in front of the Senate. If the hearing is similar to the last one, Ted Cruz will verbally rip him into shreds.