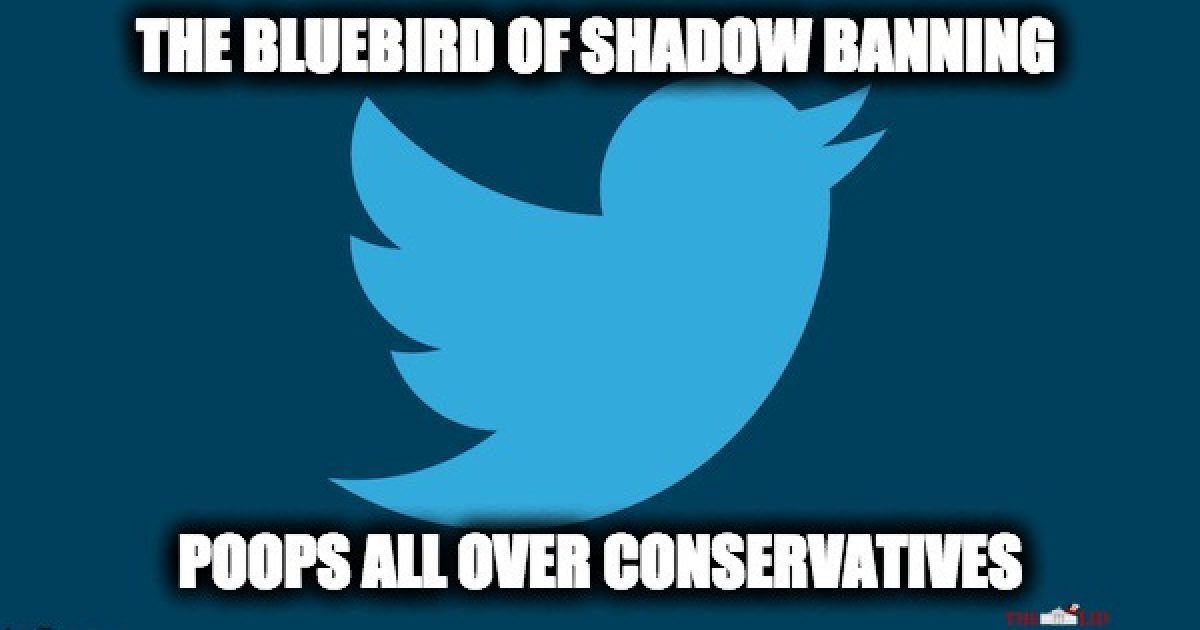 Twitter, one of the Internet’s most popular social media platforms, is run by liberals who have spent years making sure that conservative voices are oppressed on their app.

Conservatives have seen the results of this censorship for a long time and complained bitterly about it. But for just as long liberals have scoffed at the right’s accusations calling the complaints nothing but silly “conspiracy theories.”

Now the leftists are eating their words after their favorite left-wing site, Vice News has revealed the results of its look at the conservative accusations and found them to be extremely credible.

Conservatives have been complaining for years that social media giant Twitter has made sure that their tweets are squashed in an action called “shadow banning,” and for just as long, liberals have ridiculed conservatives. Thanks to Vice that is starting to change.

Vice recently reported that Twitter does not allow people searching for the names of prominent Republicans to show up. When a conservative’s name is put in the search box, they just don’t appear, they said. But Vice also found that Democrats don’t seem to suffer that fate.

Florida Republican Representative Matt Gaetz, for instance, recently found that he was being shadow banned.

Hey @Twitter, why are you specifically targeting me, as well as Reps. Mark Meadows, Jim Jordan, & Devin Nunes to be #Shadowbanned??

Rep. Matt Gaetz of Florida is one of the president’s most ardent defenders and has raised questions about the credibility of high-level people at the Department of Justice and FBI, along with Reps. Jim Jordan of Florida and Mark Meadows of North Carolina, both powerful conservatives.

“Is it only a coincidence that these allegations would arise the week following my heated exchange with Twitter Executives before the Judiciary Committee??” Gaetz tweeted Wednesday.

Vice agreed that conservatives are being quashed by Twitter:

Twitter is limiting the visibility of prominent Republicans in search results — a technique known as “shadow banning” — in what it says is a side effect of its attempts to improve the quality of discourse on the platform.

The Republican Party chair Ronna McDaniel, several conservative Republican congressmen, and Donald Trump Jr.’s spokesman no longer appear in the auto-populated drop-down search box on Twitter, VICE News has learned. It’s a shift that diminishes their reach on the platform — and it’s the same one being deployed against prominent racists to limit their visibility. The profiles continue to appear when conducting a full search, but not in the more convenient and visible drop-down bar. (The accounts appear to also populate if you already follow the person.)

Vice also added that “Democrats are not being ‘shadow banned’ in the same way.”

After the Vice report, some lefty journalists are finally starting to become convinced that Twitter is a partisan actor and not a service offering free speech equally to all users.

Left-winger Jonathan Swan, for instance, noted that he is starting to believe the conservatives.

“Must admit that when some Republican sources have complained about this to me, I mocked them to their face as conspiracy theorists. This Vice article makes me rethink that, and response from Twitter is inadequate,” he said.

Must admit that when some R sources have complained about this to me I mocked them to their face as conspiracy theorists. This Vice article makes me rethink that, and response from Twitter is inadequate. https://t.co/zjAnFV5dzT via @vicenews

And what was that “inadequate” response? Twitter boss Jack Dorsey only said that Twitter has “a lot more work to do to earn people’s trust on how we work.”

A short thread addressing some issues folks are encountering as a result of our conversational health work, specifically the perception of “shadowbanning” based on content or ideology. It suffices to say we have a lot more work to do to earn people’s trust on how we work. https://t.co/MN97l7w7RF

Vice went on with quite a bit of evidence that the shadow banning was going on.

For one, Twitter insisted that it isn’t doing anything wrong… Vice wrote:

Presented with screenshots of the searches, a Twitter spokesperson told VICE News: “We are aware that some accounts are not automatically populating in our search box and shipping a change to address this.” Asked why only conservative Republicans appear to be affected and not liberal Democrats, the spokesperson wrote: “I’d emphasize that our technology is based on account *behavior* not the content of Tweets.”

Twitter directed VICE News to a May 15 blog post that explained the company’s new approach to combating “troll-like behaviors.” After making changes to its platform, the company said that “[t]he result is that people contributing to the healthy conversation will be more visible in conversations and search.”

And imagine this… “Twitter did not respond to a follow-up question.”

But Vice found it was getting worse:

Twitter’s troll hunt, however, has ensnared some of the most prominent Republicans in the country. Type in the names of McDaniel, conservative members of Congress like Reps. Mark Meadows, Jim Jordan, and Matt Gaetz, and Trump Jr.’s spokesman Andrew Surabian, for example, and Twitter’s drop-down search bar does not show their profiles. The search menu also does not display the verified profile of Rep. Devin Nunes of California, only his unverified one that he seldom uses to post.

That limits their visibility and the ease of finding their profiles compared to their liberal counterparts.

The company’s drop-down search bar has also been excluding several prominent racist figures on the alt-right, such as Jason Kessler, who organized last year’s white nationalist rally in Charlottesville, Virginia. The platform has also demoted a smattering of far-right figures like Mike Cernovich, as Gizmodo reported earlier this week.

But the rationale determining which accounts auto-populate in search results and which don’t is unclear. InfoWars and its leader Alex Jones have not been demoted despite often spreading false news and right-wing conspiracy theories, for example. Republican Rep. Steve King — who has tweeted that immigration should be limited because “we can’t restore our civilization with somebody else’s babies” — also appears to be unaffected by this change to the company’s search function. He retweeted a self-proclaimed “Nazi sympathizer” last month and declined to take it down when notified of the person’s history.

“This isn’t evidence of a pattern of anti-conservative bias since some Republicans still appear and some don’t. This just appears to be a cluster of conservatives who have been affected,” said New York Law School Professor Ari Ezra Waldman, who testified at the House Judiciary Committee’s April hearing on social media filtering and is the author of Privacy as Trust: Information Privacy for an Information Age. “If anything, it appears that Twitter’s technology for minimizing accounts instead of banning them just isn’t very good.”

That is an awful lot of facts for Twitter to deny, isn’t it?

So, it’s true. The liberals that run Twitter really are making sure that conservative voices are oppressed on their social media platform.