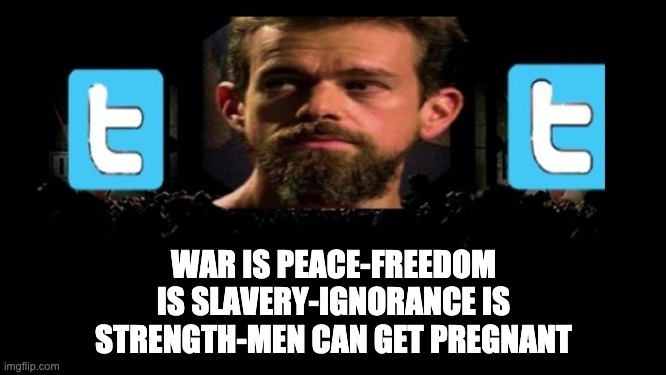 It seems that speech police at Twitter have declared a jihad on science and truth.  On Sunday, Fox News reported that Francisco José Contreras, a deputy to Spain’s right-wing Vox Party, was handed a 12-hour suspension by Twitter for the egregious act of stating that “a man cannot get pregnant” because men have “no uterus or eggs.” Twitter ban Is 1984

Call us crazy, but the last time I looked, that was pretty much-settled science.  But of course, the bizarro-world 1984 Ministers of Truth at Twitter know better.

Contreras’ comments were in response to an article he shared on the social media platform about a transgender male who announced they were a father after giving birth to a baby girl.

Contreras said in a Facebook post on May 11 that he had received a message from Twitter which informed him that he had violated its policies on “hate speech” for the remarks.”

“The hateful tweet (which I was forced to delete) was one that said: ′′A man cannot get pregnant. A man has no womb or eggs”,” Contreras wrote in response to the move. “You can see this is already fascist biology. Next time I’ll try 2 + 2 = 4.”

He’d better be careful — who knows what that will prompt Twitter to do.

Twitter claimed that Contreras violated its policy against material that threatens, harasses, or fosters violence against other people on the basis of their race, ethnic origin, nationality, sexual orientation, gender, gender identity, religion, age, disability, or disease, Fox News said.

So let’s get this right.  Stating a fact that has been known for centuries “fosters violence,” according to Twitter.

Twitchy said the suspension “led to the creation of an #AManCannotBePregnant hashtag campaign.”

If I say the grass is green, will they suspend me too? ?

If the grass is actually green, chances are they will.

Twitter in 2021 is the Church in 1633, when Galileo dared to say that Earth moved around the Sun. Life is basically the struggle for liberty between humanity and its zealots who want to bring it back to the dark ages.

Contreras said he is not bowing down to the ignorant speech controllers at Twitter.

“We will not yield to Twitter imposing a twisted (and anthropologically wrong) worldview,” he told LifeSite News.  “We will continue to speak the truth about human nature. Biological truth should not be regarded as ‘hate speech. It’s biology, not bigotry.”

These twitter speech police prove that Orwell was right he just got the year wrong. Welcome to “1984.”