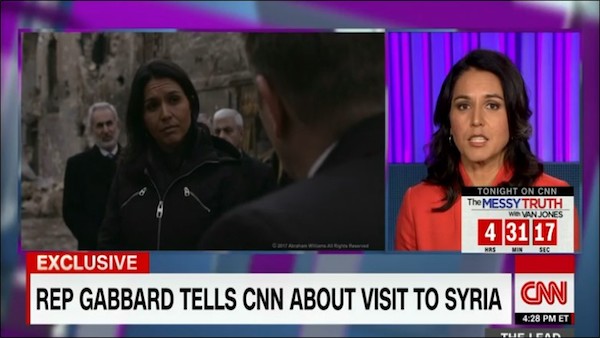 Congresswoman Tulsi Gabbard (D-HI) is a liberal from the state of Hawaii and she seems to be more intellectually honest than her Democrat counterparts in Congress. Appearing on the Tucker Carlson show she defended President Trump’s move to stop sending arms to Syrian rebels. Unlike her liberal colleagues in Congress, she said it had nothing to do with Russia and everything to do with the fact that those arms were ending up with al Qaeda.

For years Rep.Tulsi Gabbard has been working with the some in the GOP to force the federal government to stop arming al-Qaeda and ISIS allied terrorists in Syria.

We’ve written about her efforts before – you can read about her attacking President Obama’s weakness on radical Islam here, here, and here. Her work had been for naught, until now.

Last week, President Trump finally ended the CIA-backed program that was funding and arming the Syrian rebels. Here’s the thing, we weren’t just funding and arming anti-Assad troops, we were also funding and arming pro-al Qaeda forces in Syria. We were literally handing money and guns to terrorists who work for al Qaeda, and we’ve been doing it for years!

So did the liberal media and their friends on the left cheer when President Trump finally ended this ridiculous program? Nope, they implied that he only did it as a favor to the Russians.

The Amazon Washington Post fabricated the facts on my ending massive, dangerous, and wasteful payments to Syrian rebels fighting Assad…..

Seriously. Thankfully, Congresswoman Gabbard was willing to clear things up by appearing on Fox News with Tucker Carlson to explain why not arming al Qaeda is a good thing for the United States too, and not just Russia.

Tulsi Gabbard: For the benefit of your viewers, let’s talk about what this CIA program actually was. It has been widely reported that for years now, the CIA was providing arms, intelligence, money, and other types of support to these armed militants who were working hand in hand, and who are working hand in hand, and often times under the command of al-Qaeda in Syria.

This isn’t a matter of giving weapons to people, but they end up falling into the wrong hands. We are directly arming militants who are working under the command of al-Qaeda, all in this effort to overthrow the Syrian government.

Tucker Carlson: That is grotesque. Why would anyone defend this?

Tulsi Gabbard: It is this addiction to regime change. And this idea that somehow this is what must be done, without actually looking at the facts. We have been providing direct and indirect support to al-Qaeda, the very group which attacked us on 9/11, that we are supposedly continuing to fight against and trying to defeat.

The thing that should make everyone feel sick is that people would rather support, directly and indirectly, al-Qaeda, than actually give up their regime change goals.