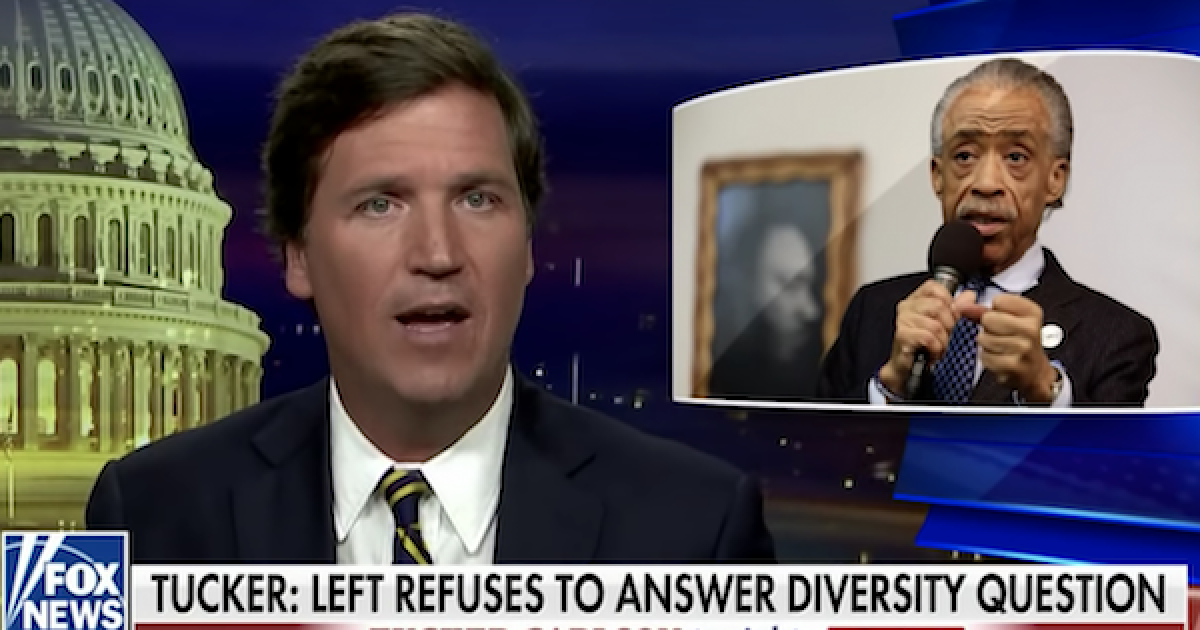 This time the liberals picked on the wrong person, Fox New’s Tucker Carlson because Tucker can out-logic them two hands tied behind his back.

The liberals continually make demonstrably fake claims of racism. And some of them are really crazy. Like when CNN’s Jeff Toobin recently claimed that verbal attacks on the Terrorist group ANTIFA are racist. Or during eight years of Barack Obama’s Presidency every time a conservative disagreed with one of his policies the left claimed it was because of some deep seeded racism. A document put out by the University of California which seeks to help students recognize so-called racist microaggressions such as, “I believe the most qualified person should get the job,” or “America is the land of opportunity,”  personal favorite racist microaggression in the document was that it is racist to say, “I’m not racist.”

Tucker Carlson set of the liberal critics because he disagreed with a leftist claim that  “diversity” is America’s “greatest strength.”

Think about that one for a second. Here’s an extreme example.  Would you want to be rolled into surgery just only to find out the hospital has a policy of diversity of mental capacity and the guy who is about to cut you open has an I.Q. of 12?

Tucker, of course, put it better. In his comments, Carlson slammed the left’s empty notion that diversity for the sake of diversity is what makes America great. During his show, the Fox host insisted that a common national identity and shared purpose is what makes a country great, not disconnected, wild diversity. And you know on a day like 9/11, a horrible day that motivated Americans to have a common national identity and shared purpose, that point really resonates.

In his comments last week Tucker questioned the liberal’s point that diversity is “our greatest strength:”

How, precisely, is diversity our strength? Since you’ve made this our new national motto, please be specific as you explain it. Can you think, for example, of other institutions such as, I don’t know, marriage or military units in which the less people have in common, the more cohesive they are?

Do you get along better with your neighbors, your co-workers if you can’t understand each other or share no common values? Please be honest as you answer this question.

And if diversity is our strength, why is it okay for the rest of us to surrender one of our central rights, freedom of speech, to just a handful of tech monopolies? And by the way, if your ideas are so obviously true, why does anyone who question them need to be shamed, silenced and fired?

The liberals immediately launched into their favorite pastime they slammed Carlson for his segment on diversity calling him a “racist” and a “white nationalist.”

But in a series of tweets, Carlson replied to the leftist attack:

The organized left is lying about a segment we did on Friday night. Our topic was “diversity is our strength,” a phrase our leaders use to end conversation rather than spur it. You hear it all the time. We asked, what exactly does it mean? Is it true?

“Do you get along better with your neighbors and coworkers if you can’t understand each other, or share no common values? And if diversity is our strength, why is it OK for the rest of us to surrender our freedom of speech to just a handful of tech monopolies?”

These are the questions our leaders out to be asking every day. How does a nation of 325 million people hang together? What do we all have in common as Americans? Why should we remain a country? Nothing is more important than answering this.

But our leaders aren’t even asking these questions. Instead they’re trying to silence anyone who raises them, while at the same time promoting mindless tribalism for political expedience. Division keeps them in power.

What’s at stake isn’t a cable news segment. It’s the existence of rational conversation in America. If they can prevent you from asking honest questions, there’s nothing they can’t do. More on this tomorrow night.