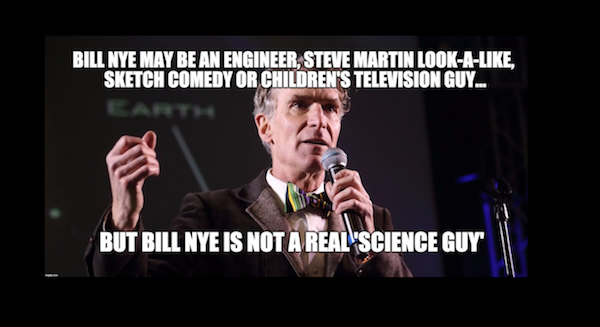 William Nye, who goes by the nom de plume, “Bill Nye, the science guy,” Was interviewed on the Tucker Carlson program on Monday and fell victim to Carlson’s brilliant interview style–generally Carlson takes his guests  points as true, and asks questions that that anyone generally interested in learning more may ask, but those questions usually expose the holes in the guest’s logic.  When one considers that Nye is children’s TV entertainer not a scientist, and has at times, been ridiculed by climate experts, it’s not surprising that Carlson asked Nye some basic questions which Nye couldn’t (or didn’t want to)  answer.

After introducing the subject, including Nye’s call to send skeptics to jail, Carlson explained that we’ve always have had climate change so the real question is why is it happening and who is causing it.

A simple question that Nye didn’t want to answer so he started playing games with the words Tucker Carlson used:

“So the word ‘degree’ is a word that you chose, but the speed that climate change is happening is caused by humans. Instead of happening on time-scales of millions of years, or let’s say, fifteen thousand years, it’s happening on a time-scale of decades, and now years.”

“To what extent is human activity responsible for speeding that up?” Asked the host, “100%” Nye answered, “If that’s the number you want. Humans are causing it to happen catastrophically fast.”

Carlson continued, “OK so at what rate would it have changed without human activity? You look annoyed that I’m asking these questions, but they’re very basic questions. They’re not denial.”

“OK, answered the not a science guy as he went on to give an answer that proved his lack of science training,  “so, basically, the cycles of climate change, the last ice age we had was tens of thousands of years ago.”

Er..Bill, the last ice age we had ended a bit less than 12,000 years ago. That is something Nye would know if he was a climate scientist, or if he took Earth Science 101 as a college freshman as I did.

Nye continued,  “So, uh, bear in mind that in ancient dinosaur days there was more carbon monoxide, the world was warmer than it is now, there was an inland sea in what is now Wyoming. I understand you have a member of Congress from Colorado used to be underwater and you can go to Dinosaur National Monument to see it, but that was millions of years ago.”

Carlson interjected, “You just said it was tens of thousands,”

“That was the ice age,” Nye corrected “The rate, the rate is the problem. Now here’s the thing – half of the people in the world live on sea coasts. As we get the ocean a little bit warmer, the ocean is going to expand, and people on the sea coast are going to be displaced.”

‘OK, but you’re changing,” Carlson corrected him,  “you’re not answering my question.”

Tucker Carlson asked the question a different way. Pointing out that Nye contends the rate of climate change is accelerating, the Fox host asked how much of that acceleration is caused by humans. Getting semantically snobby to cover up the fact he didn’t have the answer, Nye said “The word ‘accelerated’ is an understatement, It’s happening extraordinarily fast.”

Okay Mr Nye, then let me ask you something Tucker didn’t. If the speed of climate change is accelerating, why does the satellite data show there hasn’t been an increase in temperature for the past 18 years? That seems to me as if it was slowing down.

“I’m asking you a simple question,” Carlson tried again. “And because the science is settled, I hope you can answer it in simple terms, which is, without human activity would it have taken for us to reach this level of warmth in our climate.”

Ah, it’s not clear that it would have happened. In other words, humans have changed the climate so drastically that we almost certainly avoided another ice age. There would have been another ice age – ain’t gonna happen. Because of you and me. So the sooner we get to work on this problem –

“So when would it have happened?” Carlson asked again.

“When would the next ice age have happened? Is that your question? I claim that’s irrelevant,” claimed Nye.

To Bill Nye, ‘that’s irrelevant” really means “I have no freaking idea.”

There is more Tucker Carlson destruction of Bill Nye in the video below.  But before you view it, allow me to take this opportunity to tell you a bit more about the supposed “Science Guy” 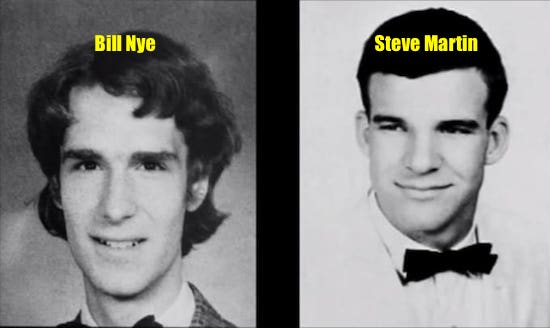 A vocal supporter of the climate change hypothesis, Nye isn’t more qualified to speak about climate science than any other non-scientist. He has a B.S. in mechanical engineering from Cornell University, and worked at Boeing in the mechanical engineering department. His entry into TV was not because of any science expertise but because he won a Steve Martin look-alike contest and began moonlight as a stand-up comic by night. Eventually he quit Boeing and became a comedy writer and performer on a sketch comedy television show in Seattle, Washington, called Almost Live! The host of the show, Ross Shafer, suggested he do some scientific demonstrations in a six-minute segment, and take on the nickname “The Science Guy”.

Based on his background Nye should not be presenting himself as an expert in climate science but rather someone with expertise in mechanical engineering, looking like Steve Martin, sketch comedy, or children’s television. However, thanks to the First Amendment to the Constitution, Nye has the right to present himself as anything he wishes without getting thrown in jail, the same way the Amendment protects the so-called skeptics who believe the science disproves the man-made climate hypothesis. And Tucker Carlson has the right to ask Nye questions that would be easy for him to answer if he knew what he what he was talking about.

A video of Carlson’s evisceration of Bill Nye is below: