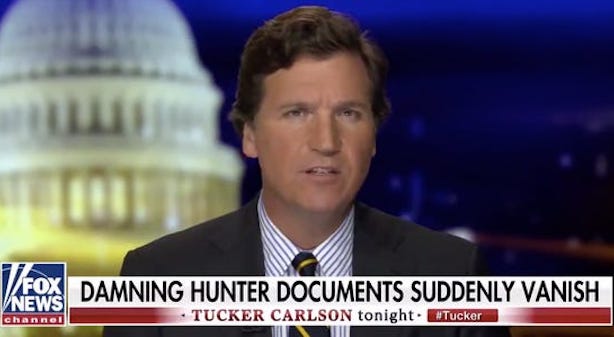 UPDATE at the bottom of Post: tucker Biden documents found

On Wednesday, Fox News’ Tucker Carlson said a trove of documents about the Hunter Biden scandal was shipped from New York to where he was located in Los Angeles, using UPS. Somewhere along the way, the envelope was opened and documents removed– no copies were made before they were sent. Carlson did not identify the company, but it was later revealed by Business Insider. tucker Biden documents stolen

Tucker broke the news about the missing documents on his Wednesday night show.

Tucker describes the documents as being from a “source. The fact he was in LA to interview Tony Bobulinski means the source was not Mr. Bobulinski.

Tucker explained the shipping company did its best to find out what happened:

The company immediately launched an investigation, tracing the envelope from the moment it was dropped off in New York, until 3:44 a.m. Tuesday, when an employee at a sorting facility in another state noticed that the package had been opened and arrived empty.

“The company security team interviewed every one of its employees who touched the envelope we sent,” Carlson said. “They searched the plane, and the trucks that carried it, they went through the office in New York where our producer dropped that package off, they combed the entire cavernous sorting facility, they used pictures of what we had sent, so that searchers would know what to look for.

“They went far and beyond, but they found nothing. Those documents have vanished,” Carlson concluded. “As of tonight, the company has no idea and no working theory either about what happened to this trove of materials, documents that are directly relevant to the presidential campaign just six days from now.”

How strange.  I am sure packages get lost, but how often are envelopes opened, contents removed, and the envelope sent on its merry way?

In an emailed statement, Zaccara said: “The package was reported with missing contents as it moved within our network.

“UPS is conducting an urgent investigation into this matter and regrets that the package was damaged. The integrity of our network and the security of our customers’ goods are of utmost importance. We will remain in frequent, direct contact with Fox News as we learn more through our investigation.”

Of course, this raises some serious questions. Why weren’t copies made? To be honest, If it was me, I would have kept the originals and sent the copies.  Tucker said he has pictures. Were the photos good enough to show America what was in the Documents?

We may find that out soon because they have been found/

Around midday Thursday, UPS Senior Public Relations Manager Matthew O’Connor told Business Insider that the documents had been found and were on their way back to Carlson.

It remains unclear what happened to them.

He said: “After an extensive search, we have found the contents of the package and are arranging for its return.”

“UPS will always focus first on our customers, and will never stop working to solve issues and make things right. We work hard to ensure every package is delivered, including essential goods, precious family belongings and critical healthcare.”