Trust In Media Has Fallen To All-Time Low 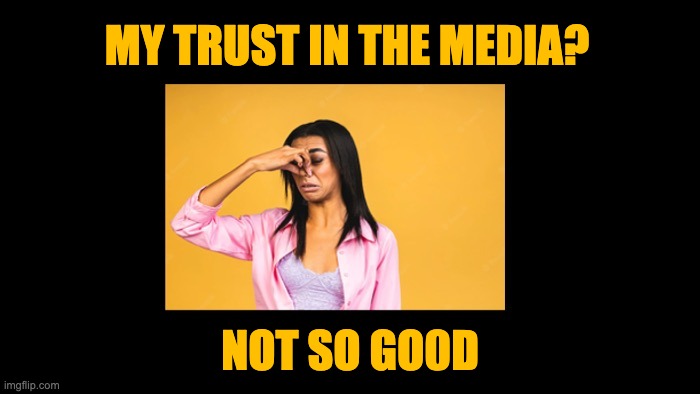 Judging by what they have been feeding Americans, it’s no surprise that the I&I/TIPP Poll reports that trust in the media has fallen to all-time lows.
g

The I&I/TIPP Poll tracks media trust monthly, asking the same two questions to respondents: “How much trust do you have in the traditional or established news media (Example: Washington Post, New York Times, NPR, CBS News, etc.) to report the news accurately and fairly?” Question two asks the respondents about what I&I/TIPP describes as “alternative media;  less-mainstream outlets, the New York Post, Washington Times, News Max, The Daily Caller, and Real Clear Politics, among others.”

Their selection of alternative media is a bit strange because it only includes huge media and is biased toward conservative media. The traditional media category leans toward left-wing media. But it doesn’t really matter because the trust numbers for each category are so low it’s an indication that for the vehicles to earn back the people’s trust, perhaps they should find new people to produce the editorial and tell the original staff to learn to code.

Not surprisingly, based on the editorial skew of traditional media, 54% of  Democrats (54%) trust the Big Media outlets, and 42% say they don’t trust traditional media outlets. This shouldn’t be a surprise because, at times, their editorial seems as if the reporter is an expert in Democratic Party talking points.

Due to similar reasons, a tiny 15% of Republicans trust the media, and 81% say they don’t trust it. Nothing gives credence to the GOP numbers is the media reporting of and restating the hyperbolic claims of the Democrats, such as the Republicans are trying Democracy or using the opinions of one senator (Rick Scott R-FL) about social security and medicare and applying it to the entire party. The editorial staffs of these mediums report hyperbole without context or evaluating the rationale for the statements (if there is any).

Among independents, the unofficial third party in America, the comparable numbers are 26% “trust” and 66% “no trust.”

The “alternate media” results are even worse. As Shakespeare wrote in Othello, “Heaven truly knows that thou art false as hell,” and so do the American people. All three groups Dems. GOP, end independents, do not trust the alternate media. “Dems show a trust/no trust ratio of 36% to 58%, compared to the GOP’s 21% to 74% and independents’ 18% to 71%.”

The I&I/TIPP Poll confirms what most already knew, the “Major” media is not trusted. It would be even more interesting if their “alternative media” selection was really alternative media. For example, instead of mega websites, perhaps they could put together a set of large to medium sites, broadcast radio and internet radio, and TV to reflect the people’s perceptions of the actual alternative media.