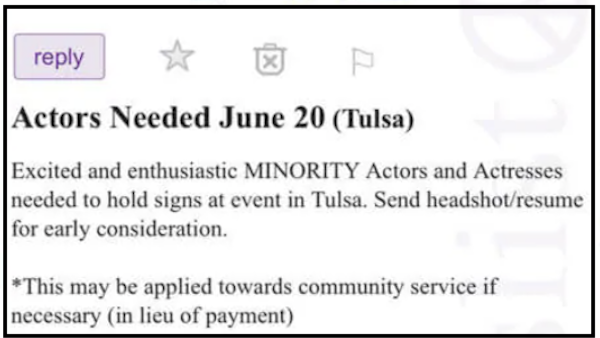 While the Democrats and their puppet talking heads in the mainstream media scream that such a gathering is only going to worsen the media-fabricated COVID hysteria, they have conveniently forgotten how heroic they thought the thousands of Antifa and BLM rioters were who participated in massive demonstrations and the destruction of cities across America as they cheered them on. COVID was not an issue for them then.

No doubt, the vast majority of the nearly one million who have signed up to attend the Tulsa rally, the venue for which seats only 19,000, are proud patriots. However, you can be sure that anti-Trump protesters will be out in force. There are ads for minority actors” to show up in Tulsa, perhaps to create as much chaos as they can to disrupt the event. Or to be a tool for the leftist MSM to say any person of color who shows up at Trump’s Tulsa rally is just an actor paid for by the Trump campaign

Although the ad doesn’t mention President Trump, the map on the ad marks the location of the BOK Center, where Trump’s Tulsa rally is taking place. The rally is June 20.

According to Politifact, the ad, originally posted on Facebook, was flagged as a part of Facebook’s efforts to fight misinformation and fake news. Politifact said the ad is no longer on Craigslist and has been flagged for removal.

This will likely be a very big problem. Watch for the left to go all-in to disrupt the event. As for the Deep State going broke, don't count on it. Soros and Big Tech have tons of money.

Apparently, this kind of ad is nothing new.

These Craigslist ads have been posted before every Trump rally since 2015. It’s how they choose the majority of the people that sit directly behind him on the stage.

This ran on Facebook before the November 2019 rally in Phoenix. 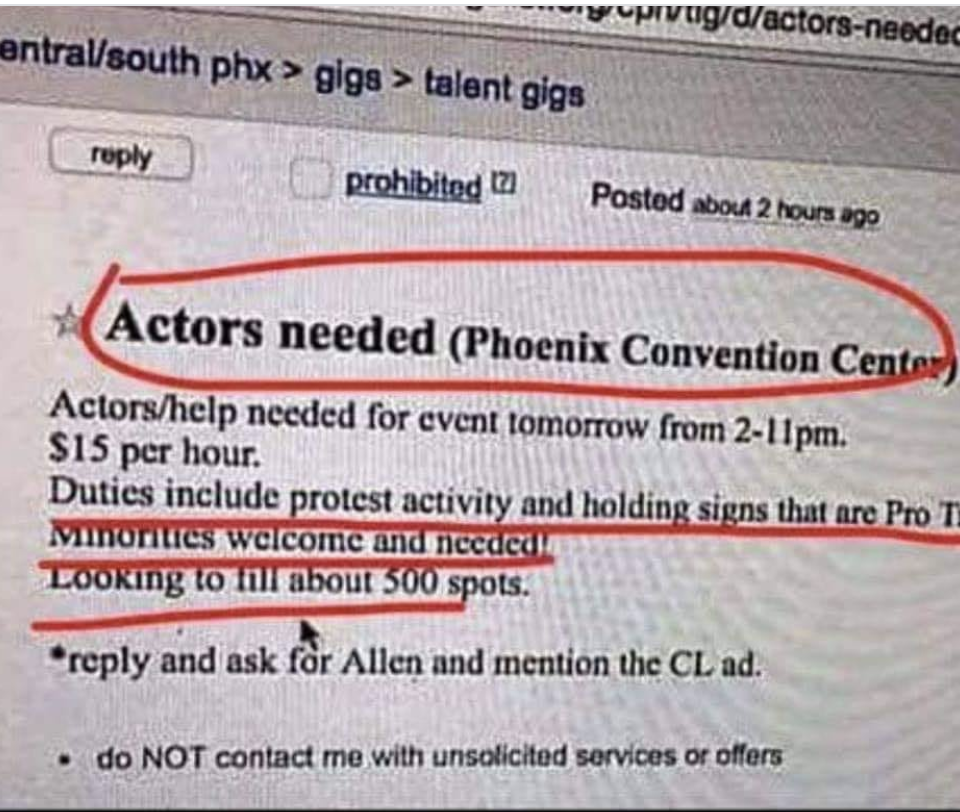 Whether you think the ad ran so the left can hire people to cause a disturbance Saturday or to give them an excuse to say that the President’s minority support is nothing but a bunch of paid actors…it doesn’t matter. The ad is fake, and in all probability, it was placed by leftists. It’s just another left-wing dirty trick.