Wonder If Obama Lost Money During His Two Terms? Wonder If Biden Remembers What Money Is? 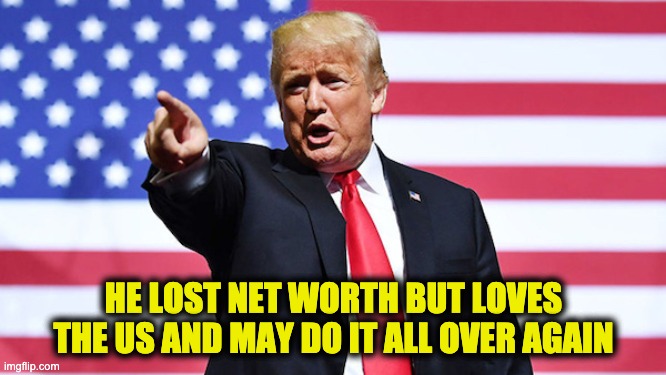 That being said, the former POTUS probably didn’t care about losing money. He knew what he was getting into when he came down the Trump Tower escalator to declare his candidacy back in 2015. But losing a billion dollars is what can happen when you don’t take a salary or make any business deals for four solid years.  During that time, how many times have the Democrats and their sycophants in the media made false accusations that Donald Trump was using the presidency to enriching himself?

WASHINGTON – The presidency appears to have cost Donald Trump more than $1 billion in wealth.

Trump tumbled nearly 300 spots on Forbes’ billionaire rankings during his presidency, the magazine reported this week, with his estimated wealth falling from $3.5 billion to $2.4 billion during his four-year term (…) That’s still good enough for 1,299th place on the magazine’s new billionaire list, down from 1,001st last year.

The list is topped by a frequent political target of Trump: Amazon and Washington Post owner Jeff Bezos, whose wealth is tagged at $177 billion.

“If he had sold everything on Day 1, paid the maximum capital-gains taxes on the sales, then put the proceeds into a conflict-free fund tracking the S&P 500,” Alexander wrote, “Trump would have ended his presidency an estimated $1.6 billion richer than he is today.”

This is another example of the love Donald Trump has for this country. Outside of politics, he has an easy life. Instead, he spent four years as president, turning around the economy and making America strong internationally. While he sat in the oval office, he not only faced the built-in pressures of the office but had to bear four years of lies, leaks, lawsuits, and libels from his political opponents and the mainstream media.

The loss of net worth is not a surprise to anyone, including the former president.  What is a surprise is that he may be willing to do it again, face four more years of lies, libels, and loss of net worth just because he loves this country and wants to put it back on the right path that the socialist Democrats have knocked America off of in just three short months.