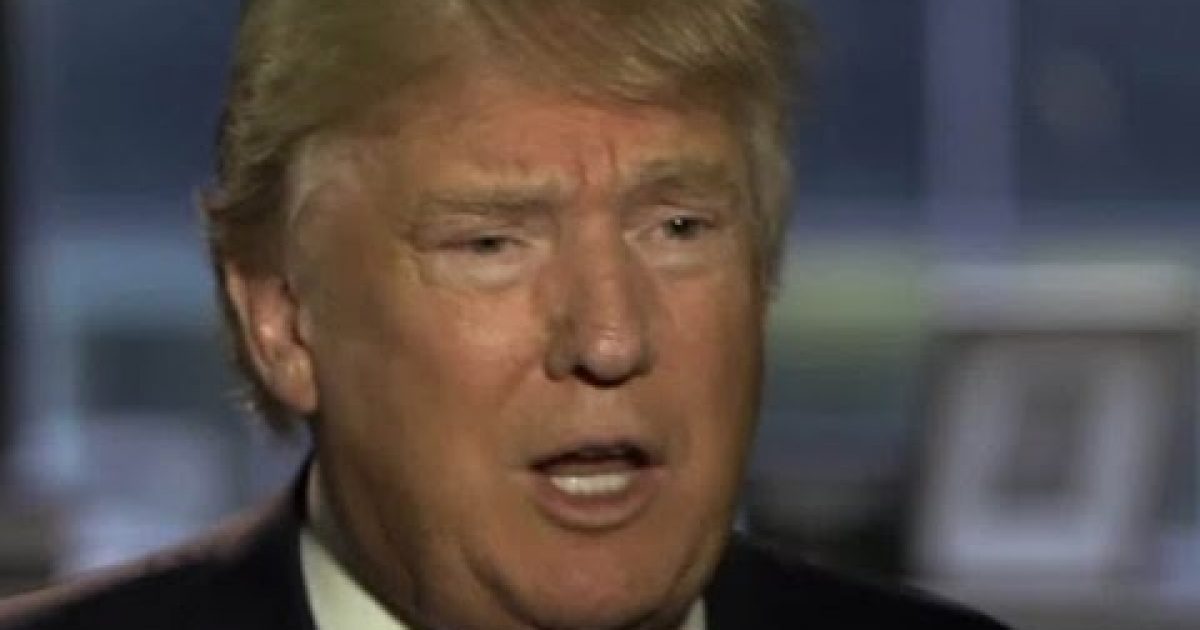 On Monday, Donald Trump told CNN’s Erin Burnett that we should allow Russia and Syrian President Assad fight it out against ISIS and then come in to pick up the pieces (video embedded below):

And I’m saying, ‘Why are we knocking ISIS and yet at the same time we’re against Assad?’ Let them fight, take over the remnants. But more importantly, let Russia fight ISIS, if they want to fight ‘em … in Syria,” Mr. Trump said.

“Let Syria and ISIS fight. Why do we care?” he said.

“We have to get rid of ISIS, very importantly, but I look at Assad, and Assad to me looks better than the other side,” he said. “And you know, this has happened before. We back a certain side, and that side turns out to be a total catastrophe. Russia likes Assad, seemingly, a lot — let them worry about ISIS. Let them fight it out.”

It’s a strange and naive statement from a man who constantly talks about the country’s lack of leadership  (I agree with him on that point). It’s as if he is taking Obama’s strategy of leading from behind to a brand new level.

Trump’s comment’s reflect a fundamental misunderstanding of American interests in the Middle East.  We would not just be allowing Russia to “save” Assad in Syria and defeat ISIS, for the first time since Anwar Sadat threw out the then USSR in the late 1960’s we will be allowing Russia to control the Middle East. With Russian control of the Middle East, comes an increase in the power and influence of another of Putin’s buddies, the Iranians.  Even Trump knows that is a bad thing. Trump warned about Iran in his comments about the P5+1 deal:

After the agreement goes into effect: All nuclear-related sanctions will be lifted. Iran receives a windfall of $150 billion, which will no doubt fund terrorism around the world. Iran will receive notice before any inspections take place. Iran can block inspection of certain facilities. Iran will soon be able to continue expanding its conventional arms and guided missile programs without facing snapback sanctions. Iran can keep American prisoners, including one former U.S. Marine and, very sadly, a Christian minister. Iran can continue to operate about 6,000 centrifuges. Other countries will be free to invest in Iran. Iran can continue to solidify bonds with Russia, China and North Korea. All these other countries will benefit, and the United States loses on all fronts.

An Iran in a Russian-controlled Middle East will do all that and more. For example,  Iran keeps threatening  to close the Strait of Hormuz. Twenty percent of oil traded worldwide moves by tanker through the Strait of Hormuz, a thin transit point squeezed between Iran and the UAE. Closing the Strait would cripple the world’s energy supply.

Why would Russia allow Iran to do that? Well for one thing it wouldn’t hurt the Russian oil distribution chain, and it would raise the price of oil, adding much needed cash to the Russian economy.

A Russian backed Iran will use its new power to try and topple the Sunni Muslim Saudi Arabian ruling monarchy, which is a goal of the Shia Muslim Iranians.  Iran believes it should be the leader of the Muslim world and through their control of a new Saudi Govt. Shia Islam would control the Islamic world.

In fact Iran is already funding the Houthi terrorists in Yemen.

The Houthis have pledged to topple the Saudi throne; they chant “death to America” and have friendly relations with Iran. Nothing could be more threatening to the Saudis than a grassroots populist movement of this militant sort, and that it springs from a Shiite population makes it worse. The Saud dynasty is allied at home with the Wahhabi movement, which typically views Shiite Muslims as worse idolators than Hindus. Still, the late King Abdullah appointed two Shiites to his national Advisory Council, the embryonic Saudi parliament, and deployed the Ismaili Shiites of Najran against Yemen. It is not Shiite Islam that is the red line for the kingdom, but populist movements that talk dirty about the Saudi monarchy.

Iran also controls Hezbollah, the terrorist organization that for all intents and purposes runs Lebanon.  Hezbollah is not only a threat to Israel, but to the United States as it grows its network in Latin America. As recently reported by Breitbart:

Iran is infiltrating Latin America thanks largely to Hezbollah, a Shiite terrorist group that has sworn loyalty to Iranian Ayatollah Ali Khamenei, showing overt preference to the Tehran dictator over its host-state Lebanon. Hezbollah, along with Iran’s Revolutionary Guard Corps (IRGC), have provided the on-the-ground support needed for the proliferation of Iran’s Khomeinist ideology.

Breitbart News’ sources have unanimously refuted the assessment of Obama’s State Department, which has claimed that “Iranian influence in Latin America and the Caribbean is waning.”

A U.S. military official told Breitbart News that the estimated 80-plus Shiite cultural centers backed by Iran are continuously multiplying, and are currently being operated by Hezbollah and Tehran’s Revolutionary Guards-Quds Force.

Should the United States allow Russia to take over the fight against ISIS and protect Syria, there will be no remnants for America to pick up.  Russia won’t just pick up their toys and go home once the deed is done, they will be embedded into the Middle East. And via the Russian prominence in the area, Iran will be freer to spread its mischief not only in the gulf area, but approaching America’s southern border as it works its way up Latin America.

Our allies and enemies need to understand what our objectives and policy is, where it is going, and believe that we will use our strength to protect those objectives.  Obama’s vacillating; lead from behind policy has led the Arab states to look at the U.S. under this President as weak and unsure. Trump’s Syrian comments seem like a continuation of that lead from behind strategy and a concession that the Russian/Iran alliance should control the Middle East. If the region ends up in the embrace of Russia, the United States will be worse off and the world will be a more dangerous place for decades to come.