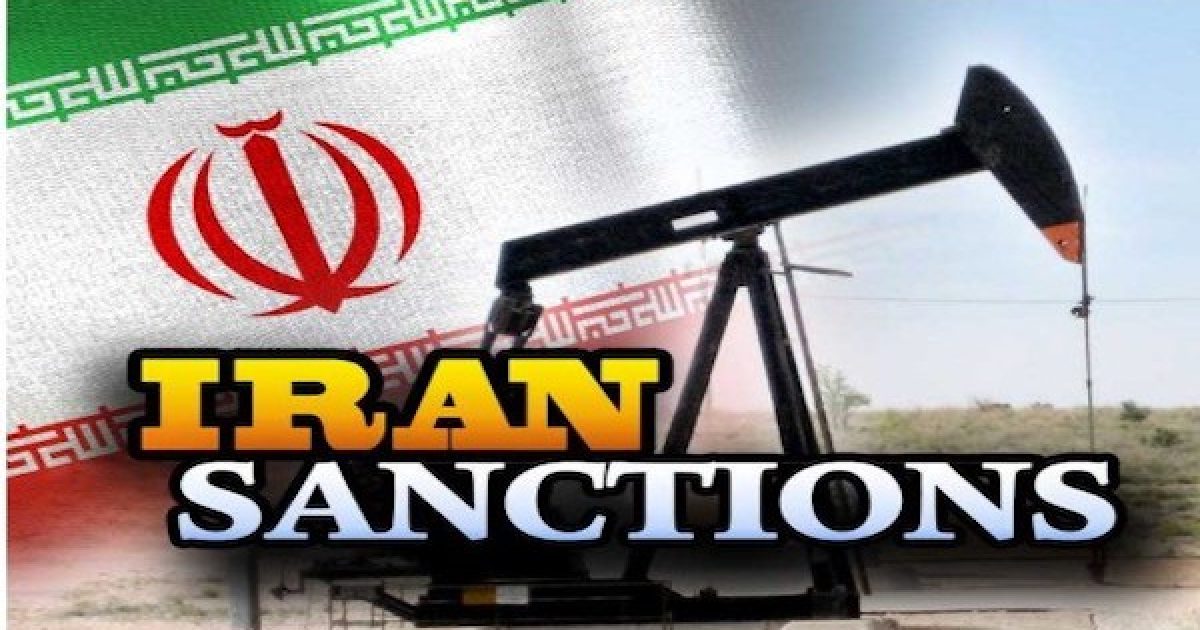 In May 2018 when President Trump pulled out of Obama’s horrible Iran deal and announced that America would be reimposing the U.S. sanctions against Iran that were in place before the JCPOA,  the liberals went crazy.  They claimed unless the U.S. was able to revive the UN sanctions against Iran also and get cooperation from the other P5+1 countries, the sanctions would have no effect.

However, the latest news from the rogue regime proves that the liberals have no idea what they were talking about, the reimposed sanctions are destroying the Iranian economy. The first round of sanctions limited Iran’s non-oil related business and was imposed on August 4th. The second round covered oil-related businesses and was effective on Nov. 4th.

Using figures released by the Iranian government, Radio Farda (the Persian language broadcaster of Radio Free Europe/Radio Liberty) reported Iran’s non-oil exports have halved since the US imposed its second round of sanctions on Nov. 4th

The country exported only $1.867 billion non-oil goods during November 21-December 22, less than half of Iran’s monthly average during the current fiscal year, which started on March 21, 2018.

The plunge in exports was partly due to a complete stoppage in ultra-light oil (gas condensate) sales, which Iran includes in non-oil export basket. The monthly gas condensate export has averaged at about $330 million, or only a seventh of the drop in total non-oil exports during November 21-December 22. 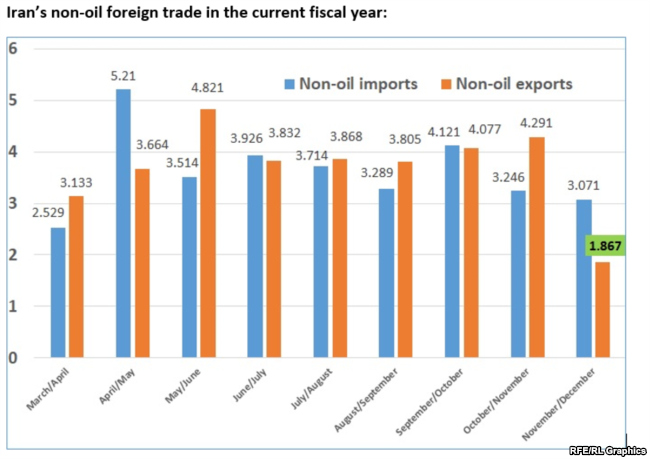 Iran’s oil exports are also down. When President announced America was leaving the JCPOA in May 2018, Iran was exporting about 2.4 million barrels of oil each day.  Six months later (November 2018) exports were down to 1.1 million barrels a day. The most significant drop began after the August sanctions which did not restrict their oil exports. The reason for the decline was the sanctions placed upon Iran’s oil insurance and shipping. Per the European Council on Foreign Relations:

Most of the oil shipped since then has gone through the National Iranian Tanker Company (NITC), even oil shipments to China. Lack of access to adequate insurance has increased the risk of shipping. Most tanker owners are either unwilling to rent their tankers for shipping Iranian oil cargoes or are demanding very high leasing premiums. Hence, importers are mostly relying on NITC to deliver their oil cargoes. This has also impacted on Iran’s refined petroleum products and petrochemical export. 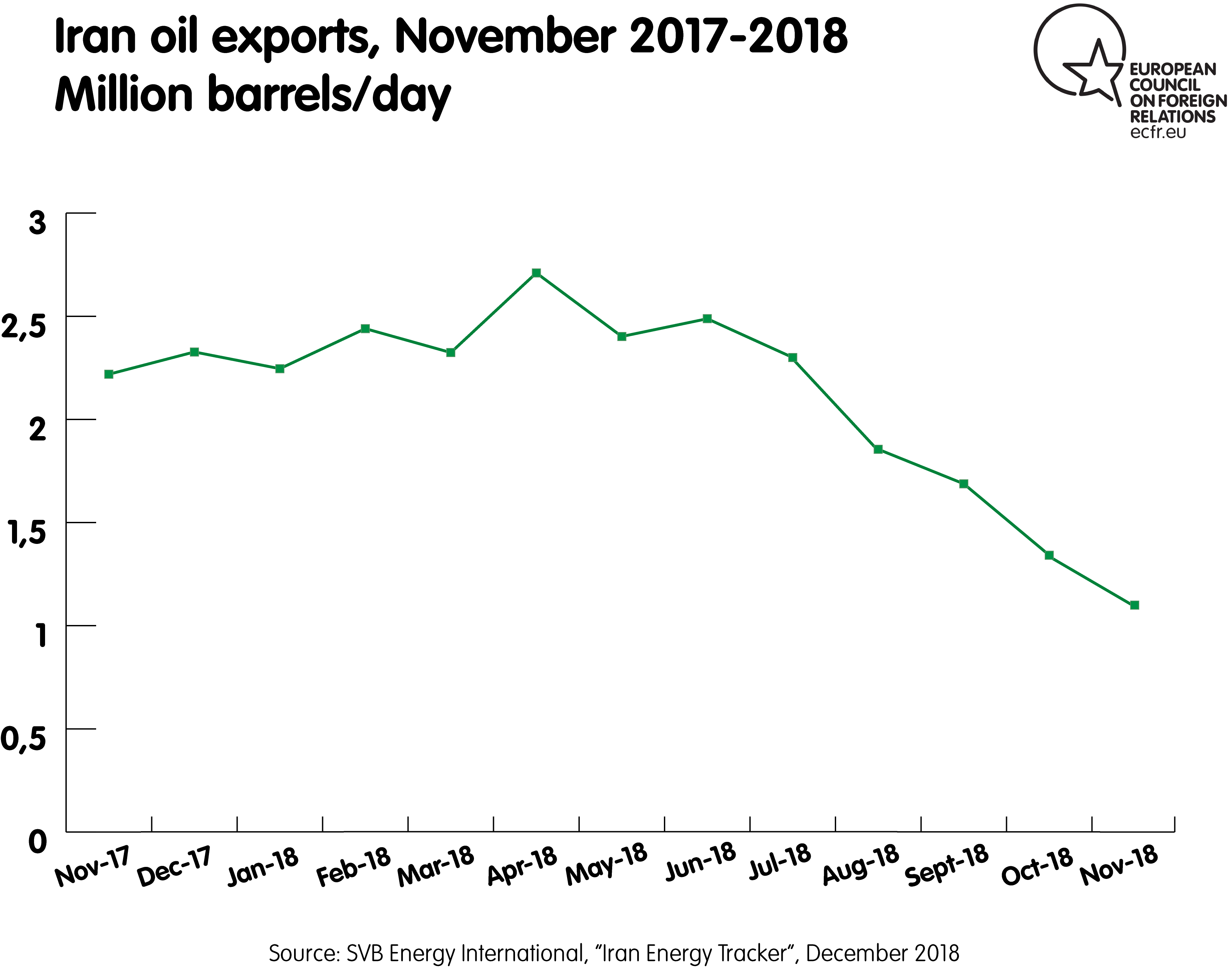 Overall the sanctions are having their desired effect. As reported by Al Bawaba, a Jordanian news service on Dec. 20th:

In the fallout, the Iranian rial has lost more than a quarter of its value against the dollar, sending the prices of food and other basic commodities soaring.

“The US sanctions on Iran are intended, as Secretary of State Mike Pompeo declared, to choke off funds that the regime uses to support its malign activities in the region,” said Dr Albadr Al-Shateri, politics professor at the National Defense College in Abu Dhabi.

Al-Shateri said: “The sanctions, despite their unilateral nature, have hurt Iran. Many companies that had planned to invest in Iran changed course, fearing US punitive sanctions.

“The Iranian currency plunged, unemployment is high and inflation is soaring. The International Monetary Fund points to declining growth due to the sanctions.”

Frustration at the declining economy has led to protests in Iran. “The policy … is clearly intended to clip Tehran’s wings and undermine its legitimacy,” said Al-Shateri.

“The regime in Tehran will use the sanctions as a rallying cry against Washington. But despite demonstrations against Iran’s government, a groundswell of support for regime change isn’t materializing.”

There you have it, imports and exports are down, the Iranian economy is starting to falter, and the Iranian people are not happy, and protests are breaking out. For example:

Dozens of Iranian retirees staged a protest Wednesday [Jan 2] in Tehran against what they describe as “inadequate” pensions, says Anadolu Agency. Protesters mostly retired teachers and nurses, gathered outside the capital’s parliament building. According to the Iranian Labor News Agency, demonstrators chanted slogans against rampant inflation, with some raising banners that read, “Apply the law; don’t discriminate against us.”

Pulling out of the flawed JCPOA Iran deal was an excellent foreign policy move by the President. The deal tied the hands of the United States more than it tied the hands of Iran. When provisions of the agreement expire in 2025 Iran will be able to produce nuclear weapons in 3-5 months. By reimposing the sanctions, President Trump has squeezed the regime’s wealth making it harder to spend money on destabilizing  Islamist terror groups and in the long term gives Iran a choice, give up on building atomic weapons or give up on having a viable economy.