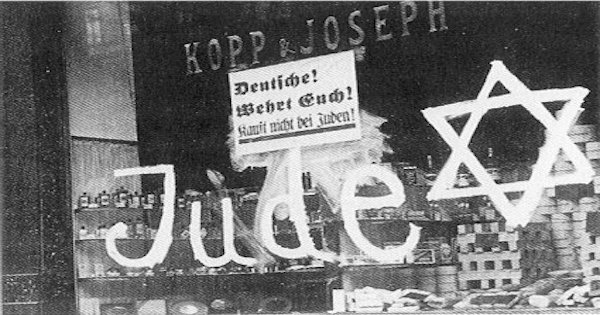 When first noticing the “de-Jewdification” of the Holocaust on Friday my initial reaction was that it must have been an accident. After all,  there was lots good things coming out of the nascent Trump Administration last week, it must have been a rush job and somebody screwed up.

That was until Hope Hicks a White House Spox announced:

Despite what the media reports, we are an incredibly inclusive group and we took into account all of those who suffered…it was our honor to issue a statement in remembrance of this important day.”

“The Nazis killed an astonishing number of people in monstrous ways and targeted certain groups—Gypsies, the mentally challenged, and open homosexuals, among others. But the Final Solution was aimed solely at the Jews. The Holocaust was about the Jews. There is no ‘proud’ way to offer a remembrance of the Holocaust that does not reflect that simple, awful, world-historical fact. To universalize it to “all those who suffered” is to scrub the Holocaust of its meaning.”

I don’t regret the words,” said Priebus. “Everyone’s suffering [in] the Holocaust, including obviously all of the Jewish people affected and miserable genocide that occurs — it’s something that we consider to be extraordinarily sad.” He went on to say, “If we could wipe [the Holocaust] off the history books, we would, but we can’t.

Sorry Reince, but as the late great Elie Wiesel used to say, “while not all victims were Jews, all Jews were victims.

On Monday Press Secretary Sean Spicer had a go at it and seemed to get angry when reminded that even the Republican Jewish Coalition criticized the President for the Judenrein Holocaust statement. Spicer lashed out. He explained that Trump’s record of defending Israel speaks for his allegiance to the Jewish people.

“It is pathetic that people are picking on his statement. I mean, the idea that you’re nitpicking a statement that sought to remember this tragic event that occurred, and the people who died in it, is just ridiculous. I think he acknowledged the suffering that existed and wants to make sure that it’s enshrined in the American people’s memory, so that something like this never ever happens again.”

Nobody was suggesting that President Trump wasn’t a strong supporter of Israel and the Jewish people in general. To be quite honest, most Jews, especially politically conservative ones (like yours truly) really appreciate his support. Support that is even more dramatic when one considers the past eight years of the anti-Semitic Barack Obama, and the possibility that it could have been followed up with eight years of the anti-Israel Hillary Clinton.

As much as that support is appreciated, it does not mean the Trump Administration, shouldn’t  be criticized when he (or his staff) takes an action, or releases a statement that is just plain wrong and spends the next three days doubling down trying to prove the statement correct. Despite what Sean Spicer hinted,  criticizing the administration for their mistake does not make me an ingrate “picking on the statement.”

I supported Donald Trump for a host of politically conservative reasons as well the fact that he is a supporter of Jewish causes, and I have the right to criticize him on the Jewish, Supreme Court, Immigration, taxes or any of the other reasons I voted for him. Spicer is out of line when he uses Trump’s support of Jewish causes as an excuse for the Holocaust stupidity.

I am disappointed that Jared Kushner whose grandparents are Holocaust survivors, hasn’t chimed in since Friday’s statement was made ( although there are some who believe he wrote or approved the statement).

What Spicer and the administration does not understand is Jew-less statement feeds into the Holocaust revisionism which denies the uniqueness of the Holocaust and the Jews being singled out for extermination. Today all across the world Holocaust deniers and European nationalists seek to downplay the fact that the Jews were targeted for genocide, and try to focus on the suffering of non-Jewish Poles, Lithuanians, Germans, French and others and the Jews were just another group.

Of course, there was suffering and heroism of non-Jews during the Holocaust. But only the Jews were singled out for complete annihilation as a race worldwide by the Nazis. Hitler placed the genocide of the Jewish people throughout the world as a central goal the Third Reich. It was right up there with conquering the world, and creating a pure Arian race

I am not suggesting that the administration was purposely trying to feed Holocaust revisionism, but that will be the result of the error.

The Trump Administration Statement on Holocaust Memorial Day, displayed a total lack of understanding of this horrible period in history and how haters have been trying to separate the Jewish people from the Holocaust.  The doubling down of by members of the administration, made it even worse–and the fact that the Trump Administration is very supportive of Israel and the Jewish people is appreciated— but it does not correct the error.