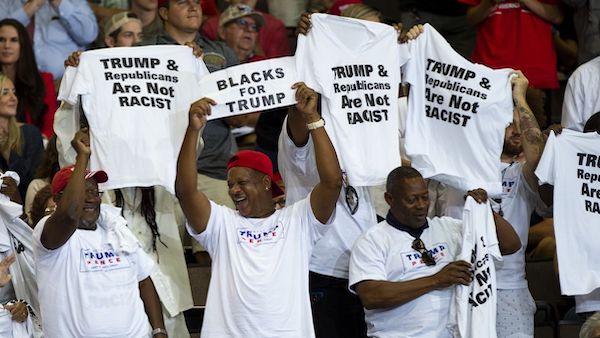 Democrats are getting nervous. Not only are polls showing signs of a shift of some African-American vote toward Trump, but he is actually campaigning toward black voters. After years of the Democrats counting on their votes and then ignoring them post-election, Blacks and other people of color see this president delivering on kitchen table issues for all Americans. Trump’s Growing African-American Appeal

According to the Washington Times, Brewer, who played his five-year career with the Vikings, Giants, Eagles, and Cardinals, believes the black community is going to abandon the Democrat party at heretofore unheard-of levels.

“There is an awakening going on right now in the country,” he claimed. “I’m going to take the guy who’s actually putting in the policies that are going to make life better for my young black son and my young black daughter, versus somebody who gives me lip service — like, unfortunately, the Democrats have done for our community for years.”

How significant will the exodus be?

President Trump won 8 percent of the black vote in 2016, a slight jump from the 6 percent Republican Mitt Romney garnered in 2012.

“Donald Trump will get over 20% of the black vote,” Brewer declared.

Now that would be cool and well deserved. Remember what the president said to the African American audience in 2016? “What the hell do you have to lose? Black unemployment is the lowest in history. He backed his words with policies that work.

Brewer believes such a high percentage of black voters will help carry the President, whom the media has perpetually vilified as a racist for three years now, to victory.

“That is what’s going to win the election,” he predicted. “Why? Because there hasn’t been a Republican to even try to go in and talk to the black community. They don’t go there. They don’t even try. I think he’s trying, finally.”

Last year, the President signed an executive order that prioritized Historically Black Colleges and Universities, providing a boost to schools that the Obama administration had neglected.

Brewer, a lifelong Democrat who once raised campaign funds for Barack Obama, also believes Trump, before his run in 2016, was considered a “badass” and “icon in the black community.”

A poll released earlier this month by Emerson had President Trump’s approval at a massive 35 percent. A pair of other surveys had less, but still impressive numbers.

The new Emerson poll puts Trump at 35 percent with black voters and 38 percent with Hispanics. “If you add in Asian voters at 28 percent approval,” notes Emerson’s director of polling Spencer Kimball, “our number is very close to the new Marist poll,” which finds Trump’s approval at 33 percent among non-white voters.  A recent RasmussenReports poll has Trump support among black voters at 34 percent, and even the new CNN poll has Trump’s approval among non-white voters at 26 percent.

Trump, himself a social media giant, also has hip hop artist Kanye and his millions of followers in his corner.

The President isn’t shying away from courting the black community, either.

The president’s reelection campaign has spent $1 million in an effort to make inroads with black voters, and more is coming, according to a person with direct knowledge of the planning. The initiative, dubbed “Black Voices” by the campaign, so far has included ads in black-run newspapers and on radio stations, volunteer training seminars and a kickoff event hosted by Trump in Atlanta last month

The spots, which encourage voters to sign up for Trump 2020 updates by texting “Woke” to a campaign phone number, are concentrated in big cities located in battleground states, including Philadelphia, Detroit and Atlanta.

Will President Trump earn 30% of the Black vote in 2020? There’s a better chance of Nancy Pelosi switching parties, or the NY Jets winning the Super Bowl in six weeks, than Donald Trump getting 30% of the African American vote in 2020.  Trump got 8% of the African-American vote in 2016, which was a “yuge” improvement over Mitt Romney’s 6 percent in 2012 and John McCain’s 4 percent in 2008.

However even a more reasonable gain of a few percentage points will help the president lock down some of the swing states with large urban markets that he won in 2016, and possibly add one or two of the ones he lost by tiny margins.

Below is the video of President Trump opening the “Black Voices for Trump” effort in Atlanta: