Trump Unshaken As He Banters With Press on Air Force One 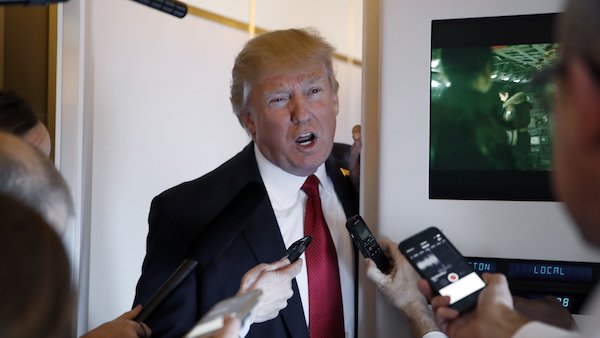 The mainstream press has been undeniably difficult to deal with for the Trump administration, who are facing new allegations of wrongdoing during the 2016 presidential election stemming from a meeting between a Russian lawyer and Donald Trump Jr.  The meeting, which was allowed to occur only after former President Barack Obama’s DOJ allowed the lawyer to enter the country on a special access pass, has been the subject of countless hours of democratic banter and fake news scrutiny, even though there has been no evidence of any wrongdoing so dar.

This incident comes as a renewed call for impeachment by congressional democrats has reached the floor of congress, just before Vice President Mike Pence looked to be bolstering his own political team in anticipation of a possible stint as Commander in Chief.

Somehow this hasn’t much phased President Donald Trump, who was jovial and pleasant with reporters on Air Force One this week.

“The Donald J. Trump who turned up in the press cabin of Air Force One on Wednesday evening, as his plane crossed the Atlantic Ocean on the way to Paris, was starkly different from the one who publicly pillories the news media but surprisingly familiar to reporters who know him well.

“The president had taken off his tie but kept on his jacket — a wardrobe change that for him qualifies as casual Friday — and he was in a happy-hour frame of mind. Expansive, engaging, even at times ebullient, Mr. Trump held forth for an hour, addressing reporters by name and alighting on topics as different as Chinese history and Julius and Ethel Rosenberg.

“It was a loose, good-humored side of Mr. Trump that the public rarely sees amid the fusillade of angry speeches and venomous tweets that have characterized the president’s first six months in the White House. And it came to light only because he retroactively put the session on the record, asking a reporter the next morning why she had not quoted his remarks.

“White House aides say they see more of this side in the Oval Office, where the president has debated advisers about issues like sending more troops to Afghanistan. Diplomats say their bosses see more of it in meetings, where Mr. Trump has engaged even those who are deeply skeptical of his views, like Chancellor Angela Merkel of Germany.”

The unflappable Trump has returned.

Trump has built a great deal of confidence in himself by showing his own brand of calm and collected character.  Sure, the media circus surrounding has presidency has cause moments of shaky exchanges and over-the-top rhetoric, but the President is a businessman who knows what it takes to please your investors.  In this case, those investors are the voters of America, and his confidence in the face of a rabid and rhetoric-heavy press hellbent on destroying him is a sure sign of resolve.