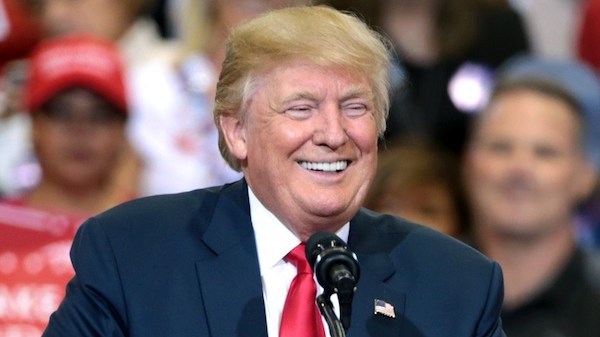 At his Michigan rally on Nancy’s big night with the gavel, Trump said he didn’t feel like he was impeached. Why not? Because he’s so busy winning! Here are some examples: Trump scored yuge wins

He’s been too busy Making America Great and (as an added bonus) reducing the Obama legacy to ashes.

The Economy, his chief election promise, is unstoppable.

Just this week, the DOW just crossed 10,000 points of growth since his election.

“The rally has been driven by pro-growth measures, de-escalation of trade tensions, huge liquidity injections by central banks and a FOMO approach by investors worried about missing out on a remarkable U.S. market outperformance that has set one record high after the other.” Mohamed El-Arian, chief economic adviser at Allianz, told FOX Business. — FoxBusiness

The Pulitzer people should ask Paul Krugman for their prize back.

Here’s where markets stood as of Thursday close:

They broke new records again the next day.

The 2-1 decision by the 5th US Circuit Court of Appeals likely pushes any Supreme Court action on Obamacare until after the 2020 election but again thrusts the issue of health care into the forefront of the campaign — and extends the uncertainty surrounding the future of the landmark law, long a political target for President Donald Trump and other Republicans.

The challenge was brought by Texas and a coalition of Republican states after a failed 2017 congressional repeal effort, then later joined by the Trump administration — which, in a dramatic reversal from its earlier position, argued the entire law should be thrown out. “Let the courts do their job,” Attorney General William Barr told Congress earlier this year.

…The court case is part of what once was considered a long-shot attempt to gut the Affordable Care Act. But two courts have now sided with the argument that a key part of Obamacare — the individual mandate requiring Americans to purchase health insurance — is no longer constitutional. — Source: CNN

Speaking of the courts…

187 of Trump’s judicial nominees have been confirmed as of December 20, while just 124 of Obama’s nominees were confirmed in his eight years.

In the last two years of the Obama administration, the president was only able to confirm two appellate court judges and 18 district court judges

One-fifth of judges on the federal courts — and one-fourth on the appeals courts — are Trump appointees.
Trump has added 50 new judges to the appellate courts. By comparison, Obama added a total of 55.

The majority of circuit courts — seven of twelve — now have conservative majorities and the ideological balance of the Supreme Court has tipped in the conservative direction as a result of Trump’s nominees.

Dems have overplayed their hand. Polls show early support for Impeachment has not only lost ground but has flipped against it.

Even The Washington Post acknowledged that polls in battleground states show that support for impeaching the president is lower than in national polls. They looked at polls in Arizona, Florida, Michigan, Pennsylvania, Nevada, New Hampshire, North Carolina and Wisconsin and found, on average, that 51 percent of those surveyed opposed impeachment with 44 percent supporting it. The average in national polls shows that 43 percent oppose impeachment while 47 percent support it.
Source: WashingtonTimes

The U.S. and China are arranging the formal signing of the first phase of a broader trade deal between the world’s two biggest economies, President Donald Trump said after discussions between him and his counterpart, Xi Jinping.

The House of Representatives on Thursday passed President Donald Trump’s revised North American Free Trade Agreement, with members sending Trump’s foremost legislative priority — just a day after the divided chamber took the historic vote to impeach him — to the Senate.

Trump’s trade deal is one step closer to ratification after more than a year of negotiations between his administration and House Democrats, passing with an overwhelmingly bipartisan vote of 385-41.
About three dozen Democrats voted against the deal, along with only two Republicans — Reps. Thomas Massie and Ted Yoho.
Source: CNN

During the signing ceremony, Trump appointed Gen. Jay Raymond as the first Chief of Space Operations. Raymond, who also leads U.S. Space Command, will report to the secretary of the Air Force and sit as a member of the Joint Chiefs of Staff.
Read more: Military

“Just so you’re aware,” said Gen. Scott Miller as he stood beside Esper in Kabul Oct. 21, “as we work in Afghanistan with our partners, we’re always looking to optimize the force. And unbeknownst to the public, as part of our optimization over the last year … we’ve reduced our authorized strength by 2,000 here.”

And to top it all off, the do-nothing Democrats lived up to their name impeachment flamed out by sitting on Pelosi’s desk instead of heading over to the Senate.