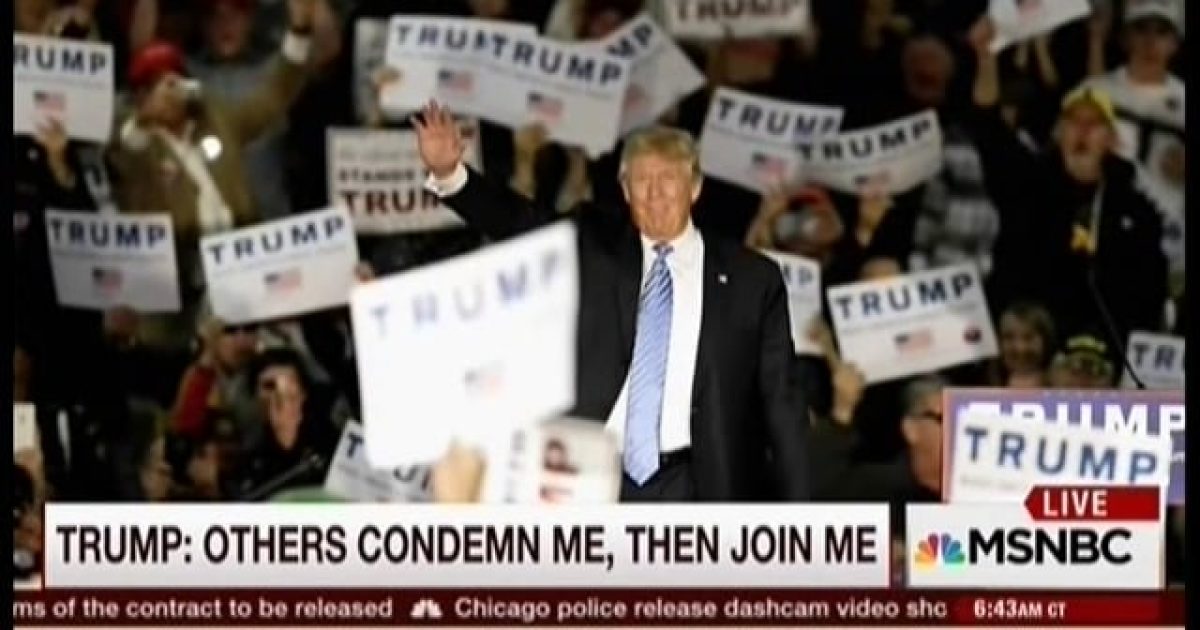 Donald Trump had a rocky appearance on MSNBC’s  Morning Joe Tuesday to talk about his statement made the day before proposing a temporary ban of allowing Muslims into the United States. Temporarily, he suggested, until congress figured out what to do. He contended that his proposed ban was just like FDR’s WWII proclamations that led to the Japanese interment camps, but was quick to point out that he wasn’t suggesting modern-day internment camps.

The interview started out a bit rough, simply because Trump wouldn’t take a break and allow the hosts to ask a question, until Scarborough told the GOP candidate if he didn’t stop they would go to break. Trump told him to go ahead and take a break. So not intimidated thats exactly what Scarborough did.

After a few commercials things calmed down and Trump answered more questions(video is below).  Scarborough asked, “Isn’t it counter productive and unconstitutional to have this broad approach to all Muslim? ”

Trump: It’s not unconstitutional keeping people out, freeze warningly until we get a hold of what’s going on, Joe. Then you look at Franklin roast, a respected president, highly respected, take a look at presidential proclamations back a long time ago, 2525, 2526 and 2527  what he was doing with Germans, Italians and Japanese. He had to do it. Look, we’re at war with radical Islam. We’re at war.
Scarborough: I agree with that, Donald.
Trump: Right.
Scarborough: You certainly aren’t proposing internment camps.
Trump: Not at all. I’m not proposing that and that’s not what this — you have to look at his presidential proclamations. It was tough stuff. It wasn’t internment. We’re not talking about Japanese internment camps no not at all. We have to get a hand around a very serious problem. It’s getting worse. You’ll have more world trade centers if we don’t toughen up, smarten up and use our heads.

These proclamations led to one of the most horrible episodes in American history, when we rounded up people of Japanese ancestry who lived on the Pacific coast, and forced them into in camps. Sixty-two percent of the internees were United States citizens.

FDR’s proclamations didn’t order the internment camps (the executive order that went with them did), but it did allow American citizens and resident aliens of Japanese heritage as well as resident aliens of German and Italian ancestry to be apprehended, restrained, or removed from the United States without due process.  The vast majority of these people were proud Americans who did nothing wrong.  As reported here before, at the same time Roosevelt tried to limit the number of Jews entering the country (because he felt the country already had enough Jews).

Trump correctly contends that we are at war today, the same as when Roosevelt wrote those three proclamations. I would even add that Americans today are in greater danger of being attacked at home than they were during WWII.  Americans have a legitimate fear of being blown into little pieces by a radical Islamist terrorist, one of the issues with Obama’s approach is that he doesn’t recognize that fear as legitimate.

Examining the history of this great nation it is clear that one reason for its creation was to protect religious liberty. Two weeks ago we celebrated  Thanksgiving, first celebrated by the Pilgrims, who were fleeing religious persecution. William Penn came to the new world and founded what was to become the state of Pennsylvania because Quakers were persecuted (of course it was a screw up because with Pennsylvania came the Philadelphia Eagles fans). And we all know about Peter Stuyvesant’s religious intolerance in New York, and were taught in social studies clases that his downfall was a good thing. There are countless other examples of America’s arms opening to welcome people looking for religious freedom. Changing it now, even temporarily would be destroying a part of American heritage. In my own family, my dad told me the story of his grandparents and their children running across roofs in Odessa, Russia fleeing the Cossacks and another anti-Semitic pogrom, they escaped to the United States where they were welcomed.

Trump is simply wrong. This is not to say that we should grant anyone who wants to come here free entry into the country. In these unsafe times, our government must set up safeguards before we allow anybody into the country (of any faith), and to track them when they come into the country (all of them).
From a practical sense does Mr. Trump really believe that a radical Muslim trying to sneak into the county will identify as a Muslim? Or will they just say they are of a different faith.  So in the end, Trump’s proposal won’t even accomplish what he wants it to accomplish. Unless of course his goal is to take the national security heat off of Obama and Hillary.

MJ-2-8 from Jeffrey Dunetz on Vimeo.

Biden And Harris Are Giving Bizarre Mixed Messages On Vaccinations And Masks
May 6th, 2021 The Lid