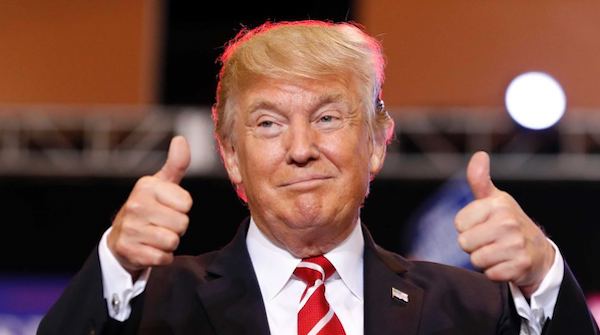 A unanimous ruling by a three-judge panel in the Second Circuit Court of Appeals was a slap-down of sanctuary policies in New York City and seven states including Washington and is being called a “major victory” for President Donald Trump by the Washington Times. The DOJ can withhold law enforcement grants from sanctuary states, ones that refuse to give federal immigration authorities access to jails and provide advance notice when someone in the country illegally is about to be released from their prisons. Trump sanctuary win

According to the Associated Press and Seattle P-I.com, “The Trump administration can withhold millions of dollars in law enforcement grants to force states to cooperate with U.S. immigration enforcement” as a result of the ruling. This could set the stage for a Supreme Court showdown because three other federal appeals courts have ruled the opposite way. Trump sanctuary win

The Hill reported that the ruling reversed “a district court judge’s ruling that the department lacked the authority to impose immigration-related conditions on certain funding.” The district court’s ruling was reversed and remanded with these instructions:

a. with directions that it enter partial summary judgment in favor of defendants on plaintiffs’ challenge to the three immigration‐related conditions imposed on 2017 Byrne Program grants; and

b. insofar as there remains pending in the district court plaintiffs’ challenge to conditions imposed by defendants on 2018 Byrne Program grants, for further proceedings consistent with this opinion.

Washington State Attorney General Bob Ferguson joined attorneys general in New York, Connecticut, New Jersey, Rhode Island, Massachusetts, and Virginia in 2017 to sue the Trump administration—one of more than 50 lawsuits against President Trump and his Administration involving or filed by Ferguson—over withholding money from states with so-called “sanctuary” policies. The money comes from the Byrne Justice Assistance Grant fund. The Washington Times noted, “the Obama administration began to take similar steps at the end of its tenure.”

The ruling comes in the wake of a Trump administration lawsuit against the State of New Jersey and King County, Washington, over policies adopted in both jurisdictions that “flout” federal immigration law. The president has described “sanctuary” policies as a “tremendous problem,” according to NBC News.

In a statement, the Department said, “Today’s decision rightfully recognizes the lawful authority of the Attorney General to ensure that Department of Justice grant recipients is not at the same time thwarting federal law enforcement priorities… All Americans will benefit from increased public safety as this Administration can implement its lawful immigration and public safety policies.”

As noted by The Hill, at the time the lawsuit was filed nearly three years ago, then-Attorney General Jeff Sessions observed, “So-called ‘sanctuary’ policies make all of us less safe because they intentionally undermine our laws and protect illegal aliens who have committed crimes. These policies also encourage illegal immigration and even human trafficking by perpetuating the lie that in certain cities, illegal aliens can live outside the law.”

Critics of “sanctuary cities,” including the president contend they protect criminals from prosecution and deportation for being in this country illegally.

As recalled by Fox News, the president raised liberal hackles when he said, during the State of the Union address, “Not one more American life should be stolen by sanctuary cities; they’re all over the place, and a lot of people don’t want them.”