Not All Trump Supporters Think He Should Run In 2024 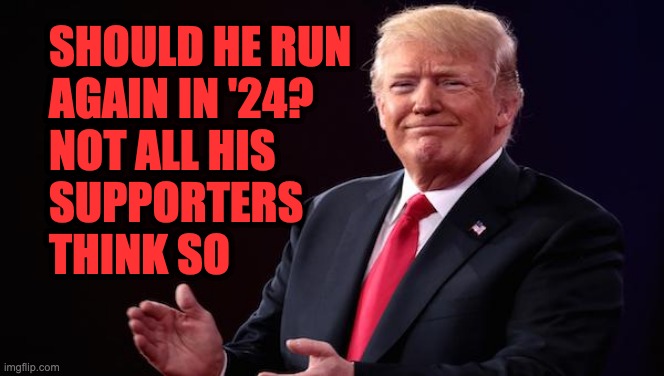 In many ways, Donald Trump’s legacy will be cemented depending on whether or not he runs for president in 2024. With this crucial decision, he can leave the Republican Party surging or divided.

While the former president had many successful policies and made inroads with some key voter blocs — mainly Hispanic and blue-collar — his deficiencies wasted some, too.

I believe the best way for the party to build on those gains is to move on.

Though the GOP recently lost control of the U.S. Senate and the White House, overall results also showed the party continues to have strong appeal, with broad and surprising success last fall in House elections.

The GOP losses of House seats in 2018, Trump’s 2020 defeat, and Senate setbacks in Arizona, Colorado, and Georgia, were mainly due to America’s suburbs becoming more diverse and secular. While some of these voters gave Trump a chance in 2016, and plenty still vote Republican at the congressional level, many rejected the 45th president in November.

Trump’s job approval never rose above 50% in most polls because he consistently catered to his base rather than pursuing swing voters and independents.

Trump’s demand for fealty could dangerously split the party because he seemingly regards a lack of willingness to defend him as unforgivable. In a presidential primary, Trump would likely attack the strong records of governors like Ron DeSantis and others who have been very good to him the last few years.

A less volatile 2024 nominee could strengthen the party and stop the suburban hemorrhaging. A Trump presidential candidacy would instead augment a division that is preventable.

The former president’s behavior since the November election has been troubling. After his lawsuits failed, he pressured state officials, his Justice Department, and state Republican parties to “find the fraud” and overturn the results. Trump continues to insist he won, endorsing “vote audits” in Arizona and Georgia.

Instead of looking backward, delaying up-and-coming talent, the party ought to unite its wings behind an array of successful politicians.

At age 78 by 2024, Trump would also negate any large age advantage Republicans hold over the 82-year-old Biden.

Even some of his most traditional allies realize it’s probably time.

In interviews with 15 people at the recent Family Leadership Summit in Iowa, evangelicals — all of whom voted for Trump — none said they hoped the former president would run again.

The opinions expressed above are those of the author. It is one of many valid conservative positions on this issue but might or might not reflect the opinion of The Lid.