The Trump/Bibi Presser, The US/Israel Friendship is BACK! 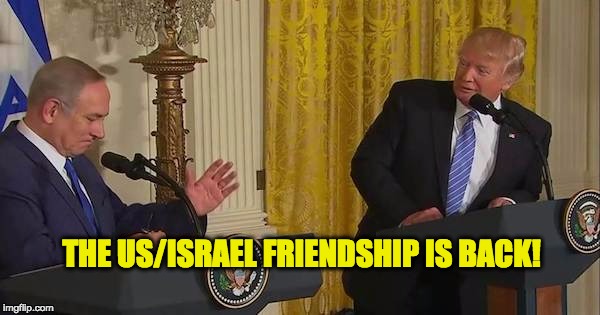 At least the mainstream media is consistent, it has absolutely no idea what is happening with regards to the Middle East. President Trump and Israeli Premier Netanyahu held a joint press conference on Wednesday and throw away what you may have heard from the MSM because they emphasized the wrong things and got some points wrong, all because neither the American President nor the Israeli Prime Minister are liked by the liberal media.

Most missed was the different approach to US/Israeli relations and the Middle East peace process revealed during the press conference.

Despite what you may have heard or read from the MSM President Trump did not abandon the  “two-state-solution.”  What the President dropped was the Obama position which was articulated by Susan Rice,  “even if Israel and the Palestinians reach an agreement, it is possible that the United States would oppose it.”  The position Trump stated was we will support whatever the Israelis and Palestinians come up with.

During the presser the president was asked if he supports the two-state solution, he answered:

I thought for a while the two-state looked like it may be the easier of the two.  But honestly, if Bibi and if the Palestinians — if Israel and the Palestinians are happy, I’m happy with the one they like the best.

One could not help but notice during the press conference that the two genuinely like each other, For one thing  the POTUS allowed the Prime Minister to enter and leave through the front door of the White House. Even when the president seemingly tried to  pressure Israel it was done in a jovial way; as in this exchange:

Trump: As far as settlements, (turns to Netanyahu) I’d like to see you hold back on settlements for a little bit.  We’ll work something out.  But I would like to see a deal be made.  I think a deal will be made.  I know that every President would like to.  Most of them have not started until late because they never thought it was possible.  And it wasn’t possible because they didn’t do it.

But Bibi and I have known each other a long time — a smart man, great negotiator.  And I think we’re going to make a deal.  It might be a bigger and better deal than people in this room even understand.  That’s a possibility.  So let’s see what we do.

Two important things to understand about this exchange.  Firstly the “I’d like to see you hold back on settlements for a little bit.” was pre-planned. Not necessarily the exact verbiage but it was no surprise to the Israeli PM. It was very obvious that the two had discussed the content of their remarks before the press conference. This is normally done when a president meets a foreign leader, but according to former Israeli ambassador to the US, it was something Obama didn’t do with Netanyahu.

The second point about the exchange is that it wasn’t done to push Bibi it was made to help him. Netanyahu is walking a fine line back home. Some of the parties in his coalition government feel very strongly about the need to build brand new settlement communities on new land. Trump’s comment gave the Prime Minister some cover, not to expand territory as some would like.

Revealed at the conference was a real change in strategy not involving a one, two (or 3) state solution. According to Netanyahu (and confirmed by President Trump) they are going to take more of a regional approach to peace negotiations.

I believe that the great opportunity for peace comes from a regional approach from involving our newfound Arab partners in the pursuit of a broader peace and peace with the Palestinians.

If the regional approach ends up working, President Obama and his romance with Iran will deserve some credit. Iran is the most powerful of the Shia Muslim states. Along with Israel Iran hates Saudi Arabia the leader of the Sunni Muslim states. Therefore the Saudis and some of the Sunni states have been working with Israel to protect themselves against Iranian aggression. This is not even close to being a public alliance, that would incite riots in the Muslim states, but it is there nevertheless.

Also at the press conference President Trump officially walked back from his promise to move the American Embassy from Tel Aviv to Jerusalem saying:

Ultimately Wednesday’s press conference signalled a giant step away from the Barack Obama/Clinton/Kerry administration hostile to the Jewish State. The genuine friendship between the President and Prime Minister, makes the remote chance of peace just a little less remote, as there is a trust which may enable them to take chances, impossible to take amid the distrustful attitude generated during the “bad old days” of the previous administration.

None of this means there wont be rough spots in the relationship despite their friendship. Both leaders believe in putting the needs of their country first (as it should be) and both are used to being the “alpha dog.” However what their relationship means is it will be much easier to repair their disagreements than was possible during the Obama tenure.

Interestingly some of the most leftist elements of “Jewish Leadership” are upset about the press conference. For example the Reform Movement’s Rabbi Rick Jacobs said he views Trump’s statements as “an abdication of the longtime, bipartisan support for a two-state solution.” The one state possibility discussed “is potentially devastating to the prospects for peace and Israel’s Jewish, democratic future. Prime Minister Netanyahu’s endorsement of such a policy change is no less ill-advised,” wrote Jacobs in a statement from the Union for Reform Judaism, which he heads.

Keep in mind from a theological stand point reform Jewry doesn’t have the same connection to Israel as the conservative and orthodox movements. Reform does not believe in an eventual ingathering of all Jews to the Holy Land as the other two flavors of the faith. This leads to a difference in practice and attitude toward Israel. For example when Jews pray they face Jerusalem, but this is not necessarily the practice with Reform Jewry.  The reform prayerbooks have taken out references to the eventual rebuilding of the holy temple in Jerusalem.  And until 1937, advocated against the creation of the Jewish state. What the difference of theology leads to is Reform Jewry looks as Israel as a heritage site–kind of a Jewish Museum the size of New Jersey while the other branches look at her as a place where one day God will call them or their decedents to move back home and live in Israel.

The last questioner asked about an uptick in anti-Semitism in the U.S., Trump’s answer okay political tap dancing but not to the liking of some liberals:

I think one of the reasons I won the election is we have a very, very divided nation.  Very divided.  And, hopefully, I’ll be able to do something about that.  And, you know, it was something that was very important to me.

Congressman Nadler (D-NY) had an issue with the way Trump answered that question about anti-Semitism. He tweeted:

Nadler: Trump ‘Can’t Hide’ behind Netanyahu on Anti-Semitism from @J_Insiderhttps://t.co/HRxMDw8roQ

That’s a strong statement from a man who abandoned Israel and publicly endorsed President Obama’s lousy Iran deal. He became the example for Obama to say things like–see…Nadler’s Jewish and supports the deal.

There was also a bad reaction from the ADL, however keep in mind that over the past thirty years, the Anti-Defamation League lost its Jewish Identity and has become simply another arm of the progressive wing of the Democratic Party.

“His response was baffling,” Anti-Defamation League CEO Jonathan Greenblatt told Haaretz.  The issue “is not electoral votes. It’s about the wave of hate crimes since the election and the spike in anti-Semitism across the country,” he said. “President Trump seemed uninformed about this issue and missed an opportunity to decry the rhetoric of hate that seems to be surging online and in the real world.  Intentional or not, this emboldens anti-Semites.”

Most of the negative reaction from the most liberal of Jewish groups have more to do with the fact that Donald Trump is president than what was actually said or done at the news conference.

Perhaps the most gratifying was when President Trump put his hand on Netanyahu’s back to lead him into the White House there was no knife in his other hand, ready to figuratively stab his strong ally in the back.

Below is a video of the entire President Trump, Prime Minister Netanyahu press conference: