For Party’s Sake, Trump Must Wait Until After Midterms To Declare Intentions 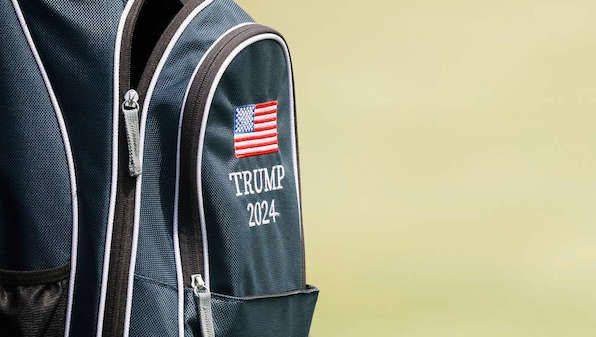 Trump must wait until after midterms

On Thursday, Eric Trump used a golf bag featuring Trump 2024″ lettering under an American flag patch during a tournament at his father’s New Jersey club.

It’s no secret the former president is eager to launch another bid for the Oval Office; many Republicans agree that’s fine, but most everyone also agrees — including the man who will likely be the next Speaker of the House — it would be selfish and disastrous for Trump to announce before this autumn’s crucial midterm elections.

During a recent speech in Arizona, Trump teased another campaign run but thankfully indicated he’d perhaps wait until after November.

“And now, we may have to do it again,” Trump said. “I mean, look at—look at what has happened to our country and less than two years. Our country is like a different—it’s like a different place. It’s so sad to see. But first, we have to win a historic victory for the Republican Party this November when we retake Congress among our highest priorities must be to end the nightmare Joe Biden has created on our southern border.”

Republicans are favored to reclaim the U.S. House in November, according to FiveThirtyEight, while U.S. Senate control remains a toss-up.

Should they take either chamber of Congress, the GOP can stymie most of President Joe Biden’s agenda for two years leading up to the 2024 election.

If Trump were to announce a third presidential bid before the midterms, his decision would be a gift and undeniably a major rally point for Democrats.

I’d muse that Biden, whose age and unpopularity make it very unlikely he would run for re-election, would only take the presidential plunge at age 82 if Trump, at 78, also runs. Biden’s seemingly been goading the former president in recent remarks. The current president is historically disliked yet still beats Trump in several head-to-head polls.

While some polls show Trump as the preferred option for the 2024 nomination among Republicans, his prospects have faded a bit as the Select Committee investigating January 6 dents some support.

A Reuters poll from last week showed that one-third of Republicans strongly or somewhat agreed that Trump should not run again in 2024.

Any sane observer realizes that if Trump announces before November 8, the only issue discussed will be “orange man bad,” and the media would ignore Biden and Democrats’ foibles to instead talk incessantly about the 2020 election and January 6 riots.

I prefer to allow Republican candidates to make their campaigns about important issues and ongoing disasters created by the current administration, including:

Is keeping midterm voters’ attention on Biden’s failures too much to ask?

Trump must wait until after midterms
https://lidblog.com/