Trump: When ‘The Lesser Of Two Evils’ Actually Does Great Things 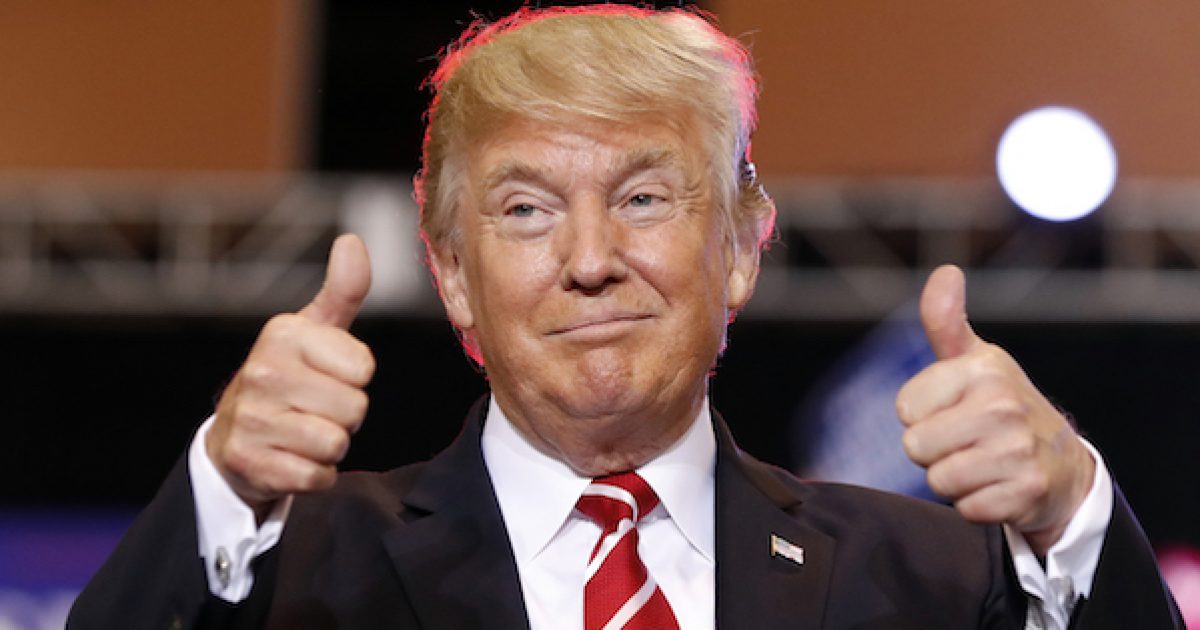 A dear friend, also a Christian, still rants about how wrong it was for anyone to vote for Donald Trump.

I recently addressed his best arguments against voting for the “lesser evil,” which I did last year:

Hillary would have murdered additional millions of babies in the womb, just look at who she would have put on the Supreme Court. Trump not only prevented that, he placed an aggressively pro-life justice on the court. And likely 2 or 3 more to come. If you can’t see that guarantees protecting lives rather than murdering them, you need to revisit the issue.

If y’all are keeping score, that’s millions or so innocent lives saved. That ought to be enough in itself to justify voting for Trump.

I don’t add up what Trump hasn’t accomplished yet. He’s been in office only 10 months. But if you really doubt his effect for good in that short time, there’s a list of 150 accomplishments that not only stopped or reversed horrid adverse leftist agendas, but advanced conservative ones in their place. That’s a 180-degree reversal on each of 150 issues. That’s also 150 to none on the scorecard. (You can find that list, growing every day, by googling for “Thank President Trump for his first-year accomplishments.”)

Your complaint is that Trump hasn’t done much. You’ve been misled by watching network TV. See the millions of lives saved and the 150 items above. Your fallback complaint is that he’s not nice. Jimmy Carter was nice. Nice is irrelevant. He’s chasing the RINOs out of office and making “true” conservatives put their votes where their campaign talk has been.

Yeah, his style is rude, crude and clumsy, to say nothing about childish. But we’ve tried polite, considerate and grownup and guess what – that’s what got the country where it was a year ago. I don’t much care how crude and clumsy he is as long as he continues on the trajectory he’s charted: millions of babies saved and 150 victories in 10 months. He’s not my pastor. He’s my mechanic.

Incidentally, did it occur to you that Trump’s outrageousness may be well-calculated and not just impulses out of control? Think of Muhammad Ali’s rope a dope. Let the opponents wear themselves out punching at inconsequential matters that generate headlines, but that voters don’t care a whit about. Sort of like prime time TV. A diversion.

It was three nice guys, Clinton, a rapist, Bush, a RINO, and Obama, a socialist, who empowered Kim Jong-un with their feckless policies. Trump calling the nut job names isn’t aggravating anything. Kim was set on his course by the previous three administrations. No, Kim’s not likely to lay down his arms. He’s more likely to get North Korea wiped out. You can thank Trump for that. You can thank Clinton, Bush, and Obama for whatever American casualties occur.

As for national threats, Trump has identified the greatest one simply by being who he is. It’s the military-industrial-intelligence complex. Thank you, Dwight Eisenhower, for seeing it coming.

The entire sabotage of Trump’s administration is exhibit #1. Since JFK was murdered, the chief enemy of this nation has been onshore increasingly running the government from the shadows. Or didn’t you see the news story that says the NSA captures all of everyone’s internet activity in real time? Aw, they’re probably just curious. Congress slapped the CIA’s hands in the 1970s which drove their nefarious and well-documented evil acts just deeper into the shadows.

Exhibit #2 is the fraudulent “dossier” paid for by Clinton and circulated by Obama to every intelligence agency for the purpose of leaking it, and to give an excuse for a special counsel, ala inspector Javert, to go after Trump. James Jesus Angleton would be proud.

Yeah, many people don’t like Trump. The mistake is to equate dislike with opposition. They didn’t like him in 2016 either. He won because they liked her much, much less and understood that crude though he may be, he meant it when he said things must change and they wanted that big time.

The great blessing is that even if the DNC, deep state, black lives matter, Soros, Bezos, et al manage to affect a coup and get Trump impeached and removed (as I predicted a year ago), then we get the righteous Mr. Pence. Not a bad option (as I also predicted).

Incidentally, the progressive party isn’t growing stronger. Don’t believe the mainstream media’s headlines. Remember how for the entire campaign up to the final hour their headlines assured that Hillary was going to win in a walk? The same left-wing media pundits that hyped her and heaped scorn on Trump for saying some nasty things about women all the while have been either actually doing evil things to women or covering up for those in their ranks who do. How does his dirty talk stack up against their actual evil deeds? The media are truly despicable. Trump’s a saint by comparison. And people realize it.

The progressive party is moving farther and farther left on every issue. Americans, bless their hearts, are and have always been centrists for the most part. Dumb of them, but at least cautious. When Bernie campaigns on socialism and nationalizing everything, all you have to do is run commercials of the great “successes” in Havana and Venezuela, where the lack of even toilet paper has made that necessity premium-priced. Centrists like to have toilet paper.

Incidentally, the polls I see show Trump’s core supporters haven’t budged. Same level of support as on the day he won. Meanwhile, the Clinton wing of the Democrats is at war with the far-leftists, and refuse to hand over party control. That’s the party that will split. If the Clinton wing loses control, they’ll sit out – and won’t write checks or cast ballots. Think George McGovern. If the Bernie wing loses control, you’ll likely see a third party, which kills it for both wings.

I grudgingly voted for Trump, hopeful that at least he would reverse some of Obama’s unconstitutional, illegal diktats and prevent Hillary’s evil agenda. He’s done all that in spades, and MUCH more. Next time I’ll enthusiastically endorse and work to see him elected. And I’ll be joined by millions who will have benefited from reduced taxes, relaxed regulations and the love of life for the unborn, to say nothing of religious liberty. Should be a big win.

You ask, “What are we waiting for?” to impeach Trump. We? Really? Choosing up sides in light of all this and more yet to come, you align with Pelosi and Schumer and Soros and Clinton. Really?

I understand the visceral objection to casting a ballot for a piggish big mouth. I couldn’t do it until very late in the campaign. But I realized what was at stake if his opponent won. As others have written, every election is a choice between greater and lesser evils. That’s guaranteed in a world populated exclusively with fallen sinners. Look back over your presidential picks in your lifetime. Which one wasn’t a lesser evil?

I rest my case.