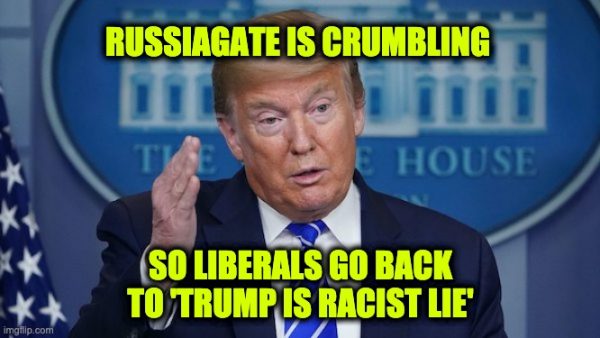 It’s been a bad week for the Russiagate hoax. There was the DOJ’s decision to drop the General Flynn case, the release of the transcripts Schiff was hiding, news that the John Durham investigation was nearing a conclusion and reports that AG Barr was “given a trove of smoking-gun documents that could point directly at former President Barack Obama.  Liberals and their sycophants in the MSM must be getting worried they will run out of lies to pin on President Trump. At least it appears so because they are falling back on the Trump is a racist lie. And their first step in that direction was exploiting the murder of 25-year-old Ahmaud Arbery.

Per the video evidence, Ahmaud Arbery was unarmed and jogging when two white guys, Gregory McMichael and his son Travis, pulled over their truck engaged in a scuffle and shot and killed the young African-American.  President Trump called the shooting of Mr. Arbery “heartbreaking” and promised justice. Despite that declaration, some have decided that part of the blame is on President Trump’s shoulder because, in the leftist script, the President encourages racism.

“It’s heartbreaking that it’s 2020 and this was a lynching of an African American man,” Atlanta Mayor Keisha Lance Bottoms says about the shooting of Ahmaud Arbery. https://t.co/GGX09XO2Ra #CNNSOTU pic.twitter.com/GiEUoqozF0

Joy Reid who has shown herself to be homophobic, anti-Semitic, anti-Mexican, and anti-Christian discussed the shooting on her MSNBC show. Reid and her panel, “wasted no time blaming the NRA as well as President Trump for the tragic shooting of unarmed African-American Glynn County, Georgia resident Ahmaud Arbery.”

The reasons for their declaration have nothing to do with the President and everything to do with politics and the 2020 election. The truth is that President Donald Trump has repeatedly condemned racism and white supremacy, but liberals and the MSM choose to ignore reality. Just the same as they ignore the pre-pandemic historically low black unemployment rates, and the passage of criminal justice reform, a key issue for African-American voters.

Of course, he’s not alone. Many people have missed it. For some reason, that message gets buried in the news. It’s a complete mystery how that doesn’t seem to get any coverage.

So, President Trump uses Twitter to get the message out that he’s not a fan of racism of any kind. Like what he said on the anniversary of Charlottesville.

The riots in Charlottesville a year ago resulted in senseless death and division. We must come together as a nation. I condemn all types of racism and acts of violence. Peace to ALL Americans!

Even when the Democratic Party controlled media is forced to cover his anti-bigotry statements, they always find a way to add a “but”: 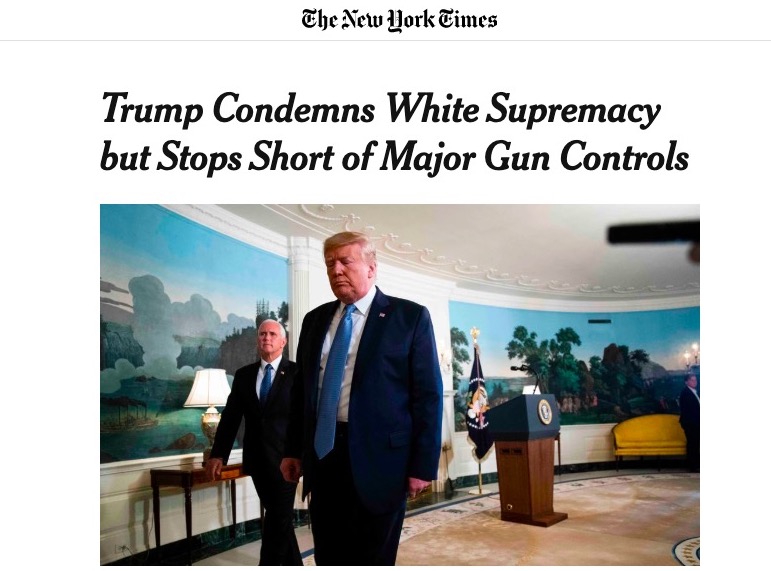 Those are headlines, that’s easy to ignore. If only there was video evidence of President Trump in his own words denouncing and disavowing white nationalists, neo-nazis, the KKK, and David Duke for 17 years.

Oh, sure. That’s 17 years of clips. But how about since Trump became President?

To label the President as a bigot, the liberals always point to Charlottesville. When bringing up Trump’s Charlotteville presser in August 2017, the media usually cuts off right before he says that he condemns neo-nazis and white supremacists:

Here’s the original Charlottesville Press conference watch for yourself:

Two days later, Trump condemned racism, including the KKK, neo-nazis, and white supremacists. He called racists “repugnant to everything we hold dear as Americans” and said, “We are a nation founded on the truth that all of us are created equal. We are equal in the eyes of our Creator, we are equal under the law, and we are equal under our Constitution. Those who spread violence in the name of bigotry strike at the very core of America.” He then spoke about the tragic death of Heather Heyer, who was hit by a car when a white supremacist drove into a crowd of protesters wanting the statue of Robert E. Lee removed.

Democrats and their handmaidens in the mainstream media shot into the stratosphere of hyperbole, calling Trump a racist for his criticism of Democrat Rep. Elijah Cummings and his failed leadership for the City of Baltimore.  Not receiving the same attention from the liberals and the mainstream media (is that redundant?) was a 2018 video of former Baltimore Mayor Catherine Pugh wandering through Cummings’ district and saying, “you can smell the rats.” If Trump was racist, what was the African American Mayor Pugh?

Rep. Cummings must be a racist also because during a 1999 Congressional hearing he described his Baltimore district as, “This morning, I left my community of Baltimore, a drug-infested area, where a lot of the drugs we’re talking about today have already taken the lives of so many children,”

There are so many more examples of liberals and the MSM spinning the President a racist.

President Trump is a man who doesn’t hold anything back and says precisely what he believes just read his tweets. Liberals and the media complain about it all the time. If Trump were a racist, he would come out and say it, leaving no room for interpretation. The same way Democratic Party favorite Louis Farrakhan talks about the Jews. But Trump is not a racist, in fact he believes everyone is equal.

This President doesn’t believe that any race is superior to another, so to make sure the voters don’t repeat what they believe is the mistake of 2016, the media spins everything he says into a bigoted canard.

Democrats and the MSM don’t hear President Trump’s real message about racism. Generally. Trump’s speeches include a version of the words he used in his first speech to Congress in February 2017, outlining his philosophy about the people of America.