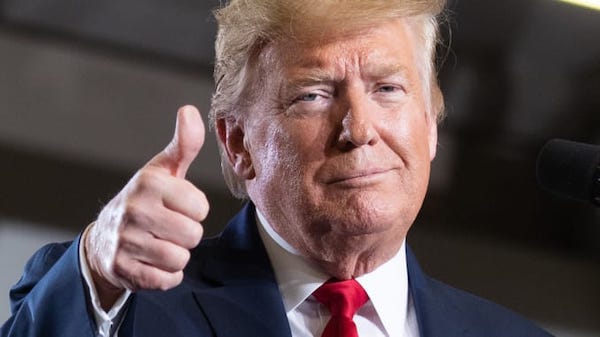 President Trump has been beating the drum on a handful of significant issues that drives the left absolutely mad. The CoronaVirus pandemic has demonstrated that he was right, and they were wrong. Trump Has Been RIGHT

What is interesting, though, is that despite all of the historical reflection, no one else has really noticed that the outbreak of the Wuhan Coronavirus, the way that the Chinese Communist Party handled it, and the reaction of the rest of the world has made it clear that Trump Has Been RIGHT on 7 major points for years.

1) China Is A Threat

When Donald J. Trump began his campaign, one of the things that ticked off the leftist globalists the most was that he was very critical of the American relationship with the Chinese Communist Party. He was called xenophobic and a conspiracy theorist for saying that China was taking advantage of the trade relationship.

It turns out–he was right.

China is a threat because the Chinese Communist government has ambitions to be THE global superpower rather than just a global superpower. They have a massive standing army. But that’s not all–they have sent spies to steal tech from Western nations, they’ve used tech to spy and track people around the world, they are currency manipulators, they own our debt, and they use their bizarre status as a “developing nation” to gain benefits that other countries would never qualify for–from environmental regulation to deference from international organizations. Much of the rest of the world wants to have a good relationship with China–our own Media(D), Hollywood, and even the NBA are willing to cave to China’s demands and ignore their atrocious human rights records just for a shot of those sweet, sweet Chinese dollars.

But now it’s clear that in their determination to become the global superpower, they’re willing to do dangerous things like researching coronaviruses in a lab in central China just miles away from a wet market. And there are some questions that remain whether or not this particular virus, which has essentially shut down the global economy, was manipulated in a lab. They also clearly don’t give a damn if the virus spread outside of their country.

Trump has been consistent on his views regarding China for decades.

✅Everyone taking advantage of USA
✅China, Japan, India eating our lunch
✅Millions of people feel this country isn’t what it use to be
✅Jobs
✅Politics is Dirty Business

Yet, the liberal media can’t seem to understand that once you’re the head honcho negotiating with an adversarial power, it behooves you both to play nice in public. It’s difficult to negotiate with someone when you go in with hostility. If you don’t believe me, just look at how inefficient Speaker Pelosi and Senate Minority Leader Chuck Schumer are when they meet with President Trump after they have their pressers blaming the President for everything and pandering to the liberal media,

During the 2016 campaign, Trump had some fiery rhetoric on China. He set that aside for the Chinese president's trip https://t.co/tA2qQdzOz7 pic.twitter.com/XHU21I1upD

When Trump imposed tariffs on Chinese goods in 2018, the partisan press went nuts and sided with China saying that tariffs were pointless. But, in January of this year, Trump did manage to ink a new trade deal with China which included some of the things that Trump was concerned about–intellectual property rights, technology transfer, a currency clause to prevent manipulation, and an increase in agricultural trade.

Remember when Trump said China was ripping us off during the 2016 campaign? WATCH: pic.twitter.com/00fIAJEosn

Meanwhile, the presumptive Democratic nominee has been dismissing China as a threat despite having spent 8 years as Vice President of the United States. Well…until he changed his mind…and changed it back.

China will eat Joe Biden's lunch- that's for sure.

Like every other good globalist out there, Joe thinks that we should be “helping” China. (And hey, if Hunter’s still managing to make some deals in China, so much the better, right?)

Biden: “we should be helping” China, “the idea that China’s going to eat our lunch…give me a break”https://t.co/dcsFyvAG1E pic.twitter.com/n8EWGhltNu

But Trump insisted that our 5G network not include Chinese technology, which was already being installed under the Obama administration. Trump is having the Chinese tech ripped out.

In 2016, the U.S. was at serious risk of ceding global leadership in 5G to China.

President Trump has sent a clear message that America will do whatever it takes to secure our communications networks. pic.twitter.com/miuYV2H3Lg

If there is one thing that President Trump was criticized the most for was his commitment to securing our borders. The Big Beautiful Wall™ is the thing that seems to get the left frothing mad.

However, as the coronavirus has clearly revealed, knowing who is crossing your border can literally mean the difference between life and death.

In January, President Trump was criticized as “xenophobic” by Democrats and the media for daring to go against the recommendations of the World Health Organization and restricting travel into the U.S. from China.

But it looks like that was the right move as Dr. Fauci and others have said.

Dr. Fauci responds to question about differences between U.S. and Italy, says @realDonaldTrump stopping travel very early from China "has gone a long way" in fight against coronavirus

"Unfortunately, Italy did not do that. They had an open border."
pic.twitter.com/bf62gVytrH

Trump closed off China while others were saying not to. It’s all just fake news since 2016 pic.twitter.com/Rp48fFuMvS

3) The Importance of Made In America

President Obama mocked Trump for wanting to bring American manufacturing back. In June 2016, sweet little globalist Obama famously said, “Some of those jobs of the past are just not going to come back… What magic wand do you have?” Well, Abracadabra, Barry.

It is very, very clear with the shortage of medical equipment–much of which is made in China–that we need to be able to provide for ourselves in an emergency.

Look at how China was trying to manipulate the world into using Huawei for 5G networks by bribing them with access to essential medical equipment–the very same stuff that they had purchased worldwide for themselves and hoarded creating a global shortage in order to corner the market.

There are also the poor quality masks and the faulty test kits that China exported to the rest of the world.

Yesterday, it was my great honor to host our third annual Made in America Showcase at the @WhiteHouse…. pic.twitter.com/mBha7Qprr9

4) The Problems With Regulations

The one thing that most Americans can agree on is that there needs to be an increase in testing for both the virus itself as well as for antibodies.

The Trump administration was criticized for not wanting to accept tests from the World Health Organization and instead insisting on creating their own through the CDC. Considering the way that the WHO has run interference for China from Day 1 of this pandemic, that’s understandable.

The problem was, the CDC-created tests were flawed and, according to MIT Technology Review, red tape prevented other labs from creating their own.

President Trump has cut some of the red tape in order to fast-track FDA approval of an effective coronavirus medication.

The World Health Organization, along with many, many other international organizations, are quite happily dancing to China’s tune despite the United States providing the lion’s share of the funding.

As mentioned earlier in this article, China is treated with kid gloves by the international community because they have this inappropriate designation as a “developing nation” despite being the world’s largest creditor.

According to a Harvard Business Review article in February,

“In total, the Chinese state and its subsidiaries have lent about $1.5 trillion in direct loans and trade credits to more than 150 countries around the globe. This has turned China into the world’s largest official creditor — surpassing traditional, official lenders such as the World Bank, the IMF, or all OECD creditor governments combined.”

President Trump says the @WHO is a "tool of China." pic.twitter.com/y1JSZPsQOW

We are constantly told that the United States needs to “move forward” and join the rest of the world with a socialized healthcare system.

Yet, even at the epicenter of the virus in New York, there was no ventilator shortage as there were in Italy which forced doctors to refuse ventilators to patients over the age of 60.

Canada is facing a looming shortage of personal protective equipment and the Trudeau government is facing criticism for sending 16 tonnes of medical gear to China–which is already hoarding masks, gloves, gowns, and ventilators.

This one might seem like a non sequitur, but it really isn’t. Saudi Arabia and Russia are currently locked in an oil price war, and they’re deliberately doing it amid a global pandemic. Prices for oil per barrel has dropped dramatically as demand has also dropped due to lockdowns worldwide, flooding the market. They’re betting that their short-term pain will be worth it if they can just white-knuckle through it.

Both Saudi Arabia and Russia are trying to gain dominance in the fossil fuel market and cut the knees of the United States’ oil industry. Under the Trump administration, the U.S. went from importing vast quantities of oil to being a net oil exporter for the first time in decades.

Despite what Greta or the other environmentalists tell you, we’re going to be reliant on fossil fuels for a long, long time. Sure, we can look for ways to move off of them, but in the meantime, we still need to drive our cars, fuel our planes, heat our homes, and we’ll still need things that are made with petroleum products.

We can go back to buying oil from places that don’t have the same Western view of human rights or, that quite frankly, hate us, or we can buy American oil. There is no other alternative at the moment.

It’s pretty clear that although President Trump speaks from the cuff, and is dismissed as an idiot by his opponents. But he’s been spot on with these 7 points, and they’ve been way off.

This is probably why his opponents hate him so much.

Note: President Trump summed up several points within this article at a press briefing on Sunday. Here’s the video:

"We've learned that it's nice to make things in the U.S." — President @realDonaldTrump pic.twitter.com/yOE1v4jTBY