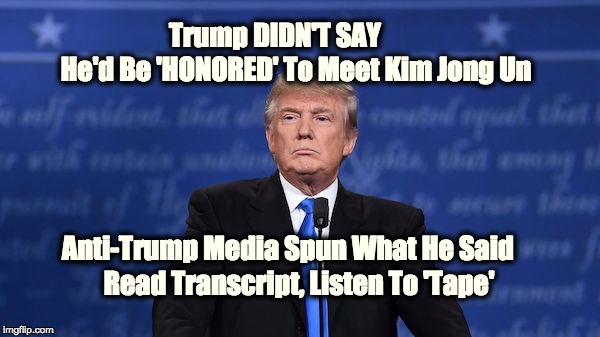 The Democrats and the mainstream media went absolutely NUTS! How could the president tell Bloomberg News that he would be honored to meet with Kim Jong Un? The guy is a murderer, he used chemical weapons on his half-brother, he used a rocket launcher to kill a girlfriend…and that’s how he treats people he likes.

Kim Jong Un is a horrible tyrant who kills North Koreans without conscience, and now he is on the edge of being able to threaten the United States with a nuclear attack. I agree how could the president say that? Happily I can report he didn’t say that, the media spun his words.

The Washington Post headline was typical of the news report about Trump’s comment, “President Trump says he would be ‘honored’ to meet with North Korean dictator.” CNN, Good Morning America, The Today Show, etc., the mainstream media all reported their own version of Trump’s words.

If you read the exact quote it seems as if he was saying, he didn’t want to have to meet Kim Jong Un, but if circumstances were right, he would honored to do it to make peace for America.

He first talks about how it would be a tough meeting if “we have to do that” and continues:

“If it would be appropriate for me to meet with him, I would absolutely, I would be honored to do it, If it’s under the, again, under the right circumstances. But I would do that.”

He then follows up with strong words by saying we can’t let him do or say what he’s doing.

If Trump was saying it would be an honor to meet the short, chubby, blood-thirsty tyrant with a funny haircut,  he wouldn’t have begun with the equivalent of it’s a tough job but someone has to do it, and would have said I would be honored to meet him, instead of what he said,  “I would be honored to do it.”

The media stories regarding the President’s Kim Jong Un comment is just one more example of how the MSM is twisting Trump’s words to create an anti-Trump narrative.

Below is a transcript of relevant part of the Bloomberg interview, and below that a sound file of the entire interview. The Kim Jong Un part of the discussion starts at the 18 minute mark.

BLOOMBERG: So what I want to ask you is, have you thought about this: Would you be willing to meet with Kim Jong Un personally to try to reach a (…)

TRUMP: OK. So, we have a potentially very bad situation that we will meet in the toughest of all manners if we have to do that.

If it would be appropriate for me to meet with him, I would absolutely — I would be honored to do it. If it’s under the — again, under the right circumstances. But I would — I would do that.

Hey, look, I’m meeting with Abbas on Wednesday, the leader of Palestine. You think that’s slightly smaller, right? I’m meeting with Abbas on Wednesday. And people are saying that’s a very good thing to do, because I’d like to see peace in the Middle East and I’d like to see the Palestinians and the Israelis come together and Israel come together and have peace.

BLOOMBERG: Do you think these are the right circumstances now?

So, we cannot let a situation happen where — under any circumstances where he can launch missiles into the United States. Plus we happen to have great allies in that area and I feel very strongly toward those allies.

So, yes, under the right circumstances, I would absolutely meet with him.

BLOOMBERG: And your thinking — are you thinking…

TRUMP: Now, most political people would never say that. But I’m telling you, under the right circumstances, I would meet with him.