Reports Claim He Will State He Is Still GOP Leader, And He's The Presumptive 2024 Nominee 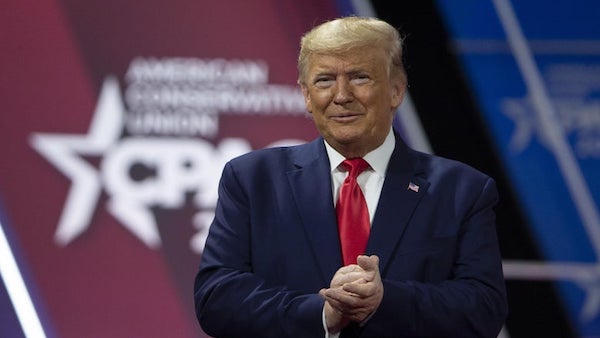 The Keynote CPAC speaker this coming Sunday (2/28) will be former president Donald Trump. It’s going to be a must-see for all politics junkies by all indications, no matter their political affiliation. The word is that he will break major news.  A longtime adviser to the former President told Axios the speech will be a “show of force” in which he will announce, “I may not have Twitter or the Oval Office, but I’m still in charge.” Trump CPAC speech

The adviser also told Axios that Trump is expected to argue that he is still the man to drain the Washington swamp as the Republican “presumptive 2024 nominee.”Trump will be making his speech on Sunday, the final day of the conference. During the week, Axios adds, “advisers will meet with him at Mar-a-Lago” where they will “plan his next political moves” and “set up the machinery for kingmaking in the 2022 midterms.”

Donald Trump certainly seems to have the numbers to back up his claims of being in charge of the Republican party.

A poll released this past weekend indicates nearly 50 percent of Trump voters would follow the former President to a new party and abandon the GOP altogether.

A vast majority of GOP voters want to see him play a big role in the party’s future, including running again in 2024.

He seems to strategically leaving all options open to give him leverage within the party and with voters.

?PARTY OF TRUMP
– Trump’s looking to assert himself as top 2024 contender via CPAC speech, sources tell @mikeallen
– His leadership PAC has $75 million on hand & database of tens of millions of names
– Even if he doesn’t run, these stunts give him powerhttps://t.co/HcnsTXEYBj

Sen. Lindsey Graham (R-SC) seems to agree   After spending the weekend at Mar-a-Lago with the former president, he told Sean Hannity, “I’ve never felt better about president Trump’s leading the party than I do right now.” He will position himself as the alternative to Biden,  and he will ” make a speech that will unify Republicans on policy” (see video at the bottom of post).

Graham says that Trump is already working to unite and energize the GOP to win control of the U.S. Senate and the U.S. House of Representatives in 2022. “He’s been working the phones. I was with him all weekend. He wants us to win in 2022.”

Regular readers of this site know that The Lid has covered CPAC for a dozen years. For political wonks and those of the Conservative persuasion, CPAC is the must go-to or live stream event of the year. It is where one can learn the “whys” behind policies, the information to help one decide whether the policies are good or bad, and a place to get the scoop about happenings behind the scenes. Sadly I won’t be able to attend CPAC in person this year because of family issues, but I will be live streaming and watching every second conference from home. The agenda looks incredible. If you want to live stream the entire conference (it’s free) as I will, or just watch Trump’s news-breaking speech on Sunday at 3;40PM, this is the link to the site where you can watch.