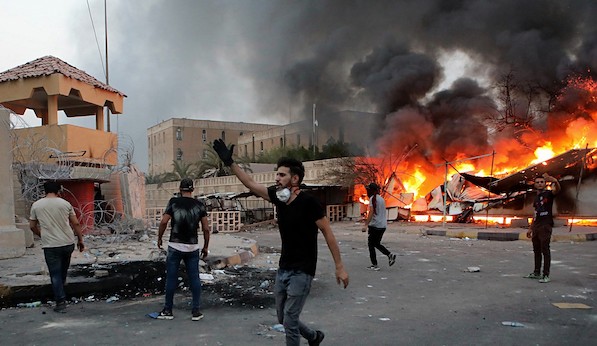 After 4 years of President Trump eating Iran’s lunch, They are looking to snipe from the sidelines. Maybe they think Trump’s taken his eye off the ball. They are wrong. It’s true that the President has a lot on his plate these days — but he’s been like that all his life. That doesn’t mean he can’t keep up with what needs to be kept up with. Trump calls out Iran

It’s not like Iran’s dealing with Obama/Biden, after all, who bends over backward to appease their ‘supreme leader” and the mullahs.

…Some friendly health advice to Iran: If one American is killed, I will hold Iran responsible. Think it over.

Gee, what could Trump possibly mean by that cryptic message?

What it could possibly mean…

It means that unlike the Obama/Biden administration, President Trump does not make empty threats.

Along with the Twitter message, the President sent a more visible warning:

A week ago, the US Submarine Georgia transited the Strait of Hormuz on the surface – and in that case, there is no enforceable requirement for it, as there is in the Suez Canal.  The U.S. Navy also posted images taken of the sub and cruisers during the transit (presumably by Navy aircraft).  The images were put on Twitter the same day, a rare move, but they were sending a signal to Iran.

At the same time, an Israeli sub was intentionally visible as It sailed through the Suez Canal.

It’s not out of the question to imagine that warnings to Iran are about more than rockets launched at the Green Zone and the Iran-backed menace to shipping in the region.  The engagement of Israel in an overt role is especially interesting, suggesting an unusual scope of perceived intention by Iran.  That said, I would balance expectations about Iran’s intentions between threats to regional nations — Arab nations and Israel — and threats to the United States, starting but not ending with our forces in theater.  I suspect the Iranians are watching closely the Georgia runoff election on 5 January, and the convening of Congress on 6 January.  The more inevitable Biden looks, the more they will be emboldened to attempt.

But as long as Donald J. Trump is the President, he is not going to allow Iran to threaten or attack America or our allies.  I don’t believe the same thing will happen if Joe Biden takes over.