Alexandria Ocasio-Cortez Is Pissed Trump Called Her AOC During Debate 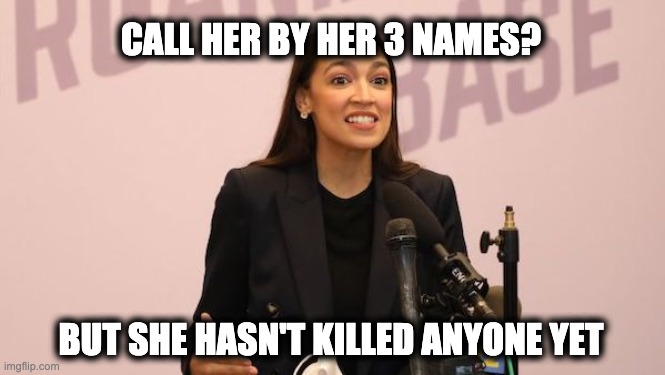 During the last presidential debate held on Thursday night, President Donald Trump referred to everyone’s least favorite Democratic Socialist, Rep. Alexandria Ocasio-Cortez, by her initials, “AOC,” which pretty much everyone calls her. Trump called her AOC

However, it appears this did not settle well with her. In fact, she considered it to be sexist and demands that the president call her “congresswoman.” I don’t know this for a fact, but I believe that Trump doesn’t want to call her at all.

I suppose she never saw the musical Hair which features this song:

LBJ took the IRT
Down to 4th Street USA
When he got there
What did he see?
The youth of America on LSD

“I wonder if Republicans understand how much they advertise their disrespect of women in debates when they consistently call women members of Congress by nicknames or first names while using titles & last names when referring to men of = stature. Women notice. It conveys a lot,” she tweeted.

“AOC is a name given to me by community & the people. Y’all can call me AOC. Government colleagues referring to each other in a public or professional context (aka who don’t know me like that) should refer to their peers as ‘Congresswoman,’ ‘Representative,’ etc. Basic respect 101,” she continued.

AOC is a name given to me by community & the people. Y’all can call me AOC.

Government colleagues referring to each other in a public or professional context (aka who don’t know me like that) should refer to their peers as “Congresswoman,” “Representative,”etc. Basic respect 101

The responses to AOC’s tweet were varied, with a lot of conservatives pointing out that there’s a big difference between nicknames and the use of a person’s initials. Many went on to note that President Trump often refers to men with more personal names, for example, referring to Joe Biden as simply, “Joe.” Actually, he calls Biden sleepy Joe.

And, as you might expect, progressives eager to be white knights showed up to defend her from the big, bad orange man.

“AOC is not a nickname, they’re your initials. JFK is also not a nickname. The FBI, again, is not a nickname. You can maybe say that Trump should’ve still used your official title, but Obama was also referenced sans title, and you don’t see him whining about it on Twitter…” said Lauren Chen in a tweet.

And the three-namers who are called by their full names are murders like, John Wilkes Booth, John Wayne Gacy, Gary Leon Ridgway, Mark David Chapman, Lee Harvey Oswald, etc. Perhaps she is called AOC because she hasn’t killed anyone, although she is trying to kill the economy.

“Studies have found that people are more than twice as likely to call male professionals by their last name, compared with female professionals, who are often called by their first name. This bias is so strong that people do this even when they refer to fictional men and women,” posted writer Simon Hedlin.

At the end of the day, this is much ado about nothing. AOC is just looking for some way to become a victim and to trash the president so that she can earn some cool, hip relevant points with the Democratic Party base and hopefully keep her job.