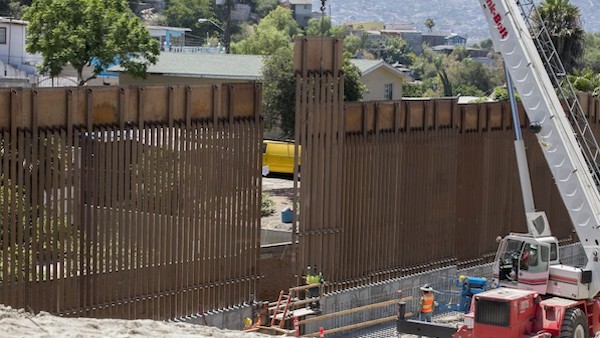 Another President Trump program is working. Rodney Scott, the new head of the border patrol, declared that the parts of the new wall system that has been built or replaced old fencing are 90% “effective,” up from a low 10% before they were constructed, the Washington Examiner disclosed. Trump border wall working

“It changes everything,” said Chief Rodney Scott, of the 135-136 miles of new wall, roadways, and high-tech spyware. “There is a huge return on investment,” he added.

“This system is going to have a huge impact,” added Deputy Chief Raul Ortiz.

Scott explained that in the San Diego area, the fence had essentially stopped all human and vehicle crossings.  And because it is so effective the border wall is saving money:

And, in an added benefit, it now requires 150 fewer border agents, a savings of $28 million in salaries and benefits, he said at a press briefing, his first since he and Ortiz took over CBP in January.

“There is return after return,” said Scott.

The wall is especially good at stopping trucks and cars, he said, because it takes too much time and effort to saw through several wall bollards needed to make an opening that is big enough to drive through.

“The border wall system all but stopped that completely,” he said.

The failed border barriers that Obama put up instead of the fences designated by the 2006 Secure Fence Act, were easy for illegals to knock down, so easy in fact that illegals were simply driving right over them. But the new fencing won’t allow vehicles to pass. The barriers have completely ended vehicle crossings.

Scott added that drug trafficking has also been ended in the region.

“It shut down that entire threat. Anywhere we built the border wall system, the first thing it does is shut off those drive-throughs. The second thing is, it shuts off massive amounts of people coming through at the same time. So, it’s forced the drug cartels, especially El Chapo’s group, Sinaloa, to shift tactics,” he said.

The safety that comes with the wall has led to economic development in some areas:

Scott said, for example, that in San Ysidro there is now a factory outlet mall that creates $6.6 million in local tax revenue and a pricey housing development.

President Trump’s border wall is working in so many ways, but don’t ask Pelosi or Schumer, all they care about is opposing Trump.