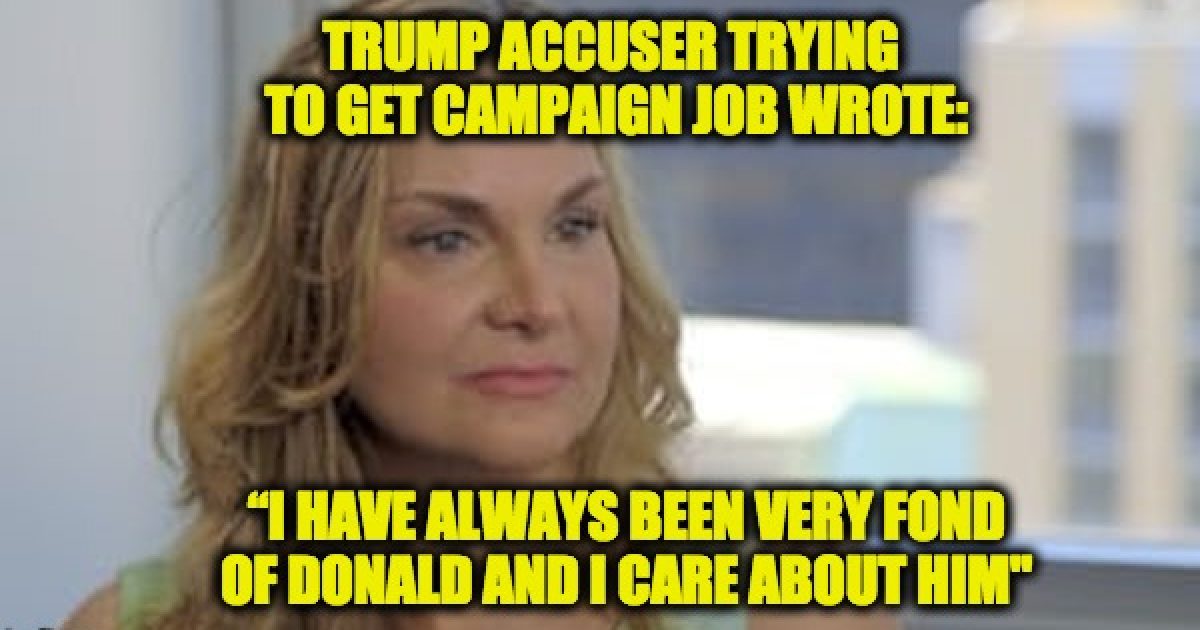 One of the women accusing President Trump of sexual harassment, Jill Harth, spent much of the campaign begging the candidate for a job.  Via Trump’s lawyers, The Hill got a hold of emails Ms. Harth sent to Trump asking to be his make-up artist.  She also offered to be a campaign surrogate willing to tell voters how Trump “helped me with my self-confidence and all positive things about how he is with women.”

“Hi Donald, you are doing a tremendous job of shaking things up in the United States. I am definitely on Team Trump as so many others are,” Jill Harth wrote Trump in an Oct. 1, 2015, email sent to him through his New York company’s headquarters.

“I can’t watch television without seeing you or hearing your name everywhere! It’s a good thing for sure but PLEASE let me do your makeup for a television interview, a debate, a photo session, anything!” Harth wrote.

“It kills me to see you looking too orange and with white circles under the eyes. I will get your skin looking smoother and even toned,” she added, boasting she would “sculpt your face” to look good on high-definition television sets.

In another email, Jill Harth seemed to show she was lying about her accusations:

Because if she wasn’t lying about the accusations then she was willing to lie to the people at a “rally or somewhere.”

In an August email she said “I have always been very fond of Donald and I CARE about him,”  because he helped her to get out of an abusive relationship

Those are strange words for a woman who sued (and withdrew) Pres. Trump in 1997 over the supposed groping incident.

According to Harth the reason she pushed for the job and used the flattering language because she was trying to get Trump to be the spokesman for a line of men’s cosmetics she had developed.

She told The Hill that she didn’t want to go public again with her 1997 lawsuit or its allegations and but during the campaign reporters “forced her name unwillingly into the public domain when they discovered her old litigation.”  Harth claims she went negative on Trump because he denied her allegations when asked by reporters.

“Once the media rediscovered the complaint, Donald responded to it by repeatedly denigrating and disparaging me and releasing an old National Enquirer article from the ’90s that he planted,” she said.

Harth dismissed any suggestion that her prior effort to win business from Trump early in the campaign or the donor support she received should affect the public’s view about her allegations, which she said are true.

A very successful make-up artist to the stars and owner of a cosmetic company, Jill Harth has reaped a financial reward since she went public again recently. As reported here last week her lawyer Lisa Bloom arranged for donors to pay off her mortgage. And:

When Bloom went on TV once to defend her client, Harth touted a corresponding spike in the sales of her cosmetic products, according to a text message Harth sent the lawyer and a mutual friend.

A lawsuit, followed by a buisness proposal, a paid-off mortgage, and a sales spike.  It seems a bit strange that every part of this Jill Harth story is linked to Ms. Harth making money—at the very least it casts doubt on her claims.