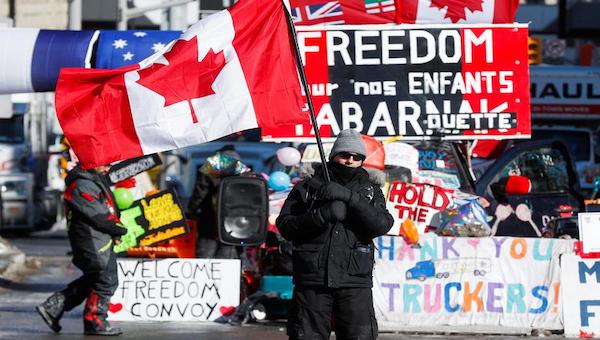 Other than some flippant invective, Canadian Prime Minister Justin Trudeau took a somewhat soft approach to anti-mandate demonstrations across the country’s city centers, highways, and border crossings over the past three weeks.

But as his left flank grew agitated, the 50-year-old trust fund beta male invoked sweeping emergency powers Monday to enable his government to clear the blockades. While that desperation may resonate with some Canadians, Trudeau’s suspension of civil liberties should appall any person of conscience. It will also make the crisis worse.

Whether he understands them or not, Trudeau’s long-term goals effectively ruin the lives of anyone involved in current and future demonstrations.

The military can now ban public assembly and restrict travel, while police can seize vehicles and compel private truckers to provide services to law-enforcement agencies. Any violation could result in revocation of insurance and frozen bank accounts — sans court order.

The law invoked is reminiscent of an emergency measure the prime minister’s father pushed a half-century ago. But that followed a real terrorist campaign of kidnappings and violence in Quebec.
fff

A diverse group of truckers cheering, eating barbecue, and playing street hockey are not akin to the Quebec separatist movement.

“This is about following the money,” she claimed. “This is about stopping the financing of these illegal blockades.”
ff
What proof of danger? The worst anyone can find is an Alberta-based group possibly seeking mayhem after police arrested 11 people in possession of guns and body armor; they may have used these items against police if the blockade was disrupted.
ff
“We are not limiting people’s freedom of speech,” Trudeau argued. “We are not limiting freedom of peaceful assembly. We are not preventing people from exercising their right to protest legally.”

If arrogant pseudo-intellectuals like Trudeau treat their citizens like violent insurrectionists, it does not take a psychology degree to realize this same attitude likely can motivate these protesters to hit the streets.

Latest from #Ottawa:
Truckers I spoke to last night were largely undeterred by Trudeau’s use of the #EmergenciesAct. Rather, they felt it was another “power grab” and said they would continue their protest

None of this extreme pushback and control is necessary.
cc

Over 90 percent of Canadian truckers are vaccinated! They are not a risk to anyone.
fff</span>
Their government could easily drop a wholly unnecessary mandate that exists only to bully 10 percent of the population, which will do almost nothing to protect anyone from coronavirus infections.
fff</span>
Even the Toronto Star — the country’s largest and most liberal newspaper  — condemned Trudeau’s actions.
xx

“We will not join the cheering,” a staff editorial began, then added, “Federal emergency powers may now be necessary as a last resort, but going that route is a shocking admission of failure by governments at all levels. The situation could and should already have been resolved by good intelligence, smart planning, and effective coordination.”

That’s a consistent stance, but with identity politics and the current culture war obscuring reality, how many U.S. Democrats would agree?

“If I were to describe these protests to a left-winger 50 — or 150 years — ago they would sound great. Proletarian laborers spontaneously using their class power to monkey-wrench the wheels of global capitalism to press their grievances! This was once the stuff of heroic socialist agitation. The fact that tow truck drivers refused to help remove the blockade would be seen as the very soul of worker solidarity. Now…liberals shrugged or cheered.”