Russia Says Troops Were Poisoned Ukraine Says It Was Self-Inflicted 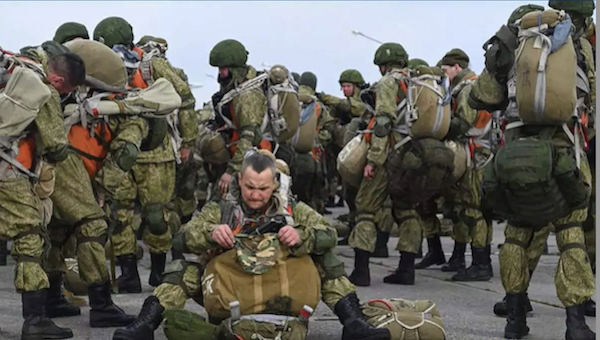 Russia and Ukraine have entered the slog of war.  This is not to be confused with the fog of war, which describes the strange disassociation that many feel as they enter into the surreal world of wholesale violence and willful destruction.

No, the slog of war is the period of time in which a conflict begins to drag on, with both sides meeting a sort of balancing act of offense and defense.  No real ground is gained, at least not swiftly, and the evils of war begin to look routine.

And so, in this slow-moving phase of the war, the two parties have begun lobbing wild accusations at one another in an attempt to gain ground in the PR war.  Both have already accused one another of being careless with a massive nuclear power plant, with Ukraine going so far as to suggest that Russia may force some sort of accident at the site.

Now the two nations are trading bars about botulism after a number of Russian soldiers fell ill in Ukraine.

The Russian defence ministry said a number of Russian servicemen had been taken to a military hospital with signs of serious poisoning on July 31. Tests showed a toxic substance, botulinum toxin type B, in their bodies, it said.

“On the fact of chemical terrorism sanctioned by the (Ukrainian President Volodymyr) Zelenskiy regime, Russia is preparing supporting evidence with the results of all the analyses,” the ministry said in a statement.

It did not say how many servicemen had suffered or what their condition was now. It did not say what the “supporting evidence” was.

But here is where it gets strange:

Botulinum toxin type B is a neurotoxin that can cause botulism when ingested in previously contaminated food products, but it can also have medical uses.

Ukraine’s defence ministry did not immediately respond to a Reuters request for comment, but interior ministry adviser Anton Gerashchenko commented on the Russian allegation on the Telegram messaging app.

“The department (Russian defence ministry) does not clarify whether the poisoning could have been caused by expired canned meat, in which botulinum toxin is often found. Overdue rations have been massively complained about by the occupying forces since the first days of the invasion of Ukraine,” he said.

Given just how poorly prepared the Russian troops were at the onset of the invasion, rotten military meals certainly aren’t out of the question.