Who’s The Traitor From Obama Admin. Leaking About General Flynn? 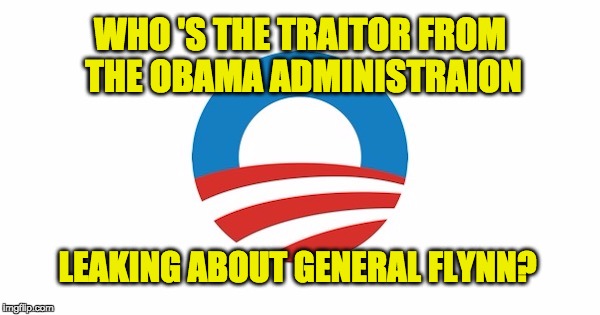 Yes, Gen. Michael Flynn deserved to be fired! Not because of his discussions with the Russian Ambassador,  but because he gave misinformation to his bosses who depend on him to make decisions about the safety of the United States. But the bigger issue in my humble opinion is who is committing treason by leaking American secrets to the press.

The General Flynn leak was just one of a series of foreign policy leaks made to stop President Trump’s nascent administration from succeeding. A conversation between the President and the Prime Minister of Australia was leaked as was a conversation between Trump and the President of Mexico. A conversation with Netanyahu about settlements was leaked to the Jerusalem Post forcing the Administration to release a statement about the official US position on those Israeli communities. And now there is the transcript of Flynn’s discussion with the Russian ambassador, which is the most serious of the leaks.

As a regular practice, U.S. Intelligence monitors conversations between private citizens and officials from foreign governments. But the actual name of the U.S. citizens are kept secret unless there is a court order and approval from the President, or the most senior members of the national security council. We are talking about the top person, or top two people at the CIA, the national security adviser or his deputy, etc.

As the Flynn conversation with the Russian diplomat occurred in December, it means the approval process took place under the Obama administration as the initial reports about what was discussed. It also means that the only people who could have possibly known about the call’s content was Pres. Obama, Director of National Intelligence James R. Clapper, CIA Director Brennan, DHS Director Jeh Johnson, National Security Adviser Susan Rice, and some are suggesting Rice’s #2 Ben Rhodes. Rhodes is an expert at using leaks to get what he wants, he once told the NY Times that he’s  the “ventriloquist” to  the mainstream media’s dummies.

While speaking with Fox Business, former CIA analyst and retired U.S. Army Reserve Lieutenant Colonel Tony Shaffer warned that Democrats should be careful of what they wish for and said he believes the leaked calls by Gen. Michael Flynn will lead right back to officials in the former Obama regime.

“I would put this right at the feet of John Brennan and Jim Clapper and I would even go so far as to say the Obama White House was directly involved before they left. Ben Rhodes and those folks…”

He went on to say that Democrats are behind the leaks as well as some Republicans. “Bring it on,” he added.

Then there is the Wall Street Journal which  wondered if spies listening to Flynn broke the law.

“That is, they are supposed to protect the identity and speech of innocent Americans. Yet the Washington Post, which broke the story, says it spoke to multiple U.S. officials claiming to know what Mr. Flynn said on that call,” the Journal said.  “The questions someone in the White House should ask the National Security Agency is why it didn’t use minimization procedures to protect Mr. Flynn? Or did it also have a court order to listen to Mr. Flynn, and how did it justify that judicial request?”

“If Mr. Flynn was under U.S. intelligence surveillance, then Mr. Trump should know why, and at this point so should the American public. Maybe there’s an innocent explanation, but the Trump White House needs to know what’s going on with Mr. Flynn and U.S. spies,” the Journal added.

There is a traitor in our midst, and most probably it is a senior person from the Obama Administration, who put politics in front of national security and the constitution. This has nothing to do with General Flynn and everything to do with trying to destroy the Trump administration.

Their leak may have revealed our methods of finding out about the phone calls between a private U.S. citizen an a foreign official, The leaks also portrays the as weak and confused, leaving an opening for our enemies to push back (those North Korean and Iranian missiles, along with the Russian spy ship off our coast? And what about the Constitution? The reason for the rules about not revealing the American on the international phone call is because of the fourth amendment .

And one question for the media.  When Wikileaks started publishing Jon Podesta’s emails, many in the MSM refused to publish the story because they were supposedly stolen. Why though, are those same media outlets publishing the story of the Gen. Flynn conversation when they come from even more “dirty” sources–stolen national security information. Perhaps it’s because just like the Obama administration traitors, they want the Trump administration to fail.