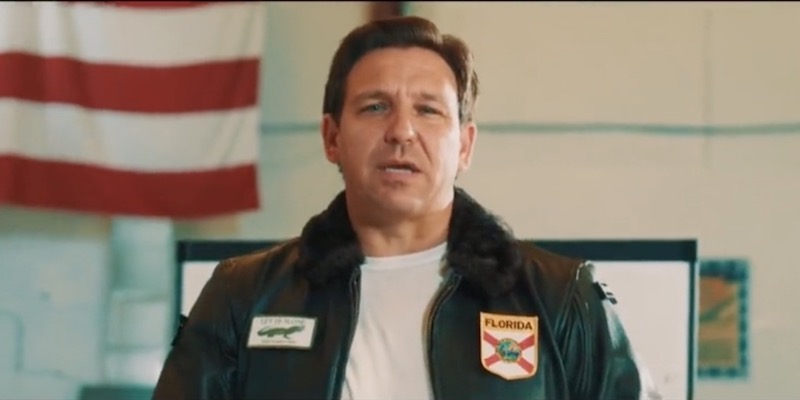 California can keep their ‘Governator’… Florida has ‘Top Gov.’

Ron DeSantis has been one HELL of a governor, with the stones to zig when everyone else zags.

He brought Florida through the COVID craziness, making decisions to reopen that so many hand-wringing ‘experts’ in labcoats or TV networks assured us would end in disaster. But by the end of the COVID craziness, Florida was a destination state that set itself apart by making policy decisions that did NOT destroy the education of an entire generation of children… or the employment opportunities of their parents.

His clear-eyed policy decisions have been the envy of residents in many other states, but for all that, what REALLY lands him on the shortlist for Presidential conversation is his ability to communicate and turn media traps back on the people who set them.

He played off the enormous popularity of this summer’s blockbuster, Top Gun, in highlighting his history of doing exactly that by offering a class in ‘Top Gov’ school, in an ad chock full of the same feel-good patriotic imagery the left loves to rail against.

The ad is pure awesome from the beginning… camera trained on DeSantis walking out of an airplane hanger with a caption reading: FREEDOM HEADQUARTERS [Florida].

Naturally, he’s dressed the part of a Top Gun instructor, with Tom Cruise’s jacket patches replaced by something more appropriate for Florida’s Governor..

As ‘Top Gov’ instructor, he gives his students a lesson in dog-fighting … taking on the corporate media.

His three rules of engagement lessons are each backed up with some of our favorite clips of his owning the media in real-time and on camera.

Rule One: Don’t Fire Unless Fired Upon… but when they fire, you fire back with overwhelming force

Rule Two: Never, Ever Back Down From A Fight…

If this is a glimpse of what the Republican party can look forward to in future federal elections, we’re in for interesting times indeed.