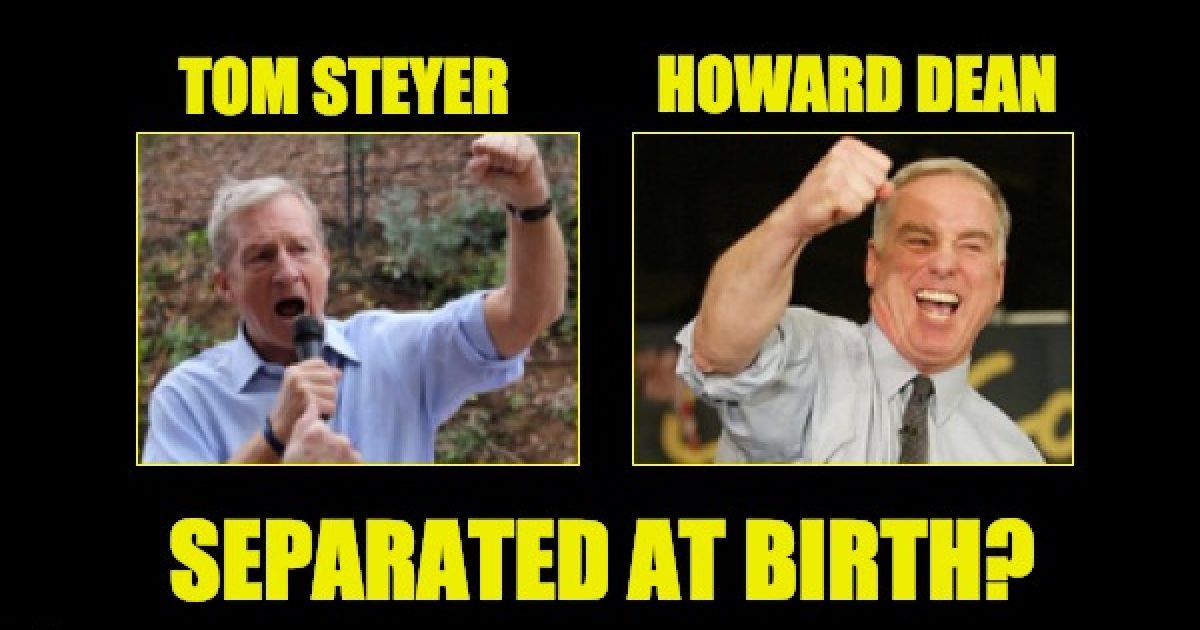 Billionaire Tom Steyer is targeting Iowa’s new congresswomen in television ads calling on them to join his efforts to impeach President Trump. That is only a sliver of his latest waste of money trying to push the President out of office.

Steyer launched his Need to Impeach in October 2017. Why all the panic? Billions are at stake for the globalists, and that’s why they want to impeach President Donald Trump so badly.

https://t.co/AvTf877tZw
The Democratic Party appears to have one purpose: Destroy Trump. Nothing more, and nothing less. And if they succeed — what then? Can any political movement survive where the destruction of one person is their top and only purpose?

By the way, look at the picture above. Now wonder has anyone ever seen Tom Steyer and Howard Dean at the same place at the same time?

Billionaire Tom Steyer is dumping more money into his campaign to oust President Donald Trump as incoming Democratic lawmakers consider jumping on board the movement to impeach the president.

Steyer is plowing another $6 million into what some Democratic leaders worry is an ill-fated attempt to impeach the president, The Daily Beast reported Friday. Some liberal progressive lawmakers are warming to the idea, while House Majority Leader Nancy Pelosi pushes back.

He remains focused on “getting Donald Trump out of the White House,” Need to Impeach strategist Kevin Mack told reporters. “We’d like to have that happen through impeachment but if we have to we’ll beat him at the ballot box in 2020,” he noted, referring to speculation of Steyer’s political ambition.

That bulk of the cash will go to national cable and broadcast advertising in early presidential primary states like Iowa, Nevada, and South Carolina. Approximately $2.5 million will go to television campaigns while another $3.5 million is expected to be plowed into a digital effort.

Democrats need to get over themselves – we the people electedTrump and we’ll re-elect him in 2020 – I’m appalled that during your rush to impeach Trump not a single Dem has been arrested and look at all the laws they’ve broken especially Clinton. https://t.co/JgblNLlvq9

This is what happens when you have more money than sense. Billionaire Tom Steyer can dump every dime he has in his campaign against Trump and its not going to make a bit of difference. There are no grounds for impeachment! But perhaps he can wear a Howard Dean costume next Halloween.

This is how completely misled the Democrat party has become. Fueled only by their hatred of President Trump.