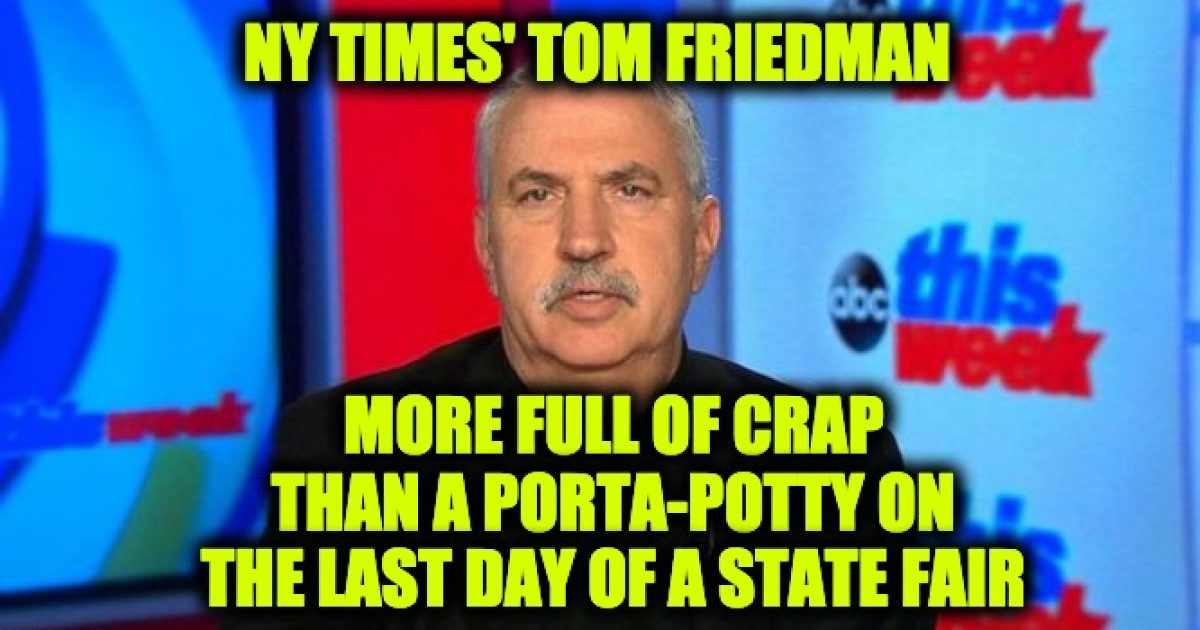 Next month Moment magazine will hold its “DC Gala & Awards Dinner” honoring four distinguished journalists. The presenters will be four prominent individuals. How disappointing that one of the presenters they have chosen has publicly accused Jews of controlling the White House and paying off members of Congress. Especially considering Moment magazine is a Jewish publication originally co-founded by Elie Wiesel. Tom Friedman

I’m referring to Thomas Friedman of The New York Times.

Friedman’s troubling record on Israel began during his years as a student at Brandeis University. In 1974, Yasser Arafat, gun holster on his hip, made his infamous first appearance at the United Nations. Jews in New York City organized a massive rally against him. Friedman and a handful of fellow-students signed an open letter denouncing the anti-Arafat rally.

That happened just a few months after Arafat’s terrorists massacred 18 Jews—including eight children—in Kiryat Shemona, and then 27 more Jews—including 21 children—in Ma’alot. Tom Friedman was demanding that Israel negotiate with (and, of course, make concessions to) the chief terrorist responsible for those murders.

Friedman told the campus newspaper, The Brandeis Justice, that his career goal was to work at “the Middle East desk of the State Department.” That would have given him opportunities to impose his views on Israel.

That didn’t work out. But Friedman did later become a personal friend and tennis partner of Secretary of State James Baker, the anti-Israel secretary of state famous for saying “f**k the Jews, they won’t vote for us anyway.” According to Baker’s autobiography, Friedman gave him advice on how to more effectively pressure Israel.

Around 1982, Friedman went off to Lebanon as a correspondent for The New York Times, posing as an objective reporter. Later, in his book ‘From Beirut to Jerusalem,’ Friedman boasted that he “buried” Israel’s top military brass by blaming them for Lebanon’s Christian killings of Palestinian Muslims. So much for journalistic objectivity!

In the book, Friedman falsely portrayed himself as a lover of Israel who only became its critic when he witnessed Israeli actions in Lebanon. I guess if he admitted the truth—that he had been hostile to Israel since his Brandeis University days—it would have blown his cover. He needed to pretend that it was Israel, which made him hate Israel.

Tom Friedman then spent several years as the Jerusalem bureau chief for the Times. The “news” articles emanating from that bureau are almost legendary for their extreme bias against Israel. After that stint, Friedman returned to the United States to become a regular op-ed page columnist.

In several of his more notorious columns over the years, Friedman has used the Protocols of the Elders of Zion handbook to portray Jews as sinister manipulators who try to control world leaders.

In his New York Times column of February 5, 2004, for example, Friedman wrote that Israeli Prime Minister Ariel Sharon has “had George Bush under house arrest in the Oval Office … surrounded by Jewish and Christian pro-Israel lobbyists, by a vice president, Dick Cheney, who’s ready to do whatever Mr. Sharon dictates …”

In his December 13, 2011 column, Tom Friedman asserted that the standing ovations Prime Minister Benjamin Netanyahu received when he addressed Congress were “bought and paid for by the Israel lobby.” I beg American neo-Nazis were so proud.

And in his November 19, 2013 column, Friedman wrote: “[N]ever have I seen more lawmakers — Democrats and Republicans — more willing to take Israel’s side against their own president’s.” He claimed there is “a growing tendency by many American lawmakers to do whatever the Israel lobby asks them to do to garner Jewish votes and campaign donations.” Well either that or perhaps they realized that Barack Obama is an anti-Semite.

Somebody who has slandered Israel and the American Jewish community in this fashion does not deserve the honor of being one of the featured “presenters” at the Moment awards dinner.

I’m disappointed that Jewish organizations, large and small, have so far said nothing about Friedman being given this honor.

I understand why some groups are reluctant to criticize Moment or Friedman, it’s not the kind of issue that’s great for fund-raising. Anti-Semitism on campus, for example, has a much stronger emotional appeal to potential donors.

I don’t dispute the fact that Jewish organizations need to raise funds. They have salaries to pay and many other expenses. I understand why that might influence their considerations when deciding their agenda.

But I would argue that the question of giving an honor to a serial slanderer of Israel deserves to be on the Jewish agenda. First, there is the powerful symbolism involved. A healthy Jewish community needs to exhibit what the late Zionist leader Ze’ev Jabotinsky called “Hadar”— pride and self-respect. When someone kicks you, you don’t give him an honor.

But the issue more than symbolic. It’s also practical. Giving an honor to somebody who slanders Israel and the American Jewish community sends a message to all potential slanderers that Jews are fair game. Do we really want to be sending that kind of message?

Moshe Phillips is the national director of Herut North America’s U.S. division; Herut is an international movement for Zionist pride and education and is dedicated to the ideals of pre-World War Two Zionist leader Ze’ev Jabotinsky. Herut’s website is https://herutna.org/