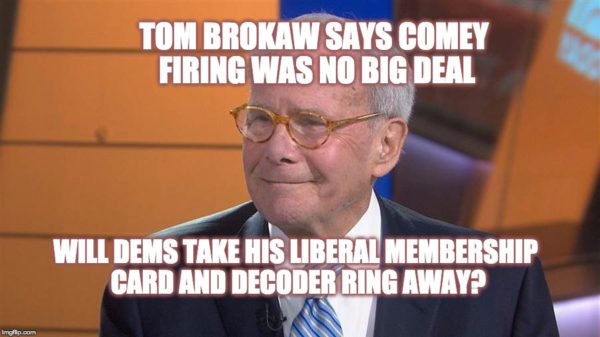 Ancient media liberal and one of the inventors of fake news himself, Tom Brokaw, suddenly became the voice of reason earlier this week when he chided liberals for pretending that the firing of Jim Comey was a big deal. The disgraced NBC newsman reminded viewers that he’d been around Washington, D.C. for a very long time and Trump’s firing of Comey really wasn’t that surprising or even that influential.

Brokaw explained that comparing Comey’s firing to Nixon’s last ditch efforts in the 70’s is wrong and that the big difference here is that Nixon had no reason to fire Archibald Cox, but almost everyone in Washington, D.C. felt that James Comey should be fired.

The investigation had been going on for 18 months. There was nothing that Archibald Cox did that would justify his firing in the eyes of almost he have one including Republicans on that side. It was a much different kind of situation then. And the consequences were obviously very big.

At the same time, you have to remember that James Comey in the eyes of the Democrats was a very flawed director of the FBI. And it was funny to watch Mitch McConnell on the floor of the Senate in his kind of droll way saying, “This is a man that we were hearing from Chuck Schumer and others saying not too long ago that should not be in this job.”

And I think any objective observer would look at him the last 18 months and say he seemed not to be in his traces. That’s a horse phrase. He was out in his own terms. I was very disappointed early on. The FBI investigates, the Justice Department prosecutes. You don’t see the FBI director testifying before Congress.”