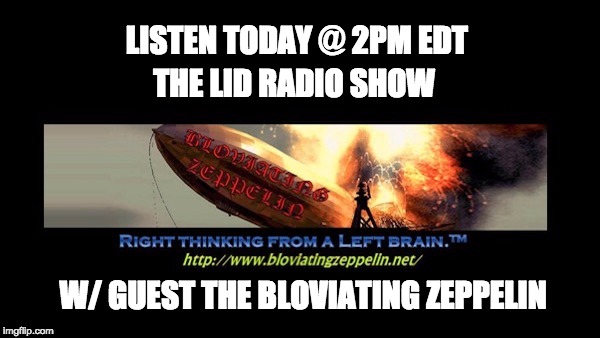 This week’s Lid Radio Show guest is BZ, the Editor/Publisher of the great website Bloviating Zeppelin  Host of the weekly show on SHR Radio:  BZ’s Berserk Bobcat Saloon, which can be heard on the SHRMedia  and High Plains Talk Radio networks every Tuesday Night @11pm Eastern.

BZ is a former Democrat in who saw the light. He is now a Conservative first and quite a distant Republican with a dash of Libertarian mixed in for good measure.

He is also  a recently retired US law enforcement officer, having worked 41 years for the FBI, the US Marshals, a coastal CA county and 35 years for a 2,000+ officer department in Northern California.

BZ is a true conservative, he believes in God, the strength of America, the brilliance of our Founding Fathers, the valor of our military, and the need for Leadership in all forms and on every level. He doesn’t believe censorship as he believes everyone on the Far Left has a God-given right to be painfully stupid — and he has the right  to expose that stupidity.

The Zep and I have plenty of left-wing stupidity to discuss, between the Hillary’s refusal to accept the fact that she lost because she was a lousy candidate who was out of touch with the people, the latest budget deal, will the House GOP’s inability to repeal and replace Obamacare, and so much  more

So be sure to tune in at 2pm Eastern by clicking on these SHR Media network or High Plains Talk Radio links (or use the player and chatroom below).

Wednesday and the podcast. I can be followed  @yidwithlid on twitter, on my site  Lidblog.com , on Facebook, and in the Jewish Star newspaper.